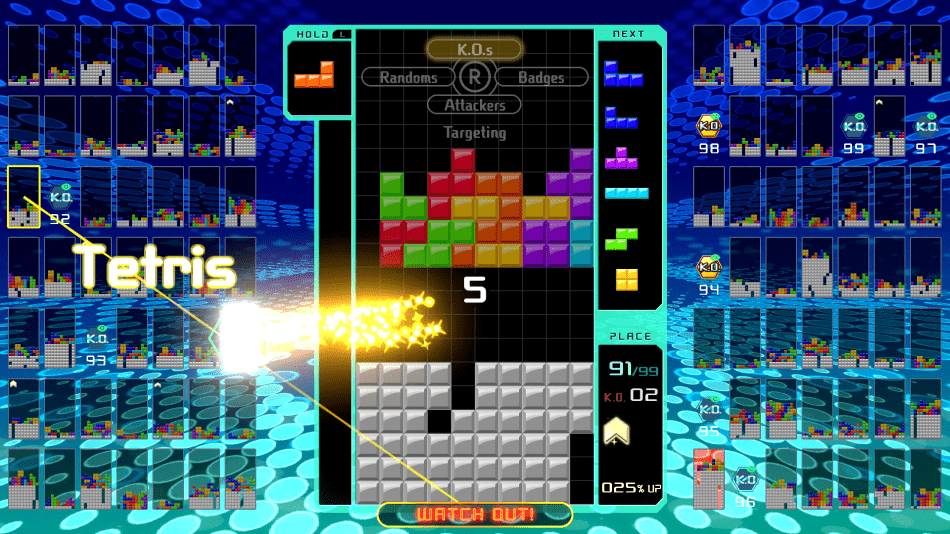 When our third national lockdown was announced for January 2021, I’m sure many of us began scraping the bottom of the barrel for things to keep us occupied. In the first lockdown, we had sunny weather and the incredibly convenient release of Animal Crossing: New Horizons which saved us all from going stir crazy, but by the winter months, this was wearing thin. Just how much more of our lives could we replace with building virtual snowmen and turnip trading?

This was something I was beginning to wonder before I somehow inexplicably fell down another wormhole on my Switch, this time in the form of Tetris 99.

First released in February 2019, Tetris 99 is a free game for Nintendo Switch Online subscribers, building on the recent popularity of battle royale games. Here, you enter a lobby with 98 other players and engage in a fast-paced, competitive game of Tetris, where every time you successfully clear a line, garbage is sent from your board to another player.

If you play well and send enough garbage over to your opponents, you have a chance of KOing someone. This gives you credit for causing the player to become overwhelmed by garbage and tetronimos when their blocks reach the top of the board, resulting in a game over. Upon achieving a KO, you acquire a badge which increases your attack power but also creates a double-edged sword of sorts, as the more badges you own, the more likely you are to get targeted by the remaining players.

A big hook aside from the addictive gameplay is the music

For how strange the concept of a Tetris battle royale sounds, the developers have done a great job at turning it into a genuinely enjoyable competitive experience. Before playing, I was new both to Tetris and battle royale games; I’m much more of a story-driven, single-player gamer, and memes have frankly turned me away from the idea of playing Fortnite for life. However, after playing a few rounds of Tetris 99 for fun with my brother over the Christmas holidays, I developed a sudden urge to get better at the game and achieve that coveted first place position.

A big hook aside from the addictive gameplay is the music. The game provides a great remix of the original Tetris theme that increases in intensity the longer you survive a match. This gets to a point where Rachmaninoff’s “Flight of the Bumblebee” plays if you’re skilled (or lucky) enough to get into the top ten, making the experience significantly more stressful as pieces start flying towards the bottom of the screen almost instantly adding a slight touch of humour when you step back and realise how absurd the whole thing is.

Every few months there’s an option to take part in a ‘Tetris Maximus Cup’, which allows you to play matches to win points that unlock new skins and music for the game, typically based on other Nintendo releases. It’s quite something to be playing Tetris with the choral battle themes of Fire Emblem: Three Houses in the background, or, more recently, the ridiculously epic heavy metal soundtrack to Bowser’s Fury – I can barely believe that that track belongs to a Mario game.

Tetris 99 has certainly kept me entertained during lockdown

With these events – plus daily challenges and a variety of DLC modes – it’s surprising how much of an incentive there is to keep playing this game. Though perhaps that’s just me and my overly competitive determination to finally achieve first place one day.

Tetris 99 has certainly kept me entertained during lockdown, providing a fun, straightforward game to pick up before having the option to either play casually with friends or go all out in your campaign to become the last player standing.

One thing’s for certain though, do not substitute this game for your daily dose of lockdown relaxation with Animal Crossing. If you’re as competitive as I am, and as mistake-prone, you’ll find yourself experiencing an embarrassing amount of gamer rage at this innocent little puzzle game, unable to listen to your favourite Nintendo soundtracks without imagining giant neon blocks falling on your head at impossible speeds…