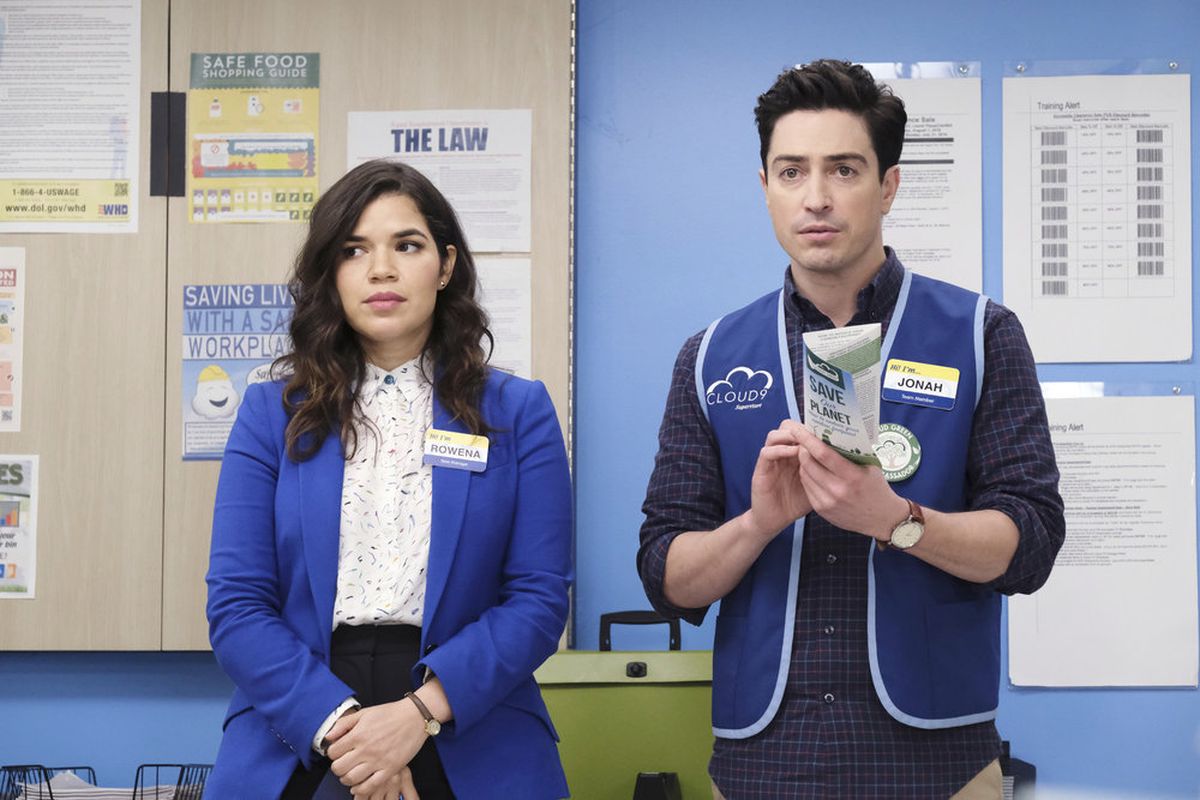 Ah, the irresistible allure of the workplace comedy! The romanticisation of the everyday, the joys of watching characters from different walks of life interacting in a “trapped” environment. A high ratio of hit comedy shows fall into this category – Parks and Recreation, Brooklyn 99, 30 Rock, Scrubs… the list goes on (and on). Viewers seem to have a fascination with the format and production companies are happy to oblige, with a seemingly endless variety of such series being released. One of the more recent offerings of the genre is Superstore, which premiered in 2015 and is currently wrapping up its sixth and final season. The show has gathered a sizeable following over its run, and with UK viewers now having access to the first five seasons via Netflix its audience is continuing to expand. But what’s made Superstore a hit over the huge variety of shows out there?

Aimlessly clicking between TV channels a few years ago, I stumbled across Superstore on Channel 4. I was hooked pretty quickly; the show’s writing is fast-paced, hilarious and balances one-off jokes with long-running gags. The characters are over accentuated enough to be funny, but realistic enough that you can emotionally invest yourself in their lives and problems. Thrilled that I’d finally found something worth watching, I raced through all the episodes available on demand before making the bold monetary decision to buy the first two seasons on Amazon. I then completely forgot about it until I saw that all available seasons were streaming on Netflix and, regretting my younger self’s financial choices, I’ve fallen back in love with the show.

The characters are over accentuated enough to be funny, but realistic enough that you can emotionally invest yourself in their lives and problems

Part of Superstore’s appeal lies in its refusal to shy away from serious issues. In recent years, more and more “comedy” shows have chosen to tackle social and political issues in a genuine way, to varying degrees of success. Whilst this can sometimes come across as performative, Superstore manages to strike a balance between laugh-out-loud dialogue and well-considered social commentary. Across the show plot lines cover gun laws, the US immigration system, worker’s rights and more, with these issues being written in a way that gives them the appropriate gravity whilst maintaining the lighthearted tone of the show – it is, after all, a comedy. Many have also praised Superstore’s diversity – the show’s wide range of characters is primarily a far more realistic representation of the world than is seen on many screens, and also allows for sensitive discussions of issues of class, race, gender, age and sexuality. One of the reasons Superstore has had such praise in this regard is the sincere way it handles what may be seen as difficult topics, without seeming like it’s trying too hard. Nothing feels forced – real-life issues aren’t clumsily shoehorned into plots, but instead feel like an organic progression of the narratives.

There’s been a good deal of comparisons made between Superstore and The Office, but is it fair to liken the two? It seems inevitable; they share a similar setup, and The Office has (for better or worse) become a benchmark for judging the workplace comedy genre. In reality the shows are completely different in tone, and citing Superstore as a kind of spiritual successor to The Office seems reductive. The latter’s huge success has made it a somewhat polarising cultural entity, with the show being decreed as either “basic and overrated” or the peak of TV comedy; either way, with its presence in mainstream culture, no show can escape a comparison. Hopefully one day a workplace comedy show will be able to exist and be judged free from the shadow of The Office, but as of now that day appears to be in the distant future.

Nothing feels forced – real-life issues aren’t clumsily shoehorned into plots, but instead feel like an organic progression of the narratives

Personally, if I had to compare the two, I think that Superstore is the superior show. It’s genuinely hilarious, with physical comedy paired with well-written dialogue and an excellent cast of characters. If you’re looking to binge watch something to cheer you up and distract you from all the current horrors of the world (or if you just want to procrastinate from your essays), I would absolutely recommend that you give Superstore a go. And if you don’t like it, you could always Tweet about how nothing will ever be as good as The Office.