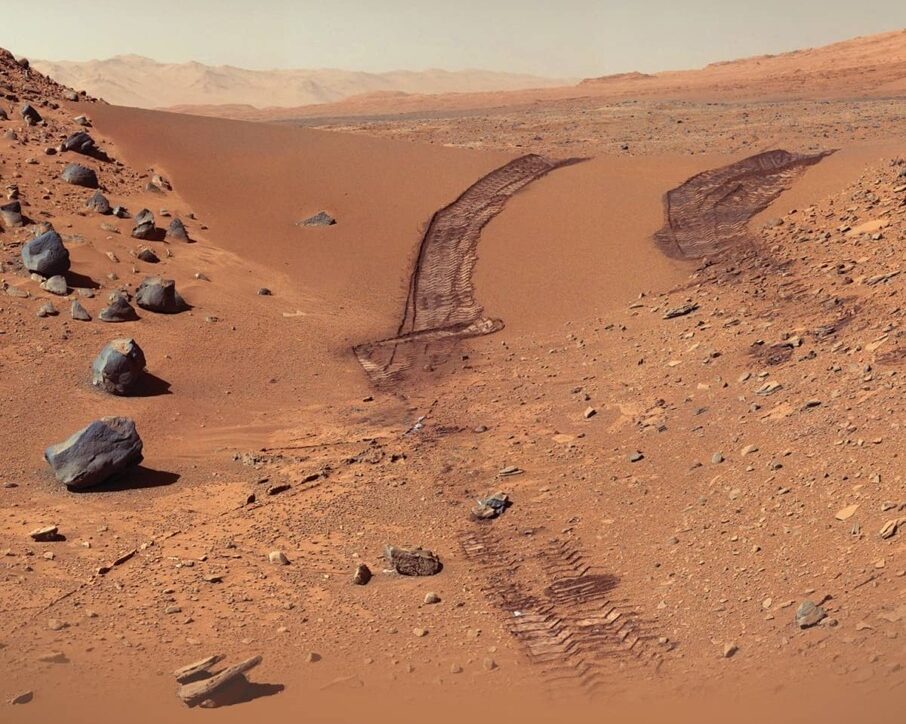 The Perseverance of Mars through science fiction

Mars has long held a special place in the hearts of humanity. As our neighbour just a step further from the Sun, it has often seemed so close we could touch it, despite appearing only a dusty red speck on the night sky. It has always been a case of so close and yet so far, but in recent years, it seems to have become more and more accessible.

Last month, NASA successfully took another major step in the exploration of our Solar System when the team at the Jet Propulsion Laboratory landed their fifth rover on Mars’ surface. With its landing, Perseverance joined Curiosity, Spirit, Opportunity and Sojourner as the newest member of the Martian population – I think the names of these rovers capture our fascination perfectly.

In early works of science fiction, Mars was much more a playground for the imagination than it is today

Carl Sagan summarised it very succinctly in a quote from Cosmos, his educational book and TV show. He said: “Mars has become a kind of mythic arena onto which we have projected our Earthly hopes and fears.” Long before we could study it physically we had allowed our minds to run wild over the Martian surface, trying out scenarios and asking the question, “what if?”, over and over again, but the Mars we know today is not quite the one we used to dream about.

In early works of science fiction, Mars was much more a playground for the imagination than it is today. Now, we are sometimes burdened by the reality and truths we have become familiar with, whereas in the past we were free to roam and wander.

In the past, mythic heroes like John Carter of Mars have leapt across the Martian surface, living among the existing peoples already inhabiting the planet. H. G. Wells may not have actually written about Mars but he imagined Martians and, in The War of the Worlds, asked how different and incompatible we may be as two different species. Both of these stories use historical settings that now seem rather outdated and romantic, but our obsession with Mars has not disappeared.

To these authors, Mars added an element of realism to their novels as it was, by the time of their careers, not so farfetched to imagine a manned mission to such a place

In The Martian Chronicles, Ray Bradbury displayed Mars through a haunting set of short stories. He imagined our first dreams of the red planet, our first visit, our first colonisation attempts and then he imagined the end and humanity’s failing. There is something of a nostalgic tone to his style of science fiction now, but many of the questions he raised about invasion in the name of scientific advancement still resonate today.

Then the classic science fiction writers of the late 1900s, people like Arthur C. Clarke, Robert Heinlein, Philip K. Dick and Isaac Asimov, reassessed Mars once again. They often used it as a first point of colonisation and they used Mars as a platform to investigate the development of colonies beyond our own atmosphere. To these authors, Mars added an element of realism to their novels as it was, by the time of their careers, not so farfetched to imagine a manned mission to such a place. They often imagine what the different architecture, customs or expectations of a Martian society would be like but still had the freedom to indulge in their fantasies of space travel.

Double Star is a personal favourite. Heinlein writes about an actor, stolen away from his mundane life to stand in for a public figure on Mars. It’s a simple story and doesn’t invest too much time in the planet itself, but I loved the aspects of the Martian culture that Heinlein brings to life and how odd they appear from an Earth-bound perspective.

Then, in the more modern era, Mars has changed its face again, but not necessarily for the worse. In Kim Stanley Robinson’s Mars trilogy, he writes about Mars as though telling the history of the future. Sometimes his work seems to get bogged down in scientific details but beneath it all, the slow burning development of his civilisation over years and years is impossible not to imagine as real. He writes with such certainty and scientific assurance that he can make you believe this really did happen.

And of course, The Martian, proved that you can allow for elements of reality without sacrificing a thrilling story. Andy Weir did his research and presented an astronaut’s struggle to survive alone on Mars with nothing more than a series of journal entries from the red planet. Here, the realism only adds to the suspense rather than stealing away from the fantasy of the story. However, it’s a relief to see in stories like Leviathan Wakes (the first in the Expanse series) that we can still choose to abandon physics for a while, throwing ourselves into the future without the bounds of science for the thrill of adventure and interplanetary politics.

Yes, our imaginary character of Mars has changed a lot since we first viewed it. Countless books of non-fiction have come out alongside the fiction and these are each just as fascinating as the fiction itself. The Case for Mars was one of the books that Andy Weir read in research for The Martian; in it, Robert Zubrin presents Mars as the ultimate adventure without any fiction. He works step-by-step through the process that could perhaps have already landed us on Mars, and it’s impossible not to get swept up in the intrigue of it all, despite it being a non-fiction book.

Mars remains very much alive in our imaginations. It still holds so many mysteries that are fertile grounds for the fiction writers, but the truths we have uncovered have made the real life history of Mars just as fascinating. Who knows what we may discover about it next, whether there once was some form of life on the planet or even just where our fictional imaginings of it will lead. It really is the ultimate ‘mythic arena’ and I think it helps us keep our love for science alive and fighting.