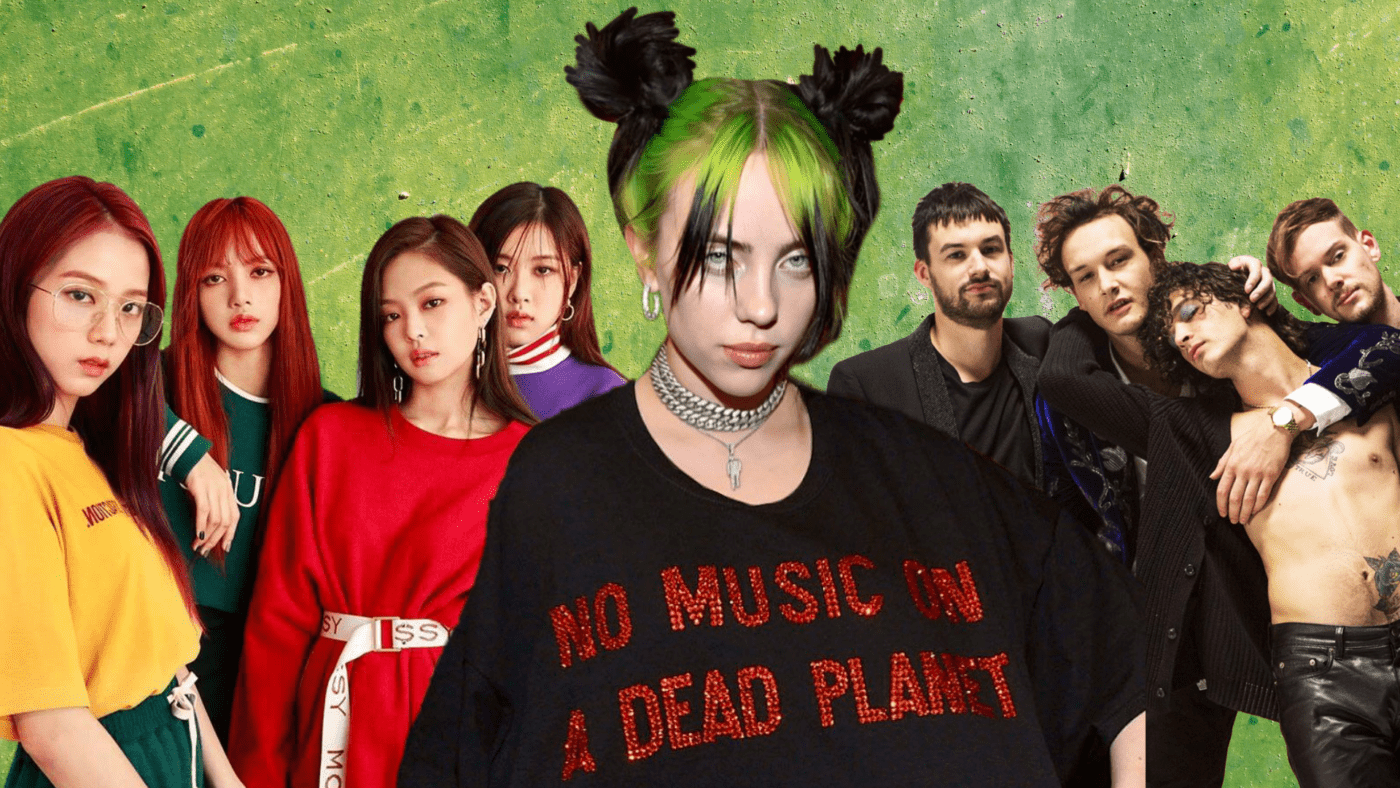 As we’re itching to get back to seeing our favourite bands at festivals and concerts, the environmental impact of live music is not the first thing on our minds. Yet today, more and more artists are using their music to confront the climate crisis, for example The 1975 collaborating with Greta Thunberg to declare: “It’s time to rebel”. Should artists go further and make their tours more sustainable? Or should the government step in and take some responsibility?

Enter K-Pop girl group BLACKPINK. Appointed ambassadors for the upcoming UN Climate Change Conference COP26, the group’s promo video called for fans to “join us on this journey” of climate awareness, reaching 10 million viewers. Having influential pop artists vocalise the need for change, particularly as part of an official state summit, represents progress from an easy but hollow tweet of support. However, it remains to be seen what real action will come of this, as there’s little information about how BLACKPINK are improving their own tours and whether they’ll be able to influence the big powers at the summit.

[Music Declares Emergency] offers a green-rider guide for artists to make their touring more sustainable, from the obvious of limiting flying, to asking venues to provide water taps to refill bottles

International touring inevitably gives artists a large carbon footprint. With the biggest acts having followers across the globe, it seems cruel to deny fans and artists the electric experience that is live music. The music industry is, however, awakening to the harmful effects of touring, with Coldplay refusing to tour for their 2019 album Everyday Life and Foals’ Edwin Congrave saying: “I think that it would be quite easy for us and a lot of bands to tour differently… I don’t want to fly ever again”.

Responding to the need for change in the industry, Music Declares Emergency (MDE) was set up in July 2019, comprising 3963 climate-aware artists and organisations such as Radiohead, Mogwai, The Wombats, and the BRIT awards. MDE acknowledges that the music industry should be greener and calls for government intervention. The organisation offers a green-rider guide for artists to make their touring more sustainable, from the obvious of limiting flying, to asking venues to provide water taps to refill bottles.

Although some of these changes can be made relatively easily, putting all responsibility on artists could become problematic if we consider the financial implications of sustainable choices. Without cheap flights, touring would be impossible for artists who are just starting out and pickiness over sustainable venues cannot be expected when they are grateful for any kind of exposure. Coupled with the inability to tour over the past year due to Covid-19, many artists are threatened enough as it is. That isn’t to say that bigger artists who can afford to be a bit more considerate shouldn’t be leading by example.

Perhaps only when the music industry is in a safer position can we hope for any improvement that would see bands supported in sustainable travel, funding for renewable energy in venues, or regulating greener and plastic-free festivals

Despite MDE’s calls for government action, there seems to be no evidence of government support. Unfortunately, due to the coupled crises of the pandemic and Brexit, the focus of the debate around the music industry has become on saving it rather than making it more sustainable. With the threat of smaller venues closing and the lack of governmental support for artists to tour without visas, there seems to be little hope for further intervention. Perhaps only when the music industry is in a safer position can we hope for any improvement that would see bands supported in sustainable travel, funding for renewable energy in venues, or regulating greener and plastic-free festivals.

Thankfully, awareness of the climate crisis is increasing due to musicians like BLACKPINK and Billie Eilish (who committed to a green tour for 2020). Fans can also help the struggle by using public transport to get to gigs and looking out for recycled packaging and merch, like The 1975’s decision to screen-print unsold band merch to reduce the production of new t-shirts. The responsibility does fall on artists to improve their carbon footprint, with the more affluent artists ideally leading the charge. Given the struggles currently facing the music industry, however, it’s difficult to imagine real change without acknowledgement and support from the government.