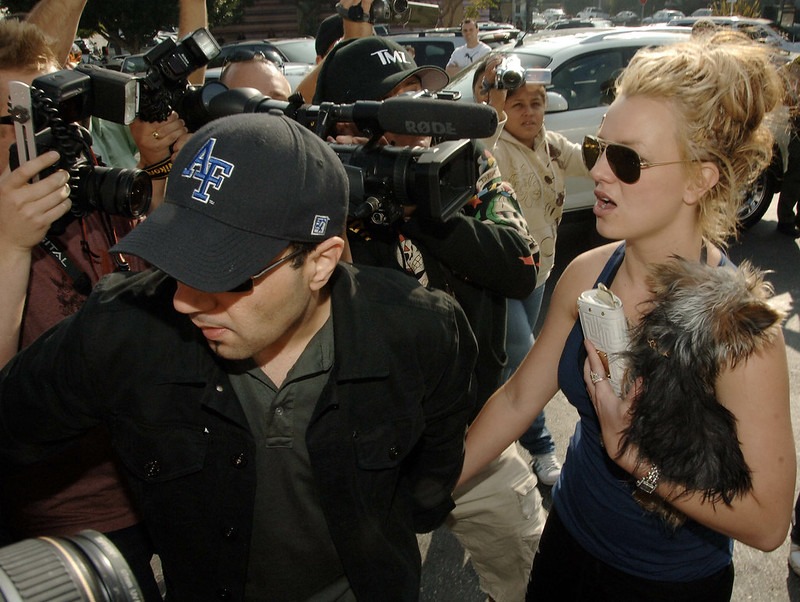 The legal concept of conservatorship in the US was one I was unfamiliar with until my social media was bombarded by the #FreeBritney movement in July 2020, with an increasing concern over Britney Spears’s legal status. Conservatorship is the legal process where a guardian/protector is appointed by a judge to manage the financial affairs and/or daily life of another. Typically, this is due to physical or mental limitations or, most commonly, old age, making Britney’s case so unusual.

Cringing at intimate images of Spears recirculating on twitter, reminiscing on my childhood love for Britney and iconic hits ‘Oops!… I Did it Again’ to ‘Toxic’, I was spurred to watch the anticipated New York Times documentary Framing Britney. I offhandedly announced my interest to my parents and was surprised at their willingness to join me – ‘Hit Me Baby One More Time’ is not your typical family soundtrack. Of course, the subject goes beyond her popularity, it tackles the complex legality of conservatorship and Britney’s path to self-determination in her career and life. So, we all sat and watched as this documentary depicted the disturbing lack of control Britney experienced in regard to her life choices and finances, under the conservatorship of Jamie Spears, her father, and co-conservator Andrew Wallet, yes Wallet.

Britney was constantly being framed, whether she was being portrayed as the sweet all-American, girl-next-door; or a whore, homewrecker, and heartbreaker

The documentary succeeded in revealing the extent of Britney’s powerless status under the conservatorship of her father, who suspiciously had no previous active role in her life, as she lost responsibility over career choices and even her own children. Yet it wasn’t merely this conservatorship that left her disenfranchised, the media’s role was glaring. Their scrutiny was portrayed as equally harmful. The title captures this hostile treatment of Spears: in tabloids, newspapers, on talk shows, gossip reels, and interviews. Britney was constantly being framed, whether she was being portrayed as the sweet all-American, girl-next-door; or a whore, homewrecker, and heartbreaker.

The documentary didn’t overexert itself in condemning the media, the harassment and bullying is so stark. These clips of the paparazzi’s constant harassment causing my dad to put down the newspaper and give Britney his full attention was proof of this. From Gen X to Z, the cruel treatment Britney endured at the hands of the media captures the attention of all viewers. This documentary combined a generic, netflix-esque documentary score with a simple structure of interviews, with vaguely relevant personnel, archived footage of Britney’s performances, and interviews and displays of legal facts about the case. Consequently, Framing Britney Spears is not a ground-breaking piece of television, nor did it offer viewers more information than a simple google search would have provided. But it didn’t need to be. The collated footage of the paparazzi harassing this young woman was sufficiently captivating and had both generations cursing at the TV in defence of, now, our pop princess.

It’s made clear that the media’s glare followed Britney for decades. At aged 10, Star Search’s 60-year-old host, Ed McMahon, asked her to be his girlfriend live on air. Later on, the toll of living in the limelight caused her public head shaving incident and her physical attack on a videographer’s car. Despite my parents’ frequent criticism about the irrelevance of selected interviewees, badgering me with “who is that?” as if I had personally helped create this documentary, the Times managed to exclusively interview this videographer. His absolution on behalf of himself and the media was shockingly portrayed. “She never told us to go away” he protested. The director corrects him off-camera, and the footage itself shows viewers Spears’s discomfort and arguments with paparazzi over the years, yet he defends “well, she said only for today”. The detrimental, long-term effects of the media’s scrutiny were lost on him, it was normalised.

Ironically, this excessive interest or concern from fans may have saved Britney

Female celebrities like Spears, Amanda Bynes, Lindsay Lohan, and countless others were painted as deserving. Perhaps for their celebrity but mainly because they were women. They were vilified by interviewers and parents in ways that their male counterparts were not, with mothers admitting they would “shoot [Britney] if [they] could”.  The documentary displays this shocking admission being revealed to Spears in an interview, her interviewer visibly smug at Spears’s horrified reaction. Britney’s famous lyrics seem to sum up this interaction with the media, “Don’t you know that you’re toxic?”. This moment encapsulated the media’s toxicity, their greed for any reaction from Britney. Of course, the demand was there. Supporters or haters, in the early 2000s it seemed the whole world wanted information, from pregnancies to divorces, break ups to breakdowns.

Ironically, this excessive interest or concern from fans may have saved Britney. The emergence of the #FreeBritney campaign has inspired protests to podcasts, placing Britney’s conservatorship case under intense scrutiny, a scrutiny not too dissimilar from the kind she experienced from the media for most of her life.

Diversity’s call for humanity to unite was tarnished by ignorance