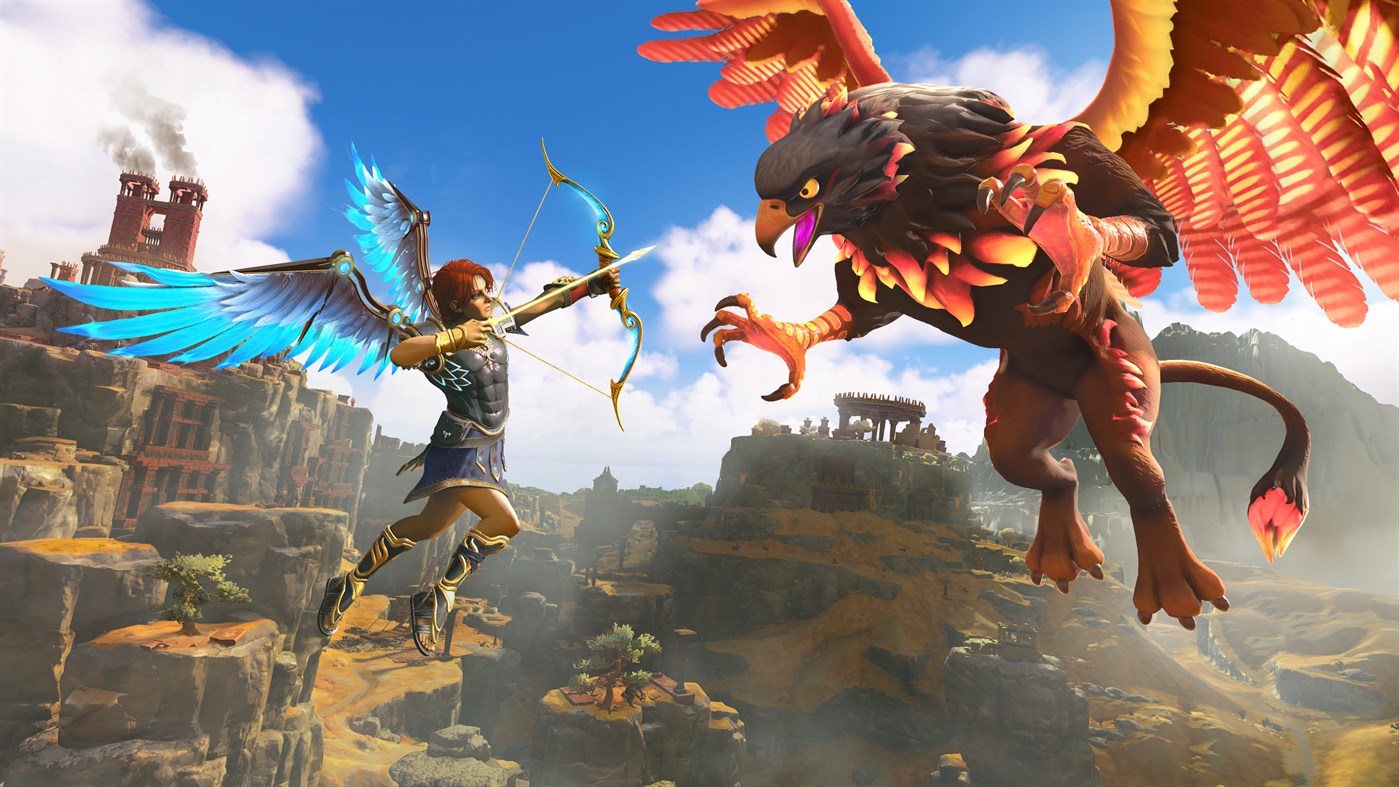 Immortals Fenyx Rising, Ubisoft’s newest IP, was released as a cross-platform video game at the start of December. Despite its charming nature, it did not receive nearly as much attention as it deserved, overshadowed as it was by the release of Cyberpunk 2077, published just days after Ubisoft Québec’s game. This is a pity since Immortals – although by no means perfect – is certainly deserving of a bit more love than the one it has up to now had.

To be sure, the premise of the game is by no means ground-breaking. You play as Fenyx, a young Greek shield-bearer who finds themself shipwrecked on an island, only to discover that all its inhabitants (and the main character’s crewmates too) have been turned to stone. Later on, you learn that the Titan Typhon is the one responsible, and you consequently embark on a quest to stop him, recruiting to the cause various ancient Greek gods and goddesses in the process.

Having said this, where the game veers away from what one would traditionally expect is in the choice to present the entire adventure as a narrated story, a task taken up by the mythical figures of Prometheus and Zeus, whose comments are frequent during the main character’s quest, making the player feel constantly observed. This choice is particularly imaginative and gives flare and character to a story that might otherwise appear – in theory – uninspired.

From Aphrodite’s beautiful eternally-blooming valley, to Athena’s temples…there is always something new to behold.

For there is no point in denying that in part, the game was created to bank on the success of The Legend of Zelda: Breath of the Wild, Nintendo’s hugely successful 2017 open-world game. Yet one still feels that the developers put a lot of love in the story and its surrounding elements. Sure, there are definitely multiple elements in common between the two games, as in the Tartarus Vaults (taking the place of BOTW’s shrines), the character’s abilities (known as Godly Powers, and similar in logic to the abilities bestowed in BOTW by the Sheikah Slate), the stamina (although it is a bit less punishing in Immortals) and so on. Yet, the game is sufficiently inventive to make up for these “borrowed” features.

For starters, it absolutely abounds with things to do. If one of the main criticisms of BOTW’s Hyrule is that it was beautiful but empty, in Immortals’ case the island is BOTH beautiful and brimming with things to do. Not only are there plenty of puzzles (known as Myth challenges), but they are also varied in their nature and aims. For example, you might be asked to rebuild a constellation by searching for dark blue orbs in the surrounding area (meant each to resemble the star that makes up the constellation in our skies), or you might be requested to move puzzle blocks around to create a complete picture, or demanded to ace some archery challenges. There is always something to do, and you are guaranteed to never feel bored. As if this were not enough, you are actively encouraged to take part in these challenges, as they enable you to receive items that you can then use to power-up Fenyx’s various stats. In the process, you also learn something new about ancient Greek mythology, like most challenges, once completed, are accompanied by a brief explanation, courtesy of Prometheus and Zeus. Alternatively, you can go on a hunt for treasure chests, in which you are guaranteed to find useful materials and, in some cases, weapons and clothes too!

Obviously, all this would not be enjoyable if the island itself was not gorgeous, visuals-wise. Well, rest assured that this is not the case. I have no other word with which to describe the environments than jaw-dropping. The ecosystem is varied and rich, changing depending on which area you are in, as the latter are each inhabited by a different god or goddess, all of which have their own personality and powers. Walking around the island, you truly feel to have stepped into paradise (if you ignore the monsters freely roaming about).

From Aphrodite’s beautiful eternally-blooming valley, to Athena’s temples-full region, to Hephestus’ desolate region populated only by inactive automatons and the occasional forge, to Ares’ unforgiving and harsh den punctuated by the god’s spoils of wars and by never-ending crevices guaranteed to take you straight to the Tartarus, there is always something new to behold. Monuments modelled on those found in ancient Greece are present everywhere, and I had no difficulty in feeling as if I had stepped back in time. Exploration at night is particularly recommended, as the star-lit sky is absolutely gorgeous and stunning to contemplate.

As for the characters appearing in the story, to be honest, they are quite cartoonish but are clearly intended to be so. Apart from Zeus, whose jokes I often found to be quite corny, I genuinely enjoyed the other characters, and I found them to be developed quite well. With regards to the vanished gods and goddesses (who you are tasked with finding), the latter’s own personal vaults I found to be definitely a highlight, as they each reflect in their structure the personality of their host, and while exploring them you are able to hear their most inner feelings, and – at least for a moment – the atmosphere isn’t nearly as joyful as the game strives for it to be. I cannot even begin to tell you how bad I felt for Hephaestus’ personal woes.

As mentioned above, I consider the voiceover by Zeus and Prometheus to have been (mostly) a winning strategy. For during your exploration, solving challenges or just simply stumbling across some locations exposes you to an explanation by them of a chapter of Ancient Greek mythology. The latter is entertaining and hardly uninteresting. As someone who deeply loves ancient history, I absolutely adored this choice, and was never tired of receiving clarifications on the meaning of some statue, or on the role in the mythology of one of the many Legendary bosses you encounter throughout the game. The latter is another plus of Immortals, as across the island you find, in addition to the “normal” enemies, legendary ones, each with its own array of abilities and moves, and whose vanquish provides you with glory (and a more tangible prize). A sub-quest also allows you to battle heroes of ancient times, rewarding you in a pretty impressive manner for overcoming them all.

The gameplay in itself is quite fun, and follows a slightly different logic from BOTW, as you can stun enemies. Weapons don’t break (finally!) and you have access to a Skill Tree (similar to the one found in Assassin’s Creed games), so there is a sufficient difference to make this game not feel like a blatant copy of BOTW.

Naturally, there are a few flaws in a game that I otherwise found to be pretty top-notch. The default mapping of the control buttons is quite bad. I often found myself doing something completely different from what I intended (say, destroying a wooden box instead of raising it to carry it around) not because I am a terrible player (at least, not in this case), but rather because of the buttons being pressed in a different order than the one required. This was a frustrating issue I have never had before with a game, and one that I think could have been dealt with during the game’s production.

The characters’ animations sometimes felt quite stiff and weird but, most importantly, I felt the lack of NPCs in the game to be a disappointing flaw. Sure, this has a justification in-story, but I found that regardless, it wasn’t ideal. It makes the island look beautiful but lifeless, and I found it hard to get invested in the tragedy that had befallen it, since it seemed to me be more of a private playground for the deities, than an actual inhabited island. Having the additional voiceover from Zeus and Prometheus partly alleviated this feeling, but it didn’t completely make up for the pervasive loneliness I felt while playing.

The last significant issue I had with the game relates to the gods themselves. Regardless of the behaviour they have in-game (sure, it would have been nice to have a slightly darker atmosphere, but I cannot criticise the developers for choosing the opposite direction, and by the end the game definitely up the stakes, and tension is palpable), I find it mind-boggling that there aren’t more deities. Naturally, you cannot include them all, but I found it weird to say that some significant characters like Poseidon and Hades did not appear in the game but were just mentioned en-passant. Same goes for Hera. The developers have stated that most missing deities will appear in the soon-to-be-released DLCs, but I’m not quite sure I am hugely happy with this decision. I feel that some sort of explanation should have been presented in the original game, and not hidden behind a paywall (but after all, it’s Ubisoft we are talking about).

Overall, then, I found Immortals to be quite a good game and promising as Ubisoft’s next big IP. It does lack in some respects, but I do think it’s quite the experience, and I would certainly recommend it to anyone looking for a high-standard open-world adventure.