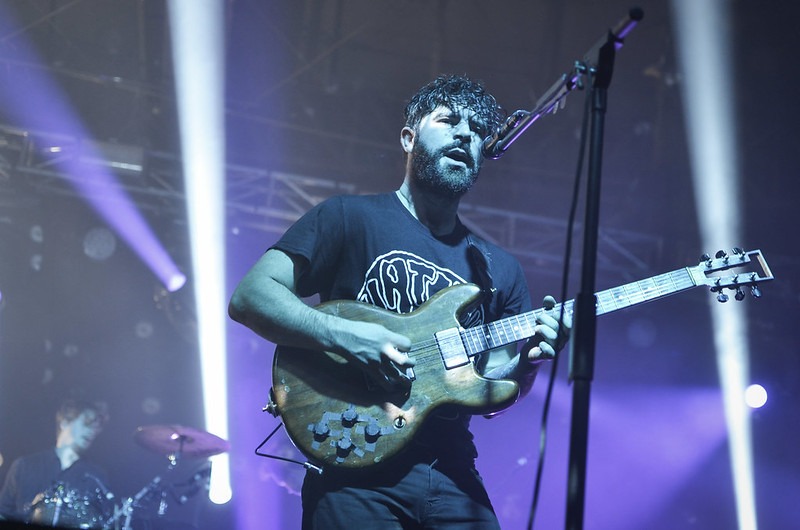 In the wake of their 2019 double-album Everything Not Saved Will Be Lost Parts 1 and 2, and accompanying world tour, alt-rock band Foals have released a series of stripped-back CCTV and Poolside Sessions alongside unreleased B-sides to satiate fans over lockdown. Listening through the 30 tracks on the ‘CCTVs & B-sides’ playlist is an opportunity to revisit each era and see the change their sound has undergone, from math-rock, to indie, to alt; Foals have been on quite a trajectory since their debut 13 years ago.

Salvaged from the Antidotes era, ‘Dearth’ is typical of that first album’s math-rock frenzy. Through energetic strumming and mind-bending pick patterns, the band manage to make ‘Dearth’ sound like a machine in melt-down. It’s an apt sound for a breakthrough album, and ‘Dearth’ is a great relic from the nebulas.

Second album Total Life Forever saw the band shift gear, adopting a more lo-fi/indie sound, and ‘Wear and Tear’ is a great mix of everything TLF does well: hazy vocals, warped guitars and punchy basslines. Almost every Foals song reaches what you might call a chaos point, and ‘Wear and Tear’ is exemplary of this – beginning dreamy, until given teeth by its bassline and drumbeat, playing with building and layering. It’s another treasure from the vaults.

My favourite by far, however, is ‘Bluebird’, a track that missed the cut on Holy Fire. This haunting indie-rock track runs purely on tension. It begins with one echoing guitar note, then layers of vocal harmonies, reverbing guitars, and synth throbs lead the song to overwhelm, from which point it deconstructs itself. Other Holy Fire tracks like ‘Milk & Black Spiders’ and ‘Bad Habit’ work really well in the CCTV format; the intimate performance, and stripped back arrangements complement the reflective mood of the album.

Holy Fire celebrated its eighth birthday this February and in retrospect, it reads as a turning point in Foals’ sound: it’s a real coming-of-age album. While in Antidotes and Total Life Forever individual tracks can seem to merge into one texture, Holy Fire trialled the interplay of reflection and rage, placing guitar heavy tracks like ‘Inhaler’ alongside more lo-fi sounds like ‘Moon’. ‘Bluebird – B-side’ embodies what first drew me to Foals’ sound: the darker moments of emotional intensity.

Reflecting on old eras reveals how Foals are constantly looking forward to something bigger, newer, rather than repeating a successful formula

Out of all the sessions, ‘Give It All – Poolside Sessions’ stands out. The sessions see Philippakis and rhythm guitarist Jimmy Smith swap out Jack Bevan’s distinctive drum style for a dusty drum machine, little more than a glorified metronome, but when layered with a looped synth, hazy keyboards, ‘Give It All’ takes humble shape. This rework doesn’t change too much from the album version, however the performance is really special. I’d urge you to watch it. The contrast with the pared-back instrumentals draws focus to Philippakis’ stand-out vocals and lyricism. By candlelight, beside a luminous blue pool, his lyrics are laid out in all their intimacy.

‘Exits – CCTV’ is one rework that fails; changing a punchy alt-rock track into a piano ballad loses something in translation. However, I can’t help but admire how Foals radically reimagine their songs in the CCTVs. Even though they aren’t representative of what this band can achieve when working at their zenith, the sessions do present an interesting format; there’s a voyeurism to watching Philippakis and Smith in the rehearsal room, a world away from the intensity of their live shows.

There is something special about the videos for the CCTV and Poolside sessions, especially when compared with the drama of their recent tour documentary, ‘Rip Up The Road’. Something that jars watching ‘Rip Up’ is their occasional egotism (at one point Philippakis described feeling like a ‘witch-doctor’ on stage). However, I think that egotism is a by-product of how seriously they take their craft, and how determined Foals are to continue their skyward trajectory. In ‘Rip Up’, Smith said his goal was to write the best Foals album of all time. That seems to be a goal perpetually set, and perpetually fulfilled throughout the band’s career, although Everything Not Saved has proved to be their best-received record to date, winning them an NME award for Best Live Act in 2019 for part one and a Brit Award for Best Group in 2020.

Nevertheless, the band never stop to dwell on success. Reflecting on old eras reveals how Foals are constantly looking forward to something bigger, newer, rather than repeating a successful formula; you can feel tectonic movements between albums. Foals stand out from their contemporaries as a band set alight by creative compulsion. They never stand still. The process translates into the product, meaning there is a real emotional intensity to their music.

Taken in the right way, these releases make great listening. The band have been clear that these sessions are not the pre-cursor to an album. In an interview with NME, Philippakis revealed “we’ll start making a record this year but I don’t know when it will be ready. We’re going to start putting our heads together and there are lots of exciting and promising starts.” With guitarist Jimmy Smith posting music-making sessions on his Instagram this week, something definitely seems to be in the making, but they’re in no hurry. Although I’m not hopeful for the gig I have tickets for in May, the promise of a new album is certainly something to lift the lockdown gloom. Philippakis said in ‘Rip Up the Road’, “I feel that the best song that we will ever write is still ahead of us” – I can’t be the only one who finds that prospect intoxicating.