Thomas Tuchel has had a relatively successful start to his Chelsea tenure, with a 0-0 draw against Wolves and a 2-0 win against Burnley. Against both teams, Chelsea saw the majority of possession and thus we can draw inferences regarding how Tuchel wants his team to play.

Tuchel has started Chelsea times in a 3-4-2-1 on both occasions, with the two players behind the striker staying fairly close to him and the wing-backs pushing up in order to make the formation look like a 3-2-5 while in possession.

Jorginho and Kovacic have been employed as a double pivot, dictating the tempo of the play in both games. The centre back three have been Azpilecueta, Thiago Silva and Antonio Rudiger.

When playing against Wolves, matching their 3-4-3 was certainly a sensible idea tactically. Against Burnley, a 3-4-2-1 made sense to stretch out a team who wish to defend in a compact 4-4-2 via the use of the wing-backs, something Chelsea managed with Callum Hudson-Odoi and Mason Mount on the right side of the pitch to great effect.

Once Hudson-Odoi was replaced by Reece James, this right side continued to be an issue for Burnley. Both goals against the Lancashire outfit came from use of the wide spaces, with wing-backs cutting in to create goal-scoring opportunities.

Much has been made of the German connection, with the hope being that a compatriot as manger will allow Kai Havertz and Timo Werner fulfil the potential of their price tags. So far, Havertz has appeared in both games while Werner played the full 90 minutes against Burnley. Their form was not going to change overnight, but there are sign that (as with the rest of the Chelsea team) they will grow into their new roles under Tuchel.

A key issue that Chelsea had against Wolves was a lack of mobility, which was partly because Oliver Giroud and Hakim Ziyech played prominent roles. Giroud is a target man who is not particularly mobile himself, thus he wants to hold up the ball and create chances for teammates moving into space he has created by drawing out defenders. Ziyech, similarly, likes to cut in from the right wing and pass into players who are making runs.

All Wolves had to do was sit back and watch Chelsea grow impatient with speculative efforts on goal. This led to Chelsea totalling 0.73 expected goals (xG) with 14 shots. Wolves themselves managed 0.68 xG with only 4 shots. Had Raul Jimenez not been injured, Tuchel may have had an unceremonious arrival in the Premier League.

Some speculated whether Mason Mount’s place in Chelsea’s starting XI would be gone once Lampard was out the door, however he did start against Burnley and came on as a substitute against Wolves. In both appearances, his work rate and willingness to get the ball forward has reminded everyone that he got into the Chelsea team on merit and hard work.

A lot of people have been quite rude about Werner, regarding him as a flop who can’t score goals in English football. Werner is clearly a talented player, however, as every striker does, he is going through a rough patch. Chelsea is an unforgiving place for strikers, ask Fernando Torres.

Werner is constantly pointing into space, asking for the ball to played in behind. His expected goals tally shows that the German has been unlucky this season, scoring 4 goals from 7.23 xG. I have confidence in him ending his dry run, as long as others on the pitch feed him with the passes that he is capable of turning into goals (as seen during his time in Germany).

Chelsea’s double pivot, even though it consists of players quite capable of making play between the lines, was underwhelming against Wolves. Thankfully, against Burnley, their passing was much more inventive, with cross-field balls managing to catch Burnley out and creating chances for Chelsea.

Chelsea’s centre backs have so far not been tested much. They have conceded five chances in two games, mainly due to their opponents’ lack of quality. Chelsea’s pressing thus far has been impressive, leading to many turnovers in possession in the final third against Wolves and forcing Burnley into playing long balls frequently.

Overall, Tuchel seems to want to develop an aggressive, high-tempo side who are active in creating chances, hopefully this is achieved and Chelsea become a more entertaining side to watch. Their defence has not been tested so far, hence it will be interesting to see what happens once they are against opposition who are not scared to attack Chelsea. 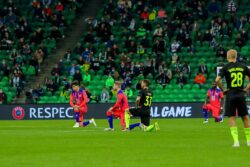