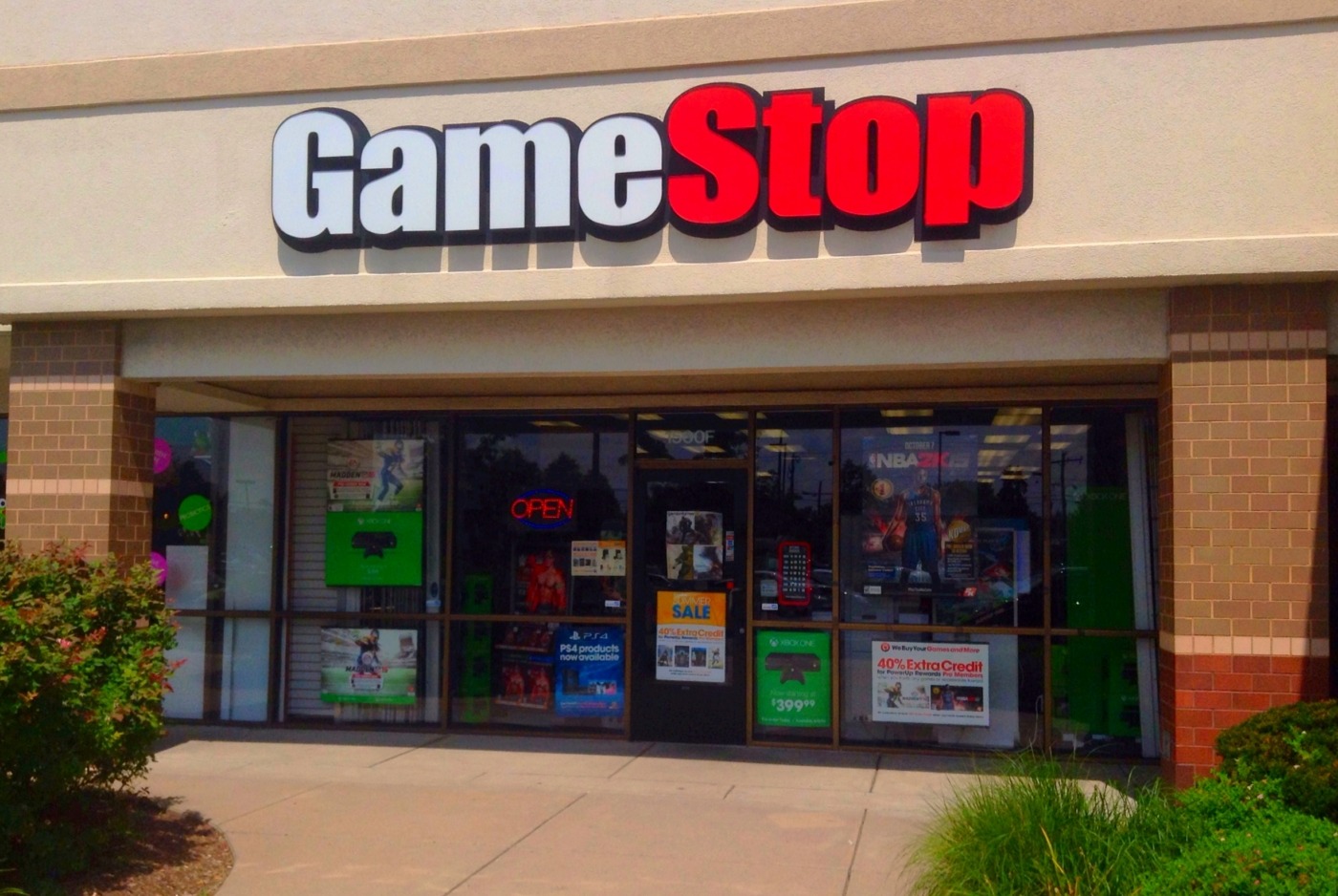 Amateur traders boosted the stock price of GameStop (GME) against the will of major hedge funds and professional investors. The value of GameStop has risen over 1,700% since December, as Wall Street investors lose millions from the unprecedented activity of “casuals”. GME was the most traded commodity in the US until restrictions on its trading were put in place.

Once a common sight in US shopping malls, GameStop has been financially troubled for a while, recording huge losses at the end of last year. The Texas-based video game retailer’s decline was accelerated due to the Covid-19 pandemic, as their shares hit a low of $2.57 last year. With fewer shoppers on the streets, many high streets and shopping centres have suffered exponentially. However, the pandemic and its ensuing restrictions only accelerated the fate of GameStop. The retailer has also been the victim of a video games industry that is slowly transitioning itself away from hardware, discs included. This was epitomised by Sony releasing a version of the PlayStation 5 without a disc drive (this version is cheaper). In all, it seemed that GameStop was quickly on its way out of everyday shopping malls, sadly following the paths of its other disc-reliant predecessors Blockbuster and HMV.

With confidence fading in GameStop, the retailer’s fate was all but sealed when hedge funds and professional money managers started shorting GameStop’s shares. This furthered the lack of faith in GameStop as large investors, pitting against the survival of the company, increased.

To demystify that a bit, shorting (or short-selling) is a risky investment tactic that declares a strong belief for a stock to decline. For a fee, the hedge fund borrows shares in the declining company. They sell these shares on the market, wait for their price to drop, and then buy them back again. These borrowed shares are then returned to the original owner and the hedge fund pockets the difference. In essence, those that are shorting will make a profit if the stock falls.

The ethics of shorting has been contested for a while, and the GameStop phenomena has put it in the limelight once again. Elon Musk, owner of SpaceX and Tesla, has outwardly expressed his dislike for short-selling and has previously faced a lawsuit from unhappy investors for market manipulation. He claimed that he was thinking of taking Tesla private, but it was revealed that there was no true substance to this, resulting in many short-sellers making huge losses.

In the case of GameStop, major investors assumed that GameStop’s days were numbered and exploited the opportunity by shorting GameStop shares. As these shares decreased in value, investors gained more.

With the aid of social media platform Reddit and amateur trading platforms such as Robinhood and Trading 212, a movement was launched to increase the market value of GameStop. The issues surrounding shorting, and specifically GameStop, had been discussed extensively within a Subreddit called wallstreetbets (colloquially known as WSB). The platform provided users with a suitable platform to communicate and coordinate their loose movement.

The result? Many “normal” people took to the market and started purchasing the stock. With a sudden burst of demand, the stock skyrocketed. The market value of GameStop surpassed $24 billion, up from $2 billion in just a matter of days. A sudden increase in the value of GME resulted in distressed Wall Street firms and professional investors. Due to the risky nature of short-selling, many of these professionals, who were seeking an easy profit, lost millions upon millions. As a result, they were forced to sell other assets, causing an immediate knock-on effect to the rest of Wall Street. On Friday, all three main US indexes fell around 2%.

Melvin Capital Management was one of the worst hit hedge funds. Recording losses of more than $2 billion, the hedge fund had to be bailed out.

GameStop is not the only benefactor of this uprising though. This year, out-of-fashion BlackBerry and cinema chain AMC Entertainment have seen their shares surge 280% and 840% respectively. With such momentum supporting the movement, some people started to turn their attention to abroad too, with some of the smaller or declining European shares similarly seeing a small boost in share value recently. London’s Pearson and Cineworld both saw small increases in their market value, though nothing compared to GameStop’s surge. Inspired by the trading war surrounding GameStop, Malaysia’s Top Glove’s shares rose 8% on Friday.

Why did people do this? Though people will largely say the movement was just for laughs and small profit, it has a deep undertone that reflects the pent-up frustrations of average people with the market. “Can’t stop, won’t stop, GameStop” were the comments of one user on Reddit, who clearly enjoyed the turmoil caused in Wall Street.

There is also a sense of vindication for normal folk who like to trade. Analyst Neil Wilson claimed that there was a “peculiar vigilante morality” among some of the traders, fighting against some sort of crime or injustice.

Investor and former hedge fund manager Mike Novogratz said that people are angered by everyday investors being left out of lucrative opportunities due to the influential power of those at the top. Despite notions of a free market and the American dream, many are fed up with being used and manipulated by a few individuals who have an omnipotent control over the market.

Novogratz said: “What it really feels like is the game is stacked against the little guy.”

The number of casual investors has increased due to the pandemic, as people have had more time. This influx of new investors was not a welcome one for professionals though. Many felt that the “less informed” amateur investments caused anomalies and unpredictable activity in the market. Robinhood has received criticism for trivialising trading to the point where it seemed like a game for many. Massachusetts state regulator William Galvin was among the critics, saying: “This isn’t investing, this is gambling. This is obviously contrived.”

Watchdogs in the US and UK supported this sentiment. With the market going berserk, regulators have warned private investors of “market abuse” among other illegal market manoeuvres.

Regulators are not the only critics though. Some ordinary people have voiced concerns about keeping defunct companies alive despite them proving to have little value. GameStop has been criticised for its inflexibility in keeping up with the market.

Fairy-tale endings are few and far between as the Wall Street investors somewhat got their own in the end. In the middle of the trading day on 28 January, Robinhood and Interactive Brokers curbed buying of shares in GameStop, among other companies, putting the brakes on the chaotic trading that had previously seen the value of GameStop rise by more than 700% in a week. The restrictions resulted in shares of GME falling by a peak of 55%. But was it too late? Had the damage already been done? Only time will tell.

Robinhood’s actions were justified by claiming that the company feared the flurry of trading would be deemed illegal action. However, they themselves have in turn been accused of market manipulation by limiting buys of certain stocks.

Everyday investors may not win the battle in the end, but they certainly won hearts and approval

Undoubtedly, many investors were furious with Robinhood’s decision, citing a double standard of rules between themselves and the Wall Street elite. The app received an astronomical number of one-star reviews, resulting in Google Play halting the “review bombing”.

Facebook followed in suit, removing a chat forum about Robinhood, but they failed to elaborate on the reasons for this decision.

American political advisor Robert Reich tweeted this when the amateur investors were accused of illegally influencing the market: “If Redditors rallying GameStop is unacceptable market manipulation, what would you call it when greedy Wall Street bankers gambled away our entire economy in 2008 and faced no consequences?”

The everyday investors may not win the battle in the end, but they certainly won hearts and approval from people across the world. Even Democrat Alexandria Ocasio-Cortez and Republican Ted Cruz found themselves agreeing on the matter, a rare feat to say the least.

Despite the restrictions that caused GME to fall, pre-market dealing overnight saw GME rise over 74% at the start of the trading day as the backlash resulted in Robinhood ultimately easing some of its restrictions. Raising over $1 billion from the frenzy, the trading platform will be able to bolster its finances with people concerned about the strain that the trading war would be having on the platform.

Democrat Senator Sherrod Brown voiced the injustices that many people felt. He claimed that “people on Wall Street only care about the rules when they’re the ones getting hurt”. It will be interesting to see how this ends. There is no doubt that this extraordinary trading war will have a lasting legacy and influence on the future of the market and investment.