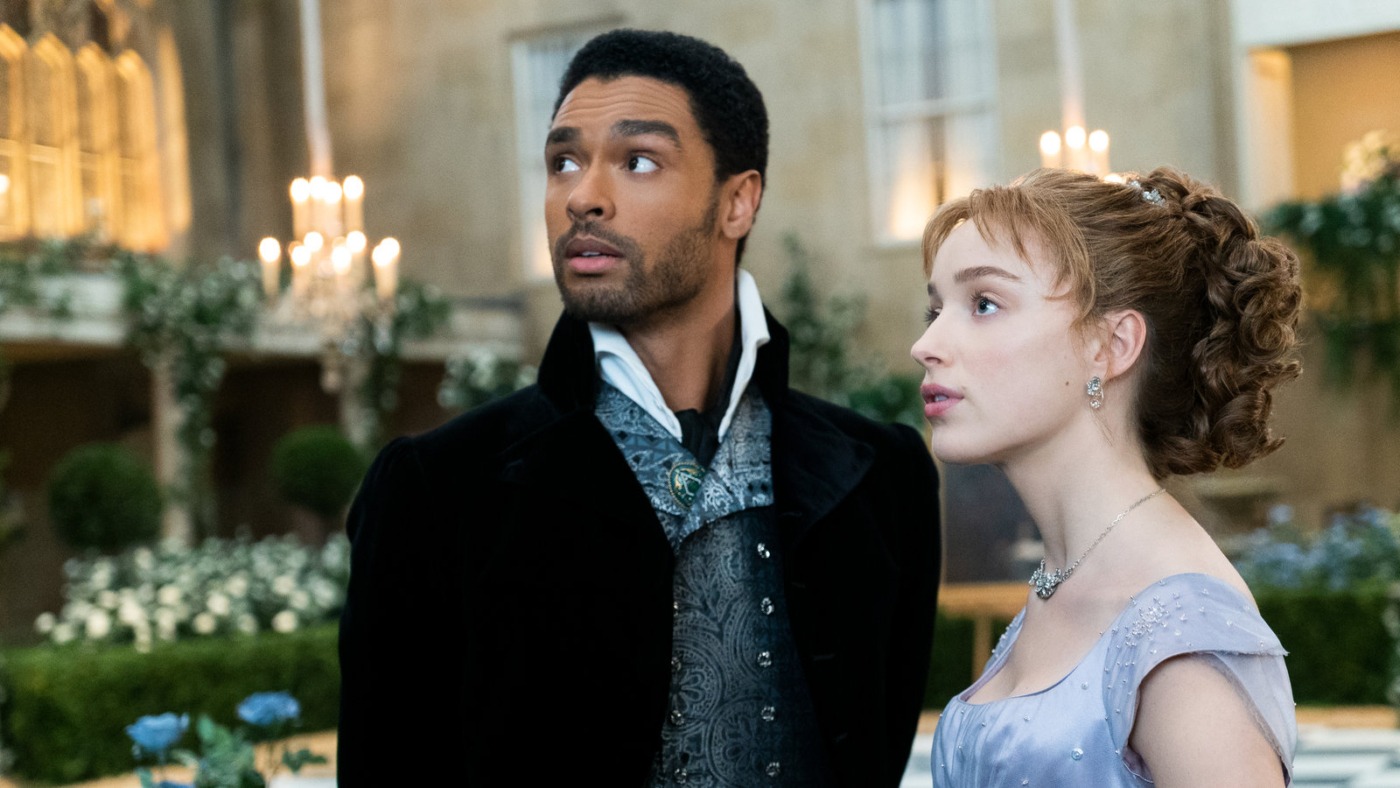 “You shouldn’t watch this with your parents”: ‘Bridgerton’ review

The 1813-set period drama, being the love child of Pride & Prejudice, Gossip Girl, and 50 Shades of Grey, is all anyone can talk about. Based on the novels of Julia Quinn and adapted by Shonda Rimes, we see young debutantes presented for approval on their looks and curtsies to determine their “value”. The degrading season of frantically finding a husband only made more difficult by Mrs Whistledown (voiced by Julie Andrews) unravelling secrets.

Something many will notice as being “inaccurate” is how Bridgerton’s casting is racially blind, placing actors in various character hierarchies. From a scandalous debutante unaccustomed to ton society who’s a “French” dressmaker, to individuals of higher ranking: the Duke (Regé-Jean Page), Lady Danbury (Adjoa Andoh), and the Queen (Golda Rosheuvel). Refreshingly, diversity is apparent without the characters’ personalities and circumstances being revolved around their race. The actual Queen Charlotte herself was of African descent and believed to be Britain’s first Black Queen. So, why not involve actors of colour as a nod to the monarch’s history, and showing how far we have come in entertainment?

Although race is not an issue or plot line in Bridgerton, sexual liberation, misogyny, and double standards certainly are

Although race is not an issue or plot line in Bridgerton, sexual liberation, misogyny, and double standards certainly are. Antony Bridgerton (Jonathan Bailey) has an overbearing compulsion to gate-keep Daphne (Phoebe Dynevor) as he “knows how this works” when his meddling begins to unravel Daphne’s flawless reputation. Antony’s poor judgements causes an onslaught of unwanted attention from Nigel Berbrooke who believes he has the right to possess Daphne, as he was promised marriage from her brother. We find that the initial presence and word of a man gains more respect than that of his assumed future bride. Berbrooke is only permanently deterred once met with a rumored scandal, since Mrs Whistledown’s scribblings can be manipulated with false information (as seen throughout), yet everyone trusts it as independent and honest media.

The marriage of pop songs with string quartets, unlike many of the relationships in Bridgerton, works seamlessly. From ‘Bad Guy’ to ‘Thank u, next’, when watching we’re immersed into a society many of us initially can’t fathom; finding the hardships, longing and pettiness relatable. If you are looking for total historical accuracy, then this is not the show for you. I find the fantasy collage of the Regency era, modernity, and scandal charming, as it’s enthralling despite the neglect of the tiny details.

Somehow, Bridgerton manages to be sexually liberating for women, yet filled with double standards – silent on sexual assault when it comes to men

Somehow, Bridgerton manages to be sexually liberating for women, yet filled with double standards – silent on sexual assault when it comes to men. You shouldn’t watch this with your parents. It seems that all the debutantes except for Marina (Ruby Barker) don’t know the matters of sex, and is reflective of a time when women weren’t told about sex to limit the chances of them partaking in it to prevent them from “ruin”. Unsurprisingly, however, we see Antony and others having no issue frequently wetting “the wick” with “lower class” women, yet when it comes to a debutante and man kissing, duels are had and marriages demanded, for no other reason than the fact that these are women of a higher class compared to an Opera singer (Sabrina Bartlett) and “Modiste” Delacroix (Kathryn Dysdale).

Female masturbation and Daphne’s bewilderment on the matter is disappointing. Her sexual revelations come from a man she barely knows rather than her mother. This lack of education is used against her as the Duke fuddles the truth on how he “can never” give her children. The drama focuses on Simon’s deceit rather than making Daphne accountable for the clear sexual assault that takes place. Upon her new understanding on how to conceive, the now Duchess ignores the Duke’s want to stop effectively robbing him of consent to produce children. This is incredibly problematic, as I fear it sets a nasty precedent on male consent, assault and rape for audiences at home as negligible.

Eloise’s investigations felt extremely rushed compared to the main plot, and when it’s revealed who Mrs. Whistledown is, it thus felt underwhelming and short-lived

It would not be a period drama without the feminist younger sibling who hates the idea of marriage “squawking for a man’s attention in some bizarre ritual”. Eloise would rather an education and spends time investigating Mrs Whistledown, who she believes is an independent woman whom she can learn from. Eloise’s investigations felt extremely rushed compared to the main plot, and when it’s revealed who Mrs Whistledown is, it thus felt underwhelming and short-lived. Daphne, though traditional, is still assertive and makes her own choices concerning men, and showing that following the expected values doesn’t make you weak.

Women are fighting against each other for male attention, resorting to pettiness and blackmailing within a world that offers little possession of authority for themselves – sadly a true representation of the period. Hence, the women appear spiteful when really they’re playing the only game that they’re able to, so their lifestyles are maintained and family expectations are fulfilled.

I am burning for Season two: for confirmation on whether Mrs Whistledown is who she’s revealed to be, or if the ending was just another clever ruse for the viewer? Bridgerton is addictive and exhilarating. If you’re looking for a show to binge during lockdown, this won’t disappoint.