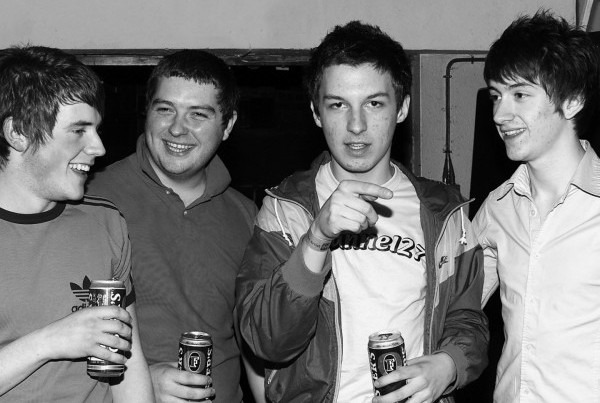 ‘Whatever People Say I Am, That’s What I’m Not’ turns 15: Arctic Monkeys’ chaotic young energy lives on

It’s been fifteen years since Arctic Monkeys released their debut Whatever People Say I Am, That’s What I’m Not. Released on 23 January 2006, Whatever People Say I Am quickly became the fastest-selling debut album in British history. In the following year, the band would win ‘Best British Band’ at the NME awards, showing they were here to stay: it gave them time to prepare for their eagerly awaited next album Favourite Worst Nightmare, and set the precedent of energy and experimentation for their legendary musical career.

Despite the members being only 19 and 20 at its release – they only started their band in school because “it looked like an interesting thing to do”– they’d already generated a reasonable fanbase. This was partly due to their EP Five Minutes with Arctic Monkeys, but mainly from fan-uploaded demos. However, it was singles ‘I Bet You Look Good On The Dancefloor’ and ‘When The Sun Goes Down’ that launched the band onto our radios, each hitting an instant number one.

The band’s classic indie-rock sound is similar to contemporaries The Killers and The Strokes, who were then championing the 2000s alt/indie resurgence. But the edge in Arctic Monkeys’ music came from frontman Alex Turner’s brilliantly constructed lyrics and unique delivery: “lyrics were an area that we were ashamed to talk about and we just wrote bollocks to start with. But I’d always write things down in secret and one day I just thought, ‘Fuck It!’” Turner told NME back in their first interview in 2005. From this epiphanous moment were born the witty puns of ‘Fake Tales’ – “And all the weekend rockstars are in the toilets/ Practising their lines” – and political critiques of the commodification of art in ‘A Certain Romance’ – “There’s only music so that there’s new ringtones”.

The unromanticised depiction of their Yorkshire hometown of Sheffield is another key feature of the album, influenced by punk poet John Cooper Clarke. Turner croons “Over there there’s broken bones” and “The point’s that there ain’t no romance around there” in the classic ‘A Certain Romance’. The band’s varied influences continue: being teens in the 2000s, they were also listening to Eminem and Outkast. This rubs off with the lyrics’ fast-delivery – particularly in ‘From The Ritz To The Rubble’ where Turner opens with a rap-like rant, his thick Northern accent giving a raw, conversational quality that will disappear in Tranquility Base Hotel & Casino.

Whatever People Say I Am has been labelled a concept album for its depiction of nightclubbing and teenage subculture. This is most recognisable in ‘I Bet You Look Good On The Dancefloor’ and ‘Dancing Shoes’ with Turner’s swooning over girls, continued throughout the record as we’re taken on a typical Sheffield teenager’s night out. Turner depicts the highs and lows of night-life (a concept now only faintly nostalgic to us in the midst of the pandemic), with late in the day excitement from the album’s opener ‘A View From The Afternoon’: “Anticipation has the habit to set you up… Tonight there’ll be some love/ Tonight there’ll be a ruckus, yeah”, also presaging what’s in store for the listener – a musical commotion of crashing drums and chaotic riffs alongside themes of love and defeat.

The concept of the nightclub in the album epitomises emotional memories of youth, from attempts at romance to dimly-lit scuffles

We go from a tetchy taxi ride in ‘Red Light Indicates Doors Are Secured’ where directions to the cab driver are narrated alongside a funky bassline, to angry bouncers in ‘From The Ritz To The Rubble’, to innocent underage drinking in the sombre ‘Riot Van’: “Have you been drinking, son?/ You don’t look old enough to me”. The concept of the nightclub in the album epitomises emotional memories of youth, from attempts at romance to dimly-lit scuffles. For a group of young lads whose lives were dominated by clubbing, girls and music, it’s only natural for these topics to dominate their songs.

So how has this album remained one we love today? In prehistoric clubbing days, ‘I Bet You Look Good On The Dancefloor’ was a permanent feature of any indie room, getting teens onto the dancefloor, rock fans or not. Aside from head-banging rhythms and catchy riffs, it’s Turner’s relatable lyrics that make us smile as we like to think we’re experiencing the same energy and anticipation – “Stop making the eyes at me/ I’ll stop making the eyes at you”. The themes of romance, unrequited love, hopeless attempts to pull, and subdued walks through the street after a night out are all too reminiscent today.

Growing up, I remember my dad would play this album, much to my mum’s dislike, who considered Arctic Monkeys merely “that angry shouting lot”. Yet the album’s depiction of youth subculture shows that in fifteen years, whilst a lot has changed, many things haven’t. “Well, oh, they might wear classic Reeboks/ Or knackered Converse/ Or tracky bottoms tucked in socks” conjures up an image of 2000’s teens, but in the same way that these fashions are still well-worn today, the songs and themes of this album remain timeless.