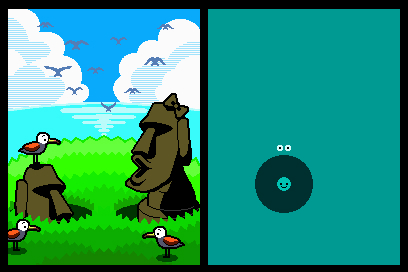 What Happened to: ‘Rhythm Paradise’?

The Mario-themed case of my pink Nintendo DS holds many games and even more memories. One game that I always took with me was Rhythm Paradise. I must have spent many a long car journey holding my DS sideways like an open book, frantically tapping away at my screen, driving my parents crazy. Sorry Mum, but it was necessary when playing this game.

Rhythm Paradise, also known as Rhythm Heaven, did exactly what it said on the tin. It featured fifty levels of different ‘Rhythm Games’, each with different wacky characters, cute creatures, and a new set of rules. Of course, the basic rule always stayed the same: keep with the rhythm. The player was ranked at the end of each performance, needing at least an “OK” to clear the level and move on. Receiving a “Superb” rating was the goal, rewarding you with a medal which could be used to unlock extra features, such as Endless games. Once a “Superb” rating had been achieved, the game gave random opportunities to go for a “Perfect” score. As you can imagine, this brought on a whole new element of frustration. An attempt at a perfect score was often followed by the slamming down of my DS after messing up the rhythm right at the end of a song.

The Rhythm Games were split into sets of ten that involved four levels, followed by a remix round that incorporated all the craziness from the previous levels. These were by far my favourite; they gave me the same vibe that I got from watching The Avengers for the first time, seeing all the different characters come together.

The combination of catchy music and the colourful art style was the source of my love of this game. To this day, my sister and I can be found randomly quoting things like “I suppose, I suppose, hey!” from the Fan Club level or “peck your beak!” from the Blue Birds level. Playing each level over and over and over to get a superb score definitely led to these songs being constantly stuck in my head.

Despite the simplicity of this game, it was often incredibly frustrating. I remember the later levels and remix levels being especially difficult. One level had the player rapidly switching between clicking on and offbeat with little notice between the change, which I always messed up. Yet this is why I would spend so long playing this game: I just had to complete a level before turning it off.

So, what happened to Rhythm Paradise?

I have not played this game since the DS version, which was the first of the series to be released on a global scale. What I did not realise is that it had a predecessor for the Wii called Beat The Beat: Rhythm Paradise (or Rhythm Heaven Fever). This was then followed by Rhythm Paradise Megamix for the 3DS in 2015. These two games followed the same premise, introducing new rhythm games with new characters, as well as incorporating some of the levels from the DS version. Honestly, I am tempted to buy the Wii version and see if it matches up to my memory of the DS edition.

There have been a lot of discussions floating around concerning the future of the Rhythm Paradise series. Back in April, the creator of the series Mitsuo ‘Tsunko’ Terada tweeted to fans, asking them to raise their voices and show support for bringing the series to the Switch. Nintendo has not since announced any plans to bring a Switch version of the game to life. However, given its previous success and the demand for a new game on social media, I think that the future of Rhythm Paradise could be bright.

If the game does find itself on the Switch, I can see myself buying a copy and marking it against the DS version. For now, however, I will dig out my old DS and head back to the nostalgic fun of Rhythm Paradise, a small form of escapism in the face of Tier 4 restrictions.