One of the icons of the premier league era for football, Arsene Wenger, has recently released his autobiography, Wenger: My Life and Lessons in Red & White, detailing his early life and his various jobs in management. The book itself goes into detail on all his jobs, with almost half the book dedicated to the various periods of his Arsenal job. The question that a review of this book should ask are: is it insightful and entertaining, as all autobiographies should be?

The answer to the first question is yes, as any Arsenal fan or football fan in general will definitely find this worth a read. It is a great insight into a man filled with real passion for his sport, someone who was a true innovator of the English game. Wenger’s account of his work really paints him as someone who has a genuine love for scientific analysis of football, through his discussions of nutritional, statistical and psychological aspects of the game.

Not just this, but it also showcases his passion for what he believes football should be about – free following passing moves, technical ability and entertaining fans of football with expert attacking plays. No matter how it ended, his accounts show him using techniques way before his time, including statistical analysis which made Arsenal world-leaders in recruitments according to industry professionals, and nutrition which added years to his initial defensive back line at Arsenal.

Of course, most fans will be wanting the first-hand accounts from Wenger’s time at Arsenal

I particularly enjoyed the chapters regarding his time managing in Japan at Nagoya, as well as the chapters on managing Arsenal through their invincible season as they won the league without losing a game, and through the transition to a new stadium. These really deliver more insights about Wenger and about management in general than most readers would know going into the book.

What was particularly interesting about Wenger’s account of his time at Nagoya is the time he takes to explain how Japanese traditions and cultures managed to influence the way that the Japanese both watch and play football. It also provides insightful lessons for managing a team in a foreign country, as Wenger recounts how learning about Japanese customs helped him to coach a team who had done nothing but lose. He managed to turn them into a trophy-winning side within 12 months, going on a winning run that sent them to second in the league.

Of course, most fans will be wanting the first-hand accounts from Wenger’s time at Arsenal. While initial chapters show what inspired Wenger’s passion for football and ideas about how it should be played, as well as how to improve coaching methods, his stories from leading Arsenal offer a great journey of emotion and made me rethink how we should assess football managers.

I was impressed at how blunt Wenger was about transfers, wins, losses and all the other aspects of managing a football club. I was curious to see whether he would offer excuses regarding how injuries arguably stopped him from winning the Premier League title in the 07/08 and 15/16 season. However, this is not the case.

Wenger offers parables about his self-confidence and self-doubt in equal regard. His stories about first joining Arsenal as manager and the push-back against a foreign manager being appointed for the job left me astounded. I was shocked at both the lack of acceptance shown from English football fans at the idea of a foreigner managing a football team, as well as Wenger’s ability to overcome that prejudice and succeed by winning the title in his second season.

At moments like this throughout the book, Wenger offers his personal insight into bigger issues surrounding football, such as what it can do for societal issues and how the game has evolved. I loved reading these insights as someone who has been alive for fewer years than Wenger has been in management. Wenger also shows a real humanity through his descriptions of his joys of winning and his sorrows of losing.

With these tangents, he manages to achieve what any football autobiography should do. Wenger manages to both humanise these sporting icons and inspire us in the way we can relate to them. He also showcases football as the microcosm of society that it is; with its ability to impact social issues in a diverse number of ways. In this regard, the book offers the reader a different way of viewing football rather than just viewing it in a vacuum, which many of us are guilty of doing.

For anyone who loves a good autobiography from an influential man, with stories and insights on every page, then this is also the book for you. Wenger’s book contains lessons in attitude and management that I hope to carry with me once I enter the professional world – and it is also thoroughly entertaining. A must-buy for lovers of football and autobiographies alike. 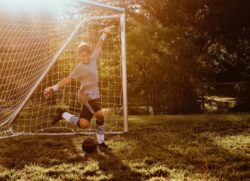