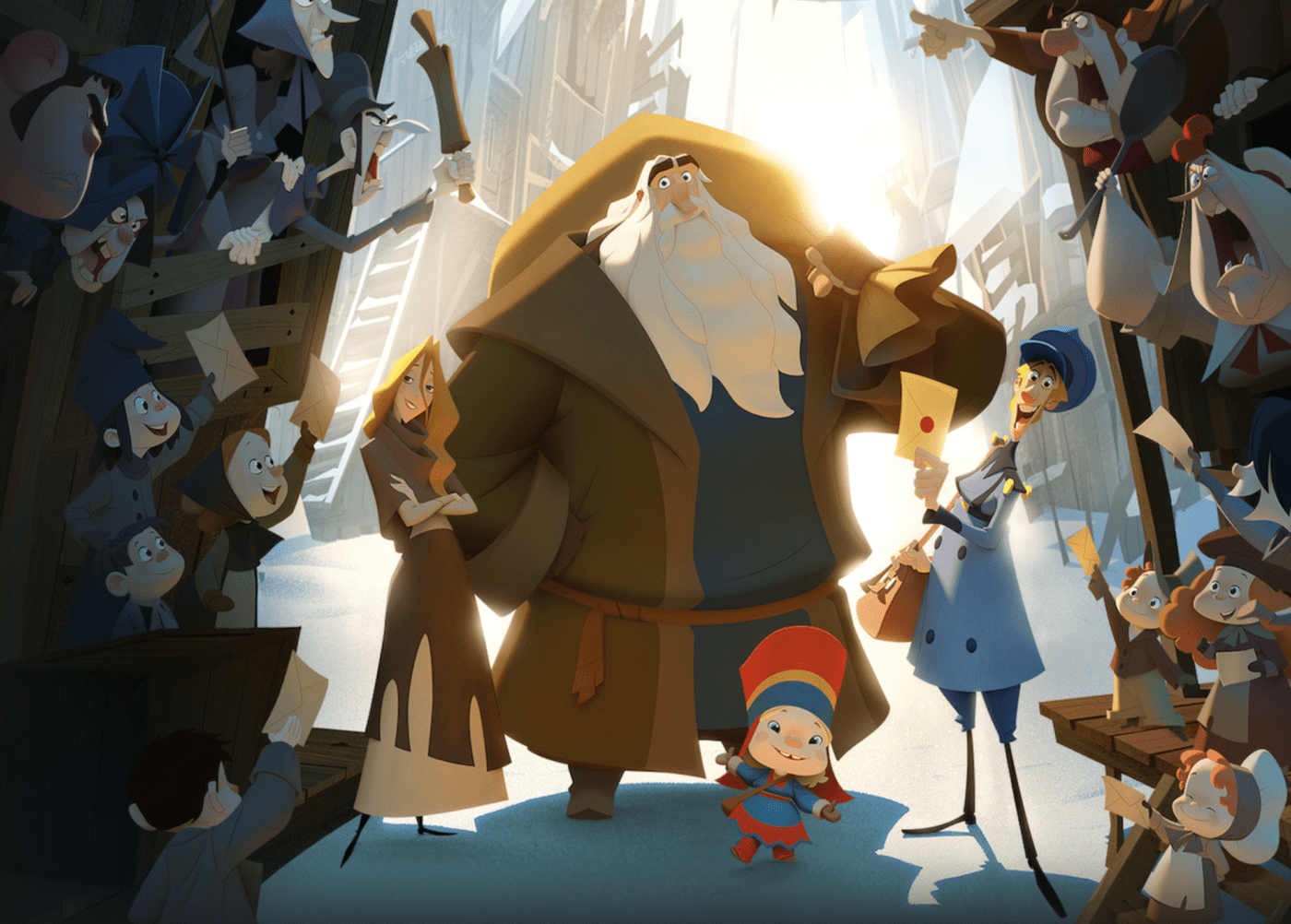 One year removed from the release of Klaus, it is interesting to see the impact, or surprising lack thereof, that the film has had on the festive season. When I first watched this film, I was convinced that this would be regarded as a modern Christmas classic. It is a fresh idea that was clearly the work of a passionate creative team, earning a BAFTA and an Oscar nomination for best animated feature last year. It is leagues ahead of Illumination’s recent Grinch movie, yet this movie is undoubtedly more prevalent within the public eye. I do not think that The Grinch is all that bad by any means but, as a recent holiday tentpole animation, it seems a logical comparison.

Every frame conveys the tireless work of countless animators, and this effort does not go unnoticed

Klaus, however, does not feel like a modern animation movie. It is animated in traditional 2D, akin to that of Disney films of old. The film’s director, Sergio Pablos, claimed that one of his major targets throughout the development process was to show how far this technique has come in recent times. With this in mind, the use of gorgeous modern lighting techniques to convey the depth we are accustomed to from modern 3D animation was a work of genius. Every frame conveys the tireless work of countless animators, and this effort does not go unnoticed.

I recognise that the value of a film is more than how it looks, but the animation is so staggering that I could not accurately review this film without giving it the credit that it deserves. Nonetheless, this animation would be little consolation for a lacklustre story. It depicts the origin story of Santa Claus from the perspective of a postman who is sent to establish a local post office Smeerensburg. This is a perceived to be a lost cause, but when Jesper seizes an opportunity to facilitate the creation of an urban legend, his life turns upside down.

It seems a simple premise, but I commend the major narrative risk that it takes. What is this? Well, it takes the idea of a Santa Claus origin story and changes the lens through which it is told. The protagonist is not Klaus as the title suggests, but a spoilt postman by the name of Jesper. It is the blossoming friendship of these unlikely protagonists that cements the strong narrative background, and not solely the untold story of Santa Claus. By the end, you are left rooting for both of them. Making the audience care about a protagonist other than Santa Claus in a movie where he is the titular character is no easy feat, and I believe they pull it off here magnificently.

In fact, every central character has a defined arc within the movie. Jesper believably grows from a spoilt, sheltered man-child to an endearing, compassionate friend over the course of the movie, learning the importance of surrounding yourself with people that you care about. His decision to not return home at the beginning of the third act was a wonderfully mature choice that shows that Jesper was no longer willing to live in the shadow of his father, leaving him free to craft his own legacy. Alva, who ultimately becomes Jesper’s wife, learns to rediscover her love for teaching as the local children begin to show their passion for learning. This leads to her reforming the school out of her own savings and staying on the Island to teach.

It is generally thought that a successful character arc is defined by a goal, a lie and a truth.  Klaus wants to make toys but wrongfully believes that he must confine himself to his cottage after the premature death of his wife. As the story progresses he slowly begins to see the truth that she would want him to bring joy to the world as he brought joy to her life. His mantra of ‘A true act of goodwill always sparks another’ truly drives the emotional core of the film, and only becomes more apparent as the film progresses, further demonstrating his development.

The voice acting here is stellar across the board. Jason Schwartzman as protagonist Jesper brings frenetic energy to the character, making him an endearing and entertaining focal character, while the deadpan wit of Rashida Jones as Alva provides an effective balance to his overly excitable demeanour. She is strong, assured, and calculated in every action.

For me, however, the standout is JK Simmons, who delivers his trademark gravitas with aplomb as the central Klaus. His performance exuberates a whimsical stoicism that gives the character the mythical quality that he deserves. He is larger than life and intimidating in early scenes, but as his character grows, he begins to project a wonderful internal warmth. Yet such a change does not feel like a betrayal of his character, instead his gravitas only acts as a conduit to his newfound kindness.

The town of Smeerensburg is a character in and of itself. I recognise that this is a cliché, but it’s true! In fact, Smeerensburg is actually the main antagonist of the movie. Its eerie atmosphere and archaic values ultimately create the proverbial tide that the protagonists must constantly fight against. It is engulfed in a constant civil war between the Krum family and Ellingboe clan stemming from nothing but a love of fighting. Jesper and Klaus must overcome the destructive traditions engrained into the very town itself to usher in an era of prosperity. In characterising its antagonists as such, the film puts itself in danger of narrative simplicity.

These seemingly insignificant scenes are meaningful and make even the smallest side characters feel human, creating a tangible society that is anything but two dimensional

However, the film even makes a point of showing that the townsfolk are not inherently bad people but misguided and led astray by a system that breeds irrational violence. We see it through minimal interactions, but these seemingly insignificant scenes are meaningful and make even the smallest side characters feel human, creating a tangible society that is anything but two dimensional.

However, the same cannot be said for the two main antagonists of the film. The leaders of the two clans are as deliciously evil as they come but feel like they belong in a completely different movie. They are unapologetically wicked but have no motivation other than the fact that their clans have been fighting for generations. The explanation for this everlasting war is unclear but would go a long way in justifying their motivations. Whether this is a commentary on stubbornness or not is up for debate, but there is no question that these two characters are the least interesting in the movie.

This is just a minor point though. The film is loaded with heart and earnestness, with a number of wonderfully hopeful scenes that look to warm even the coldest of hearts. A number of these revolve around a small girl named Margú. I will not say much about her character, but what I will say is that Margú walked so that Baby Yoda (now going by the name of Grogu) could steal our hearts in The Mandalorian. These fantastic scenes are complemented by a marvellous score from composer Alfonso González Aguilar, who really shines at conveying an otherworldly wonder within each piece. This is especially apparent in a magnificent scene involving the first toy delivery, which acts as a defining moment of character growth for Klaus.

If nothing else, Klaus is the festive film that we need this year. Its relentless offering of hope in the face of despair gives us all pause for thought in a year in which the search for hope may have been a little harder than in previous years. If anything, I would highly recommend that you watch this movie if you need a boost over the holiday period. It is bursting at the seams with passion, heart and has a wonderfully uplifting energy that will leave you feeling ready to face the festive season.