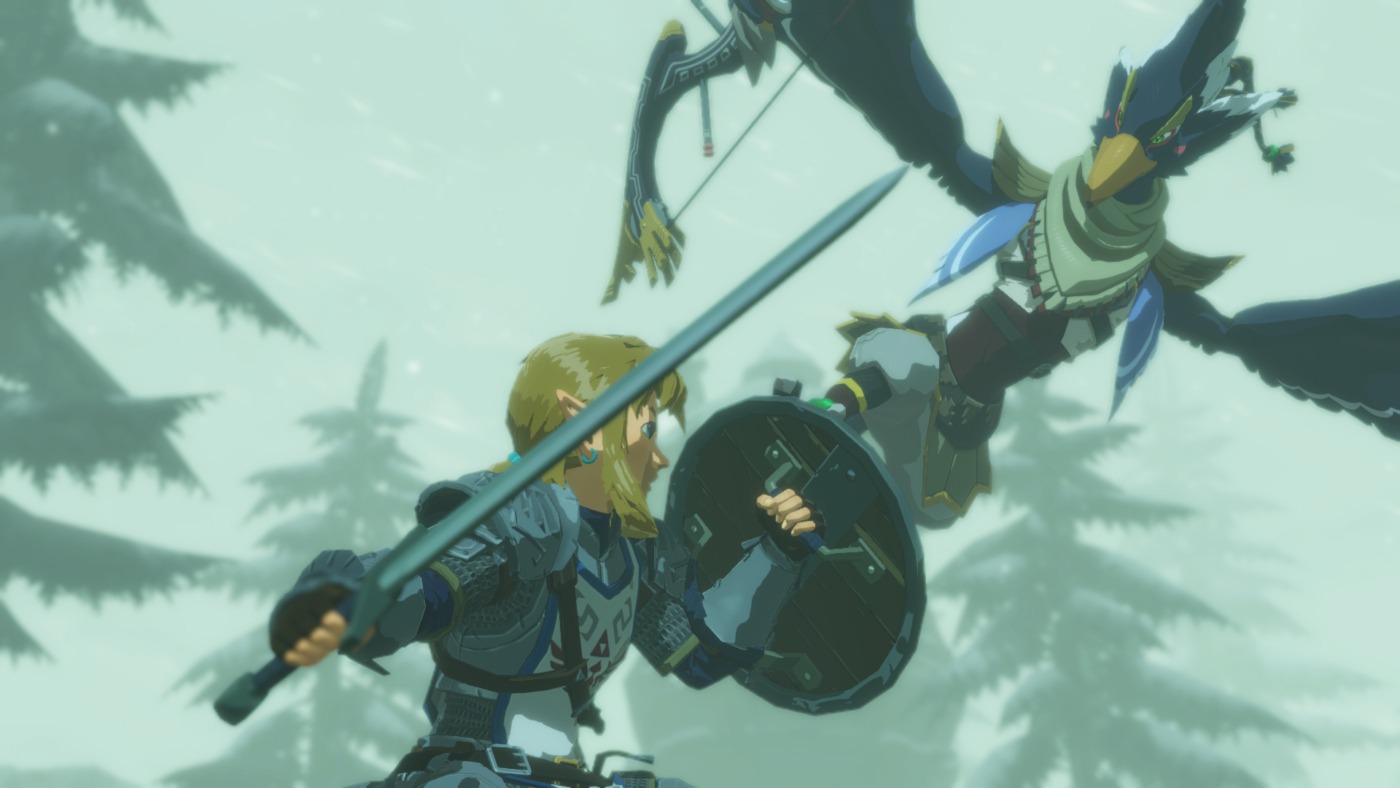 A game set in the same universe as The Legend of Zelda: Breath of the Wild was always going to generate a lot of buzz and excitement. Thankfully, in the case of Hyrule Warriors: Age of Calamity (developed by Koei Tecmo’s division Omega Force, with the help of Nintendo’s Zelda team) the enthusiasm ended up being more than justified. AOC is a brilliant game and a worthy addition to the BOTW world.

The events in the game take place roughly 100 years before those depicted in BOTW. As the player, you follow various characters from the latter game (although there are some new entries) as they train and fight against Calamity Ganon’s minion, and prepare for the arrival of the Calamity itself.

Although players might be familiar with the story, Koei Tecmo’s virtue lies in their ability to make it fresh and exciting, regardless of how much players might know about the events and their outcomes (as shown in BOTW). Situations mentioned only en passant in the 2017 game are carefully developed, each receiving considerable attention (the battles at the Akkala Citadel and at Fort Hateno are two standouts for me), allowing the player to fully understand just what happened 100 years prior to the events of  BOTW.

AOC allows the player to experience the battles first-hand, and I found them to be far more exciting and interesting than how they were depicted and mentioned in BOTW. The struggle that took place is no longer something I just heard being mentioned; I got to fully experience it, by being thrown straight into the battles and the ensuing chaos.

Importantly, battles are not all that happens in this game, despite what the title might suggest, and what I might have thought (in my defence, this was my first Musou game, so I fully went into it expecting a simple hack-and-slash type of experience). Instead, I found the story far more compelling; you get to experience how the Champions came to be, but also follow the evolution of characters such as Zelda and Link.

Zelda’s evolution as a character was a joy to experience

In general, for most characters, the path to greatness was not immediate, and you are able – as the player – to experience their development and progress, both as a person and a warrior. Zelda’s growth in these respects is particularly poignant, and it’s undeniable that she is the real star of the game, progressing from an insecure princess to a confident ruler, unafraid to guide her people to war against the Calamity, aware that both victory and demise are possible, but unwilling to give up without a fight. Her evolution as a character was a joy to experience. She is by far the most relatable Zelda I have come across in the series, and definitely my favourite.

Generally, then, AOC is far richer content-wise than the 2017 game. BOTW had been lacking in this respect, but AOC amply made up for this by providing an abundance of content.

As a consequence of the above, the characters in the game no longer feel like distant and shallow figures, unable to be understood and related to, an issue I found to be quite glaring in BOTW, especially in relation to the Champions, who I felt to not have been developed enough. AOC, again, makes up for this: the characters (especially the Champions!) are extremely well developed, and feel far more realistic and life-like, especially when they interact with one another, serving to mostly increase my appreciation towards them (except for Revali who, I’m sorry to say, remains insufferable as ever). Every battle provides the player with multiple insights about the various characters – both before and during them. The secondary quests and missions only serve to further reinforce this (and there are plenty of them to do!).

Just as I had loved the visuals from BOTW, I deeply appreciated those in AOC

There’s not much I can say about the gameplay. It’s as hack-and-slash as it gets, but at the same time, I appreciated how some elements of it were intelligently interwoven with elements from BOTW. The prime aim of the game is to battle hordes of enemies, commanding your allies strategically to maximise your chances of accomplishing this, with the aim of ultimately fulfilling the predefined objectives set by the game (e.g. capturing outposts).

You can choose from a wide roster of characters, each with his own unique sets of moves and weapons (both modelled on those present in BOTW and, in the case of the weapons, thankfully, not breakable). Additionally, characters have access to features from the Sheikah Slate (as seen in BOTW), and to an array of Wizzrobe wands – again, a clear reference to BOTW. Enemies are varied, although taken from the BOTW world, and require different strategies to be brought down, or even different characters.

I really enjoyed trying out the various characters – although Impa, Link and Zelda were ultimately my favourites – each with their unique sets of moves. However, it’s undeniable that I had loads of fun playing as the four Champions too, and I gained a greater appreciation for them, finally understanding just why they had been chosen to pilot the Divine Beasts. The battles never felt monotonous, but rather brought me every time a surge of excitement, and it was difficult to pace and stop myself from finishing the entire game in one sitting.

Just as I had loved the visuals from BOTW, I deeply appreciated those in AOC. By far, the incorporation of the same art-style from the 2017 game, with its cel-shaded visuals, is the clearest indication that AOC is meant to be considered as part of the same world as BOTW. The locations depicted (similar in everything but their conditions to those present in the 2017 game) only serve to reinforce this and are definitely another strength of the game.

There are heavy frame drops on multiple occasions, making the game painful to play

Despite the genre, the temptation to explore is just as strong as it was in BOTW. It might be hampered by the inability to proceed further than the battlefield, but that does not mean that the exploration stops there. Each battle provided me with a new setting, which I always found to be rich in details, and coherent with what was presented in the 2017 game, and – inevitably – with the irresistible urge to explore. This led me frequently to forget about the main quests, and to take my time exploring the setting, routinely spending 50 and more minutes per battle, when they would normally take no more than half an hour, just because I felt the need to explore the various settlements and locations.

Hyrule 100 years before the calamity is truly a vision to behold, and seeing how things were before made it easier to understand the sheer destruction and impact on Hyrule brought about by Calamity Ganon in BOTW. There are many standouts for me in this respect, but the area surrounding the Temple of Time is definitely the first to come to my mind. I could hardly recognise the area in AOC – it was so different from its depiction in BOTW.

Importantly, the team behind the game actively encourages exploration, by rewarding you with Korok seeds in unsuspecting places, although there are not nearly as many to discover as in BOTW (thankfully). For anyone who has played the latter, this game is guaranteed to be a treat, but new players too can take pleasure in the environments, which have nothing to envy to bigger games.

As for the music, it is stunning. I could go on for hours on end about how compelling it is, perfectly expressing the mood of the various battles, but it would make this review far longer than it already is. Suffice to say that it was the perfect complement to the game and that it could not have been better. The tracks from BOTW are beautifully remixed, and go hand-in-hand with the events taking place in the game.

Despite all its virtues, I found issues with the game – as much as I wanted to ignore them, became glaring at times. I did not find problems with the story – although I did notice some minor plot holes. These are likely to be explained in the future when the inevitable DLC gets released (one only has to look at the sheer amount of content that was released for Hyrule Warriors: Definitive Edition post-release).

Technical issues were the main problem. There are heavy frame drops on multiple occasions, making the game painful to play, and serving to withdraw the player from the feeling of immersion they might have been feeling up to then. The issue is particularly persistent in light of the multiple times that the action becomes frenetic – the enemies and visual effects pile up, making the framerate drop – a far more annoying problem than in Breath of the Wild.

However, I found the biggest problem by far to be the camera, which becomes annoying and difficult to manage in some cases, especially in small environments. I frequently found it got stuck in these situations, and it was unable to show me all the enemies in the room, forcing me to either use high-powered moves to quickly clear the area, or to back out into a bigger room to face them more easily. Ultimately, it also impacted my ability to use some characters, leading me to discard them.

Regardless of the above, I ultimately found the game to be a true gem, and far from a cash-grab. It is evident that the Zelda team had been mulling around with the idea of doing this game for some time, and the care that has gone into it highlights Koei Tecmo’s desire to make the best game possible. It’s a spectacular experience and strongly recommended to anyone wanting to learn more about the pre-BOTW events, or to someone wanting to experience a blissful hack-and-slash game.