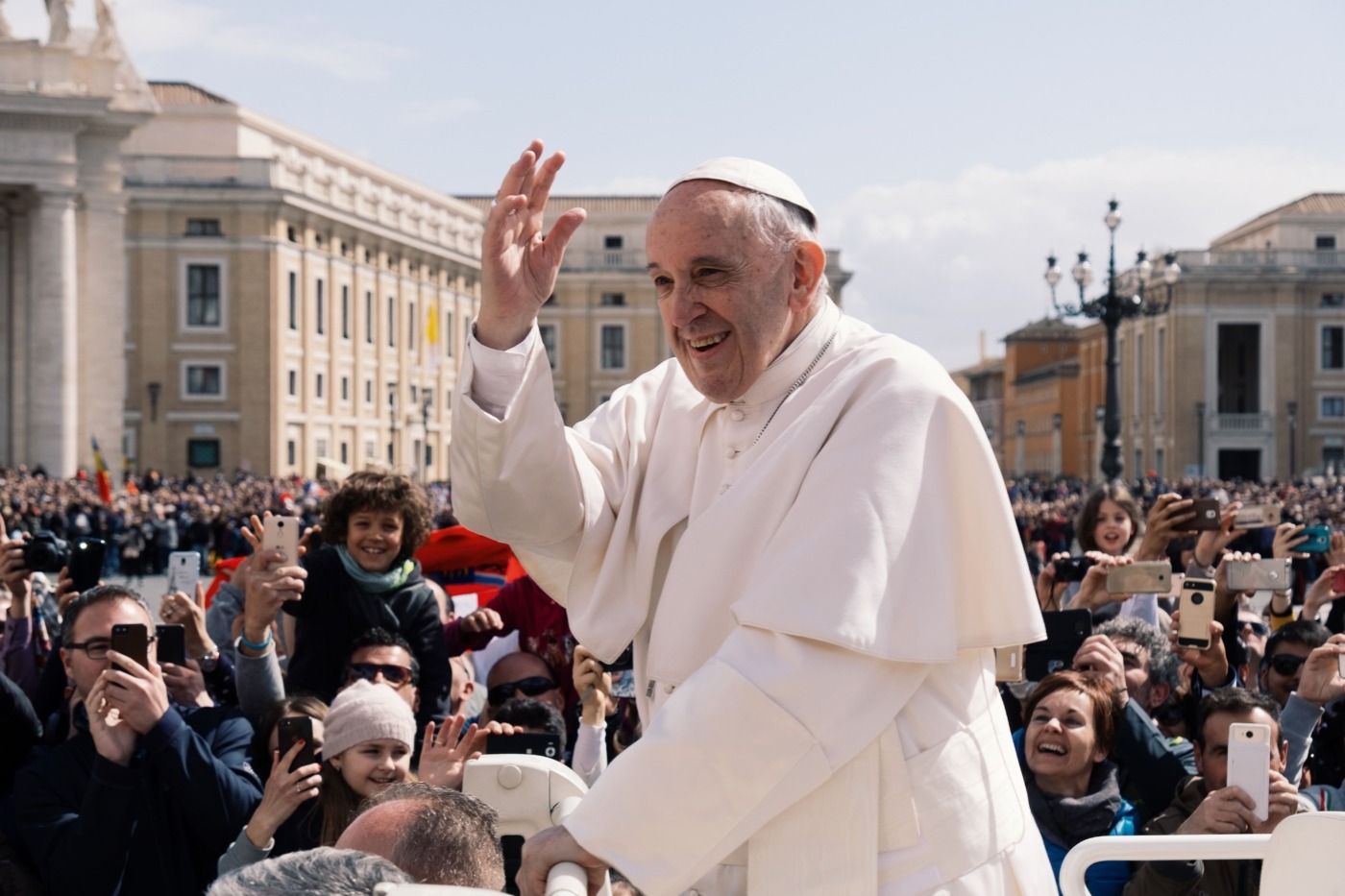 Director Evgeny Afineevsky’s latest film, ‘Francesco’, is about Pope Francis. It premiered at the Rome film festival in October 2020 and included an interview with the bishop of Rome himself. At some point during this interview, the pope said something extraordinary. Finally, after all these years, the Catholic Church would be accepting same-sex marriage. This was completely unexpected. People all over social media were shocked. Surely, this would mark the start of a new epoch in Catholicism.

Well, no. He hadn’t said that. According to The Independent, the comments were made in 2019 during an untelevised interview segment with a Mexican broadcaster and did not refer to same-sex marriage. It looks as if the pope was saying he was fine with states providing civil unions, and defended the right to a family, but that was all. The Vatican have claimed Francis was specifically telling parents of LGBTQ+ children not to treat them harshly, so there wasn’t even a defence of same-sex couples adopting either.

For LGBTQ+ Catholics, this appeared to be a sign that their Pope truly supported them. For conservative Catholics, it was proof that the Pope is dangerously revolutionary, and that they risk losing followers to more right wing religious groups

So why were so many people convinced Pope Francis had changed his mind? It is possible people simply misunderstood what he was trying to say and thought same-sex marriages were synonymous with civil unions. Once the interview had been translated and copied enough times it was inevitable people would begin to make this mistake. Alternatively, even though the story wasn’t true, it provokes strong feelings. For LGBTQ+ Catholics, this appeared to be a sign that their pope truly supported them. For conservative Catholics, it was proof that the Pope is dangerously revolutionary, and that they risk losing followers to more right wing religious groups. It didn’t particularly matter that the pope hadn’t said anything new, because it still remains one of the most controversial political questions within Catholicism. But perhaps the most interesting idea is that since Francis took over in 2013, the idea of a pope supporting same-sex marriage is, whilst untrue, not quite as implausible as it once was.

Compared to his predecessors, Francis is progressive. The previous pontiff for example, Pope Benedict XVI, argued against even celibate gay men joining the priesthood. By contrast, Francis has claimed the Church should apologise to gay people for the discrimination they have faced, has argued against judging gay Catholics and has supported civil unions since his time as Archbishop of Buenos Aires. That seems remarkably liberal when compared to say, Bishop Tobin of Providence, Rhode Island, who has argued that same-sex unions are “objectively immoral”.

Considering how different Pope Francis is to not only those who came before him but to those around him presently, the idea that he one day might support same-sex marriage is understandable. A poll in the United States revealed that most Catholics view him favourably, and think that he has worked at least somewhat to change the Church’s position on homosexuality, and indeed the majority think he has changed the Church for the better. However, there is a growing share of US Catholics, particularly those who identify themselves as part of or leaning towards the Republican Party, who believe he is too liberal. But is this really the full story? One could paint Francis as a popular liberal figure who’s bringing in sweeping changes to the annoyance of more conservative Catholics, but the truth is far more complicated than that.

The official position of the Catholic Church remains that homosexuality is not sinful, but that homosexual acts are. The Church argues these are “intrinsically disordered”. Francis has not changed this position. As Paul Elie put so succinctly in The New Yorker, “Francis, like his predecessors, made a distinction between gay people (good) and the way that they express passion and love (not good)”. Sexually active gay and bisexual people understandably might take offence at the idea that while they deserve respect and are owed an apology, part of their relationships are still being judged. Of course, sex and romance are not the same, but for many sex is an expression of romantic feeling. To be told this is wrong means the Catholic Church is maybe not as liberal as its LGBTQ+ members would like, nor as its more conservative members fear. Likewise, LGBTQ+ people might be doubly insulted as whilst their consensual relationships are constantly up for debate, the Church has a shameful history of covering up sexual abuse towards its members, including children.

Returning to marriage, in February 2015, Slovakia held a referendum that would, if passed, have banned same-sex marriage, though it was not recognised domestically anyway. It also would have prohibited adoption by same-sex couples. When visited by pilgrims from Slovakia, Francis commented “I wish to express my appreciation to the entire Slovak church, encouraging everyone to continue their efforts in defence of the family, the vital cell of society”. In 2014 he explicitly stated in an interview that marriage is “between a man and a woman”. Whilst the pope might be open to civil unions by states, he is clearly no supporter of marriage. He might have told a gay man in 2018 that “God made you like this”, but he remains unwilling to allow the same man to marry someone he loves. In fact, just before his native Argentina granted marriage rights in 2010 the then-Cardinal Jorge Mario Bergoglio claimed supporters of the new law were inspired by Satan.

Despite some inclusive language, Francis is still running a church that is not truly accepting of transgender and gender non-conforming people

On transgender issues, the pope seems to be taking a similar stance to his one on homosexuality. Although he has argued against abandoning trans Catholics, and perhaps surprisingly used the pronoun ‘he’ when describing a trans man, he has also argued against “gender theory, that does not recognize the order of creation” and compared it to “nuclear arms”. Like homosexuality, he argued that a person could have “tendencies” but argued spreading awareness in schools could be “ideological colonization” or “indoctrination”. The pope appears concerned that discussion of transgender issues could be used in a war on marriage. Despite some inclusive language, Francis is still running a church that is not truly accepting of transgender and gender non-conforming people. He might be more liberal than one might expect, but he is hardly a great ally either. This has frustrated many, such as Rev. Rodney McKenzie, Jr. of the National LGBTQ Task Force, who said such a position would “reject and dehumanize” rather than “welcome and affirm” trans people.

There is also the question of how much the Catholic Church is changing because of Francis, and how much it is changing to survive. Several Christian denominations already allow same-sex marriage, so the Catholic Church is hardly a trailblazer. Likewise, of the American Catholics mentioned earlier, 61% support same-sex marriage. It’s easy to say Francis is a liberal pope when compared to some of his bishops but compared to his followers in the USA he is more conservative. In Britain, a 2015 study by YouGov discovered that religious Catholics support gay marriage by 50% to 40%, unlike British religious Protestants who opposed it by 47% to 45%. A study in 2013 also discovered that more Catholics in Britain between the ages of 18 and 44 thought same-sex marriage was right than wrong. Additionally, in several countries across the world, fewer and fewer people are identifying as Catholic. In Argentina, despite remaining a majority of the population, the proportion of the population that identified as Catholic dropped by over 13% since 2008. Noticeable drops were also recorded in Italy, Switzerland, and the United States. Is Francis’ use of inclusive language an attempt to encourage younger, more tolerant Catholics to stay, whilst not changing Church positions in a way that would upset senior religious figures? That is not to say the pope is being insincere, as he has supported civil unions since before his time as pope. However, if figures around the world continue to drop, is it possible that Catholic Church positions could change its positions to seem more appealing to younger Christians? It seems only time may tell.

Pope Francis is an unusual figure. He has angered more conservative Catholics with some of his words, yet his positions on LGBTQ+ issues are not so dissimilar from that of his predecessors. He is more tolerant than many clerics, and yet less so than most British or American Catholics. He is also a man with tremendous power and influence. Take for instance the creation of anti-LGBT zones in Poland, a country that is overwhelming Roman Catholic and where lawmakers will openly say their values are shaped by the Church.

The Church’s positions have directly led to LGBTQ+ people feeling fearful. The pope’s views, and the Church’s positions, matter not just to Catholics but to people of other faiths and non-believers too.  When the pope speaks, the world listens. Even the suggestion that Francis is supportive of same-sex marriage is enough to get people’s attention. As for what the future holds, that remains to be seen. A more LGBTQ+ friendly Catholic Church might happen one day, but for all he has said it is unlikely to happen under Pope Francis.