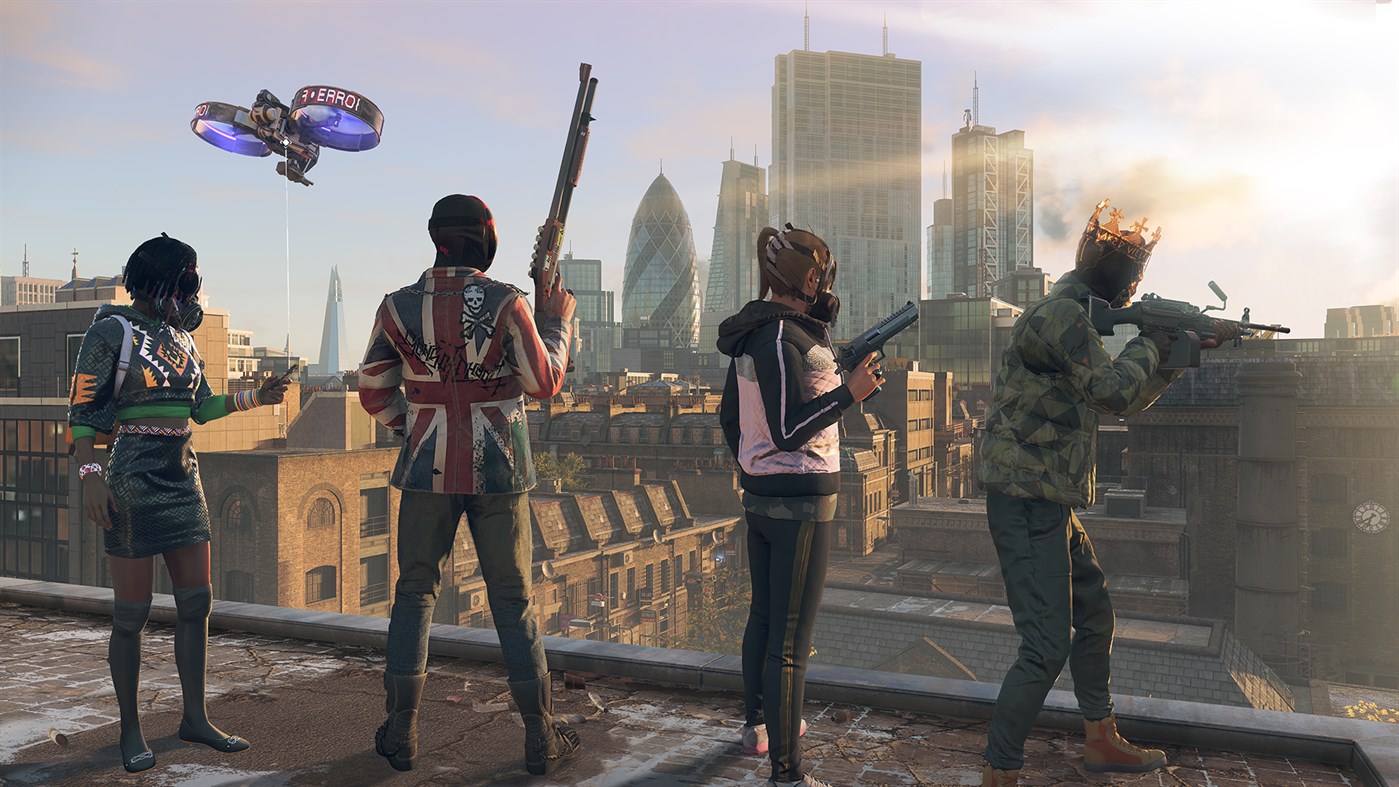 When I used to think of the most popular present-day open-world games, I was always perplexed by the lack of games set in the United Kingdom. Without sounding like a Britain First voter, there’s plenty this country has to offer for a video game setting, through geography, culture, history, and politics.

Then came 2019. Pokemon Sword and Shield was released, offering a semi-open world (depending on how you perceive the linear nature of Pokemon’s eighth generation titles) based on the United Kingdom. Among its many flaws, it failed to offer me a truly British feeling in its setting and presentation – a problem many games that attempt to capture the United Kingdom also face.

Watch Dogs: Legion, the third instalment in Ubisoft’s Watch Dogs series, manages to depict aspects of the UK – mainly London – surprisingly well for a game primarily developed by Ubisoft Toronto, although cor blimey, a few aspects do take the biscuit.

Watch Dogs: Legion takes place in a futuristic London. Following a terrorist attack on the Houses of Parliament and other landmarks around the city, the hacktivist group DedSec is blamed and subsequently desecrated by Albion – a private militia put in charge of protecting London by the government. With DedSec effectively shut down, your task is to reform and recruit new members to the organisation alongside DedSec’s sarcastic AI guide, Bagley, to expose Albion and Zero Day – the real terrorist group behind the bombings.

In terms of how this plays out, Legion’s story is pretty safe, offering little surprises or deviation from your classic Ubisoft storyline. Certain subplots such as the Skye Larsen missions have more substance to their narrative, and Clan Kelley’s twisted slave auctions are good enough incentives for you to continue onwards, but there’s not much else that really surprised me throughout the storyline.

In what is an anarchist, critical storyline, Ubisoft plays it safe, depoliticising the game by blaming all the issues on Albion and London gang Clan Kelley, rather than the government, who are seen more as innocent bystanders who do not know Albion’s true intentions, which was a missed opportunity.

The city is bustling with life, depicting a resilient London divided by Albion’s authoritarian rule

While I’m a proud Northerner who was confused by all the talk of Zone 1 and the Watford Gap when I first came to Warwick (side note: stop saying you’re from London when you live in Surrey, it’s embarrassing), I’d like to think I still know a decent amount about our capital. Or at least enough to recognise areas of the city when driving through Watch Dogs Legion’s futuristic London.

Ubisoft managed to map out countless points of interests in London, ranging from the more recognisable Houses of Parliament to the US Embassy. The location of these landmarks are pretty accurate, and even though Legion’s London isn’t a 1:1 version of London like in Microsoft Flight Simulator, you could still navigate the city using your pre-existing knowledge. The city is bustling with life, depicting a resilient London divided by Albion’s authoritarian rule, but fighting back.

It’s the beauty of finding these locations that made the setting so memorable. For example, I had just escaped a shootout with Albion and found myself in Westminster. When I came to my bearings, I looked around and said to my flatmate, “Look, that’s the BBC Broadcasting House!” While obviously changed to avoid litigation from the BBC, GBB’s building had all the markings of Broadcast House: the atrium where the One Show all-too-often finds itself holding events, the infamous front where the BBC projects the election results – it was all there.

Despite its setting, Watch Dogs: Legion’s strength ultimately comes from its cast – the population of London. Every single NPC you find within the city can be recruited to DedSec as a playable character, offering different weapons, skill sets, and perks – depending on their job, personality, and history.

My issue with the characters comes from the voice acting. A number of the accents are cringe-inducing, over-exaggerated, and borderline stereotypical. I began refusing to recruit players with certain accents as I neared the end of my playthrough, which was quite difficult because of the small pool of dialects Watch Dogs: Legion has. Oh, and someone really needs to tell Ubisoft that not everyone in London uses the word “bloody” in every single sentence.

I would highly recommend turning on the permadeath mode

This collective protagonist idea, in which no single individual is bigger than DedSec’s cause, is enhanced by the new Permadeath feature introduced by Ubisoft, which I would highly recommend turning on. No longer is your lead fighter this invincible, gung-ho individual who can respawn, learn every ability, and has no flaws.

I’ve seen many reviewers dismiss the collective nature of Watch Dogs’ protagonist, claiming it takes away the stakes as you no longer feel connected to the character, as you did with Marcus in Watch Dogs 2. I disagree. We’ve had enough generic open-world games that focus on a single, one-dimensional character in this console generation, and so it’s refreshing to see Ubisoft, of all companies, not toe the line.

Of course, this does come at the expense of some character development, but I still felt that connection to my team of DedSec operatives. Each NPC still has their own motivations, personality and backstory, meaning I was still invested in some of the characters, especially when I knew they could die permanently in-game.

So let’s talk about permadeath. Watch Dogs: Legion gives you the choice to enable a permadeath mode where if your character is killed, they won’t respawn and will be removed from your team. Compare this to getting ‘Wasted’ in GTA – being arrested, punched, or taking fall damage won’t kill you (but they will put your team member out of action for a period of time), whereas getting shot enough or being blown up will.

I would highly recommend turning on the permadeath mode, as not only does it make sense in terms of the games’ wider theme of a collective organisation working together rather than one individual, it also raises the stakes. Losing your favourite operative (which in my case was my police officer-turned-DedSec member) in a shootout is more devastating to simply being killed in GTA. For that character, there are no do-overs. It forces you to adjust your playstyle to be less reckless or, in some cases, send in your least essential team members for the less important missions.

When it comes to Watch Dogs: Legions’ missions, there’s very little change from its predecessor. Most missions will see you having to enter an enemy compound, steal or destroy some data from a server/person, and then leave. The variation in characters and their different abilities does prevent this gameplay loop from getting tiresome too quickly, but nevertheless, aside from the missions set in London’s most iconic locations, it doesn’t leave many memorable gameplay sequences once the credits roll.

The recruitment missions, which are required to unlock new operatives, unfortunately suffer from the same issues. Much like the procedurally generated nature of each NPC, the missions are also randomly created, but with little variety. This is made worse by the locations of these missions, as Watch Dogs: Legion seems to love sending you to Camden to talk to a potential recruit, only to then place the mission in Southwark. After a while, the novelty of driving through London wears off and you’ll be taking many trips on the London Underground to fast travel to each mission.

Despite the issues, it’s hard not to be impressed by Watch Dogs: Legions. Any game that includes Three Lions in its soundtrack, which I discovered when walking past a pub in Camden, gets a free pass from me. Since Ubisoft’s most recent scandal confirmed Ubisoft’s commitment to these generic open-world games that rarely diverge from the current gaming trends, it’s refreshing to see the company offering truly unique gameplay elements for once.

‘Microsoft Flight Simulator’ review: our first taste of next-gen is beautiful, and costly