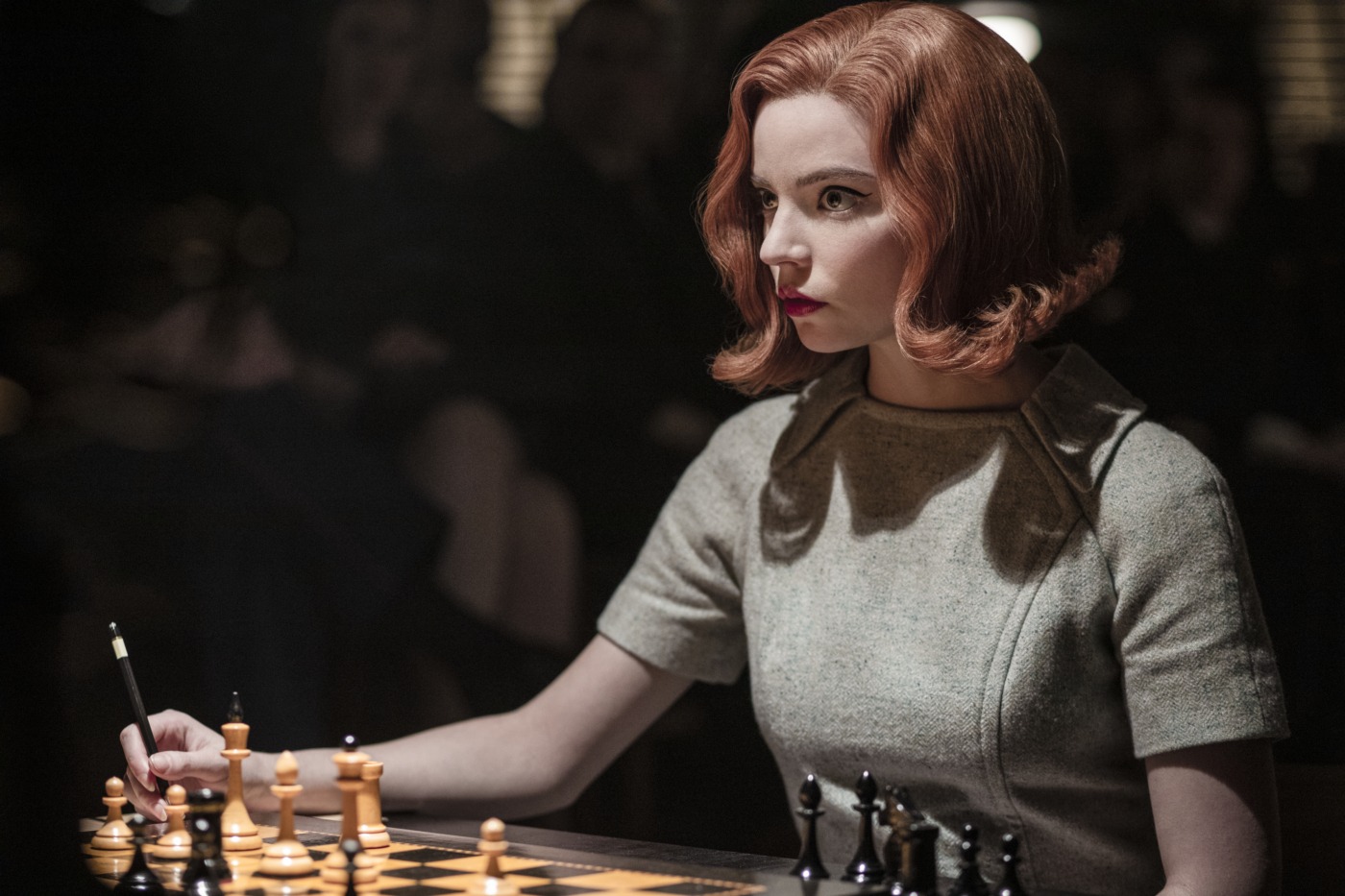 The new Netflix miniseries ​The Queen’s Gambit​ finds its story in the arcane world of chess. It is a fictional account of how a little girl discovers the captivating world of 64 squares in the basement of an orphanage and becomes the greatest chess player of her time. Based on the 1983 book by Walter Tevis, the seven-episode series deals with themes such as drug addiction, alcoholism and being a woman in a man’s world during the 1950s and 60s, through the experiences of child prodigy Beth Harmon.

The chess scenes have been praised by chess experts for their accuracy, with Chess Master Dylan Loeb McClain (who also has written the chess column for the New York Times for eight years) claiming the scenes to be “one of the best and most successful screen adaptations of the game.” Even as someone who had no previous knowledge of the game, I found these scenes to be some of the most entertaining. The choreographed sequences of the match were developed in consultation with Russian Chess Grandmaster Garry Kasparov and celebrated chess teacher Bruce Pandolfini.​ ​With their guidance the actors were able to beautifully portray the character’s flair at the table. The filming of the matches was inspired by the 2014 film ​Pawn Sacrifice​, where the faces of the players were shown more often than the chess board, enabling the matches to be used as a tool to tell the story. Throughout the series we watch Beth (first portrayed by Isla Johnston, then Anya Taylor-Joy) evolve as a player, but we also come to understand her struggle with addiction.

Even as someone who had no previous knowledge of the game, I found the chess scenes to be some of the most entertaining

Her portrayal of flawed humanness is praise-worthy as it is one of the few series that can convey the protagonist’s high intellect without the spectators feeling alienated from the character. Despite Beth’s drug addiction being a subplot, we see how her relationship with the misuse of alcohol and drugs evolve throughout the series, which I believe to be a useful tool in humanising her. In the first episode, ‘Openings’, the orphanage is distributing little green capsules called Xanzolam ( a fictional version of Librium that was usually prescribed in the 60s), which was unfortunately not an uncommon practice used on orphans to keep them calm, rather than help them with their trauma. When a fellow orphan Jolene encourages Beth to save the pills for bedtime, she quickly realises that they can help her be a stronger chess player, and we see this toxic habit become worse with each episode. Not only do we watch Beth wrestle with the conflict of the matches, but her substance abuse triggers her to wonder whether she is brilliant on her own or needs drugs to excel. Although not all of us have struggled with addiction, I do believe we have all struggled with feeling good enough in an aspect of our lives – whether it is academically or socially – which makes Beth’s peculiar character more relatable and loveable.

Notwithstanding, the representation of the link between drugs and genius reminded me of a Stephen King quote in ​On Writing: A Memoir of the Craft​: ‘The idea that the creative endeavor and mind-altering substances are entwined is one of the great pop-intellectual myths of our time”. Although the show demonstrates how Beth realises she is good enough without the drugs, her excellence at the sport is illustrated as intrinsically entwined to her misuse of substances for most of the series, which further perpetuates this myth. However, the depth and the complexity of overcoming the struggles of substance abuse were missed and would have been an interesting opportunity for the show to explore.

Makeup and Hair Designer Daniel Parker had the challenge of convincingly ageing Taylor-Joy from thirteen to twenty-two years old. Beth’s lipstick colour was deliberately chosen to indicate her age as the series progressed. “The lips along with the eyelashes, can temper what the character’s doing, or how the character’s behaving’, explains Parker. “Towards the end, Beth’s shades become similar to her second mother’s (Alma, depicted by Marielle Heller) as an ode to her.” Beth’s passions do not only lie in chess, but also in fashion. We see how Beth becomes more authentically stylish. Costume Designer Gabriele Binger details this by integrating the lines of the chess board throughout her wardrobe. Despite the efforts made in the costume and makeup department, it was difficult at times to truly know how much time had passed between the scenes. The passage of time becomes obscure and this ambiguity allows the plot to falter, particularly during the middle transition period of teenager to young adult.

Despite the efforts made in the costume and makeup department, it was difficult at times to truly know how much time had passed between the scenes

One other drawback from the series was that there was not enough character development for Beth’s black friend from the orphanage, Jolene (Moses Ingram). Considering that the series is set during a time of sociopolitical unrest in the United States of America, it would’ve been interesting to have seen how Jolene evolves from being an orphan to becoming a successful woman throughout the episodes. It was a disappointment that she only appeared in the last episode as the token black friend who offers emotional and financial support to Beth before she leaves to the USSR to attend the Moscow Invitational at the height of the Cold War.

The 2020 series co-created by Scott Frank and Alan Scott was released on Netflix on 23 October and is available to stream.