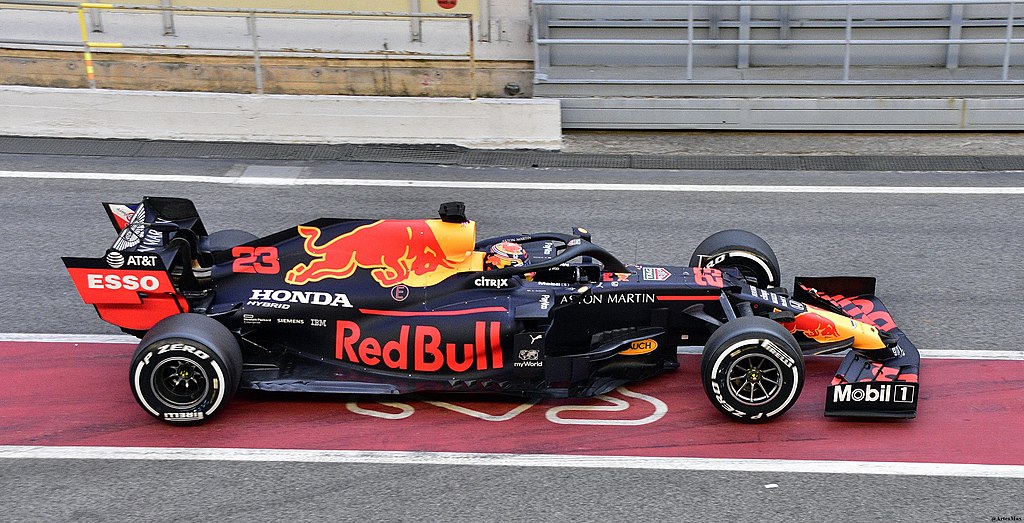 “They race me so hard,” complained Alex Albon over the onboard radio as he hurtled into Turn 1 at the Eifel Grand Prix in the midst of a daring duel with Alpha Tauri’s Pierre Gasly, forcing the French driver to the outside, nearly causing a collision, and losing his place in the process.

This was shortly after the young Thai-Briton foolishly took off Daniil Kvyat’s front wing following a poorly executed overtake. After a five-second penalty was issued, Albon’s race ended in tears when he was forced to retire on lap 24 with a power unit problem. “Unprofessional of him… very poor judgement,” barked a frustrated Kvyat when later asked about his incident with Albon.

The events at the Nürburgring that weekend perfectly encapsulate what has been a pretty woeful season for the 24-year-old. A season where he was meant to impress, the young driver was surely eager to capitalise on a successful campaign in 2019 after being promoted from Alpha Tauri to one of F1’s most coveted seats, at Red Bull, alongside the stalwart pro that is Max Verstappen.

Sadly, it appears that Albon’s season has gone from bad to worse, as if he’s falling into a downward spiral, inevitably cracking under the pressure of being in one of F1’s hot seats. But has the young Thai-Briton’s season really been that bad? Let’s delve further and see how the Red Bull driver stacks up against his team-mate, as well as the rest of the field.

ANALYSIS: How has Albon performed this season?

A shocking 98 points behind his teammate Max Verstappen, who firmly holds third place

Albon currently has 64 points and is sat in ninth place in the driver’s championship, a shocking 98 points behind his teammate Max Verstappen, who firmly holds third place. The points deficit between the two Red Bull drivers is a fairly damning indictment of Albon’s form.

This is further highlighted by the fact that Verstappen has comprehensively beaten the Thai-Briton in every qualifying session this season, with Albon having been, on average, 0.5 seconds slower than the Dutchman. This speaks volumes and it’s clear that Albon is simply not on Max Verstappen’s level, despite being in the same, if not a similar, car.

The young driver was even lapped by Max Verstappen

After a fairly average start to the season with a respectable P4 at the Styrian Grand Prix and a solid P5 in Hungary, it quickly became apparent that Albon was failing to perform at the level expected of him by Red Bull with a depressing P15 at Monza. The young driver was even lapped by Max Verstappen, adding insult to injury. However, it looked like Albon had redeemed himself slightly by taking his first F1 podium at the Tuscan Grand Prix. Or did he?

I can only imagine the sense of relief that must have washed over him following his first podium as he said, with reticence, to his team over the radio: “Thank for sticking with me.” This message gives us an insight into Albon’s psyche – it’s clear that he knew he wasn’t living up to expectations, in a Red Bull team that is known for its harsh scrutiny of their drivers.

However, the sad truth is that the podium wasn’t really a reflection of Albon’s raw pace or skill. Yes, he maintained his pace and consistency within the race and undoubtedly fought tooth and nail for the position, but I can’t help but feel that the podium was only a result of the mishaps of the other drivers. Namely, Lance Stroll’s devastating crash on Lap 42 which knocked him out of contention for P3 and not to mention the fact that Max Verstappen had already retired earlier in the race.

The celebrations were cut remarkably short as Albon’s performance has taken a serious knock in the past three Grand Prix. Retirement at the Nürburgring was followed by P12 at Portimao and a dismal P15 at Imola last weekend, where he finally made a fatal mistake and spun whilst battling with McLaren’s Carlos Sainz – to spectators and pundits alike, it looked like Albon had finally cracked under the pressure.

All of this, I think, has been magnified by the stellar form of Pierre Gasly, whose Red Bull seat Albon took last season whilst Gasly, similarly, underperformed against Verstappen. Gasly has done a tremendous job with Alpha Tauri this year, winning his first F1 race in a spectacular display at the Italian Grand Prix.

Should Red Bull stick with Alex Albon in 2021?

Red Bull have not confirmed who will partner Max Verstappen for the 2021 season. This begs the question: should Red Bull stick with Albon? Personally, I don’t think they should. Red Bull are the only team that can feasibly challenge Mercedes. For the mammoth task that inevitably comes with toppling the reigning champions, they need two fast-paced, consistent drivers with whom they can threaten the Mercedes through strategy and speed. At the moment, Red Bull only have one driver who can do that – Max Verstappen.

”Red Bull needs more from Albon. They need a second driver, because the fact that Mercedes can win the constructors’ championship within a few races, while Max Verstappen is within ten points, says it all. It shows what is possible with that package,” says Sky Sport F1’s Paul Di Resta.

Red Bull are effectively fighting a battle with just one driver

I think Di Resta’s point here beautifully summarises the situation, Red Bull are effectively fighting a battle with just one driver. That being said, Max Verstappen is an immensely talented racing driver and a renowned team-mate killer, few can beat him… even when he’s having a bad day. Whether Alex Albon is dreadfully underperforming or Verstappen is, simply, superbly overperforming remains an interesting question.

What’s next for the Thai-British driver?

I think Albon is an incredibly talented driver who achieved great success in junior formulae, notably finishing P3 in the 2018 F2 Championship, so it’s unfair to say that he isn’t worthy of F1.

I think he’s definitely capable of being a successful F1 driver, it just appears as if he was put into a leading seat at the wrong time and has been unable to take the pressure – he needed time to nurture his race-craft, grow his confidence and establish his ‘racing persona’.

There’s also a noticeable lack of self-confidence in the young Thai-Briton and the post-race interviews where he looks like, at any moment, he could tear up are pretty heartbreaking to watch.

Sadly, I think Albon may have lost his chance in F1 with remaining seats for the 2021 season being few and far between. Yuki Tsunoda looks poised to take the other Alpha Tauri seat alongside Pierre Gasly so I can’t see him returning him to the Italian team anytime soon, which leaves the possibility that he could be left without a drive next season if Red Bull chooses not to renew his contract.