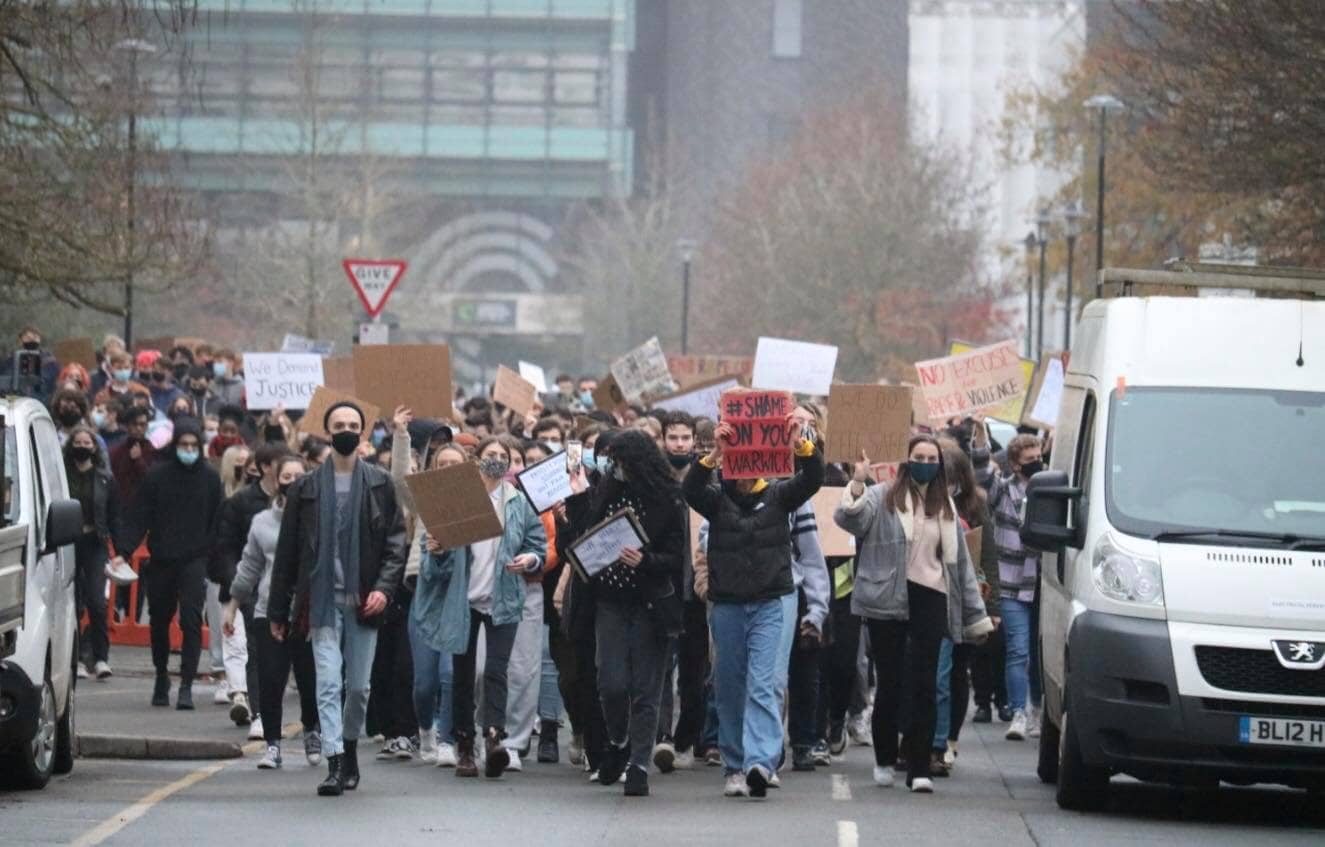 A protest was held on Sunday to signal dissatisfaction with the way the University and Students’ Union handles allegations of sexual assault and other forms of sexual violence.

The Shame on You Warwick protest was hosted by a plethora of societies, including It Happens Here, Sexpression, Warwick Pride, Warwick Enable, Warwick Anti-Racism, Warwick Anti-Sexism and Warwick Mind Aware.

The protest, which was made up of several hundred students, started in the piazza, before marching around the central University campus. It finished with speeches by some of the students who helped to organise the protest.

One of these students demanded that: “The vice-chancellor should take a f*****g pay cut to pay for more counselling for students.”

The protestors chanted as they marched around campus. Some of the chants included “My body, my rules”, “F**k the SU”, and “Don’t tell me how to dress, tell them not to rape”.

Speaking to The Boar, two first-year History students explained why they were at the protest.

The University treats plagiarism with more seriousness than rape allegations

“The University treats plagiarism with more seriousness than rape allegations.”

Last week, a petition was launched along with an open letter by a first-year student, Laila Ahmed. So far, 2,200 students have signed the petition.

In her open letter, she said: “As a first-year student, I simply do not feel safe knowing the amount of sexual assault and rape cases that are occurring on campus. Many of these cases go unreported from the lack of guidance on where to get support and wellbeing from the university.

“Higher sanctions need to be in place for perpetrators who are found guilty of any sexual misconduct and the law around this needs to be amplified to students.”

A Warwick confessions page on Instagram also posted an open letter to the University and Students’ Union this week.

This letter said: “Warwick, you need to be working harder. I wasn’t at Warwick during the rape scandal a few years ago but a friend of mine was and she noticed no real change take place.

“This cannot go on any longer.”

Emilie, one of the protest organisers, said: “I was shocked by the turnout and it was hugely comforting to see that everyone cares as deeply about this issue as we do.

“We hope the university will take these cases more seriously and start taking genuine action to combat this problem. we’re hugely motivated by the amount of support and we’re definitely going to keep going until real change is seen.”

As a University, we are committed to preventing and eliminating all forms of sexual misconduct and recognise the significant negative effects that experiencing sexual misconduct can have upon individuals and we will support them

“We encourage all those who require support or wish to report an incident to visit the Report and Support website (https://reportandsupport.warwick.ac.uk), which will take them through the process of reporting their experience, enable them to do so online and provide full information on the range of support available.

“We also have an Independent Sexual Violence Adviser (ISVA) on campus who is an independent point of contact for anyone who has been affected by sexual violence and she will be offering emotional support and advocacy to anyone who is in crisis and their supporters.

“Those who are found to have broken our University Principles on sexual misconduct, either by the Police or the University’s own disciplinary processes, do face sanctions, which may include Complete Suspension or Expulsion (i.e. permanent withdrawal) from the University.

“As a University, we are committed to preventing and eliminating all forms of sexual misconduct and recognise the significant negative effects that experiencing sexual misconduct can have upon individuals and we will support them, as well as supporting those members of the University community (peers, personal tutors, etc.) to whom such experiences are disclosed.

“We are also committed to providing a supportive and confidential environment where individuals feel confident and empowered to disclose, will be listened to and understand the options available to them – and we will support everyone in our community to challenge inappropriate behaviour where it is safe for them to do so.”