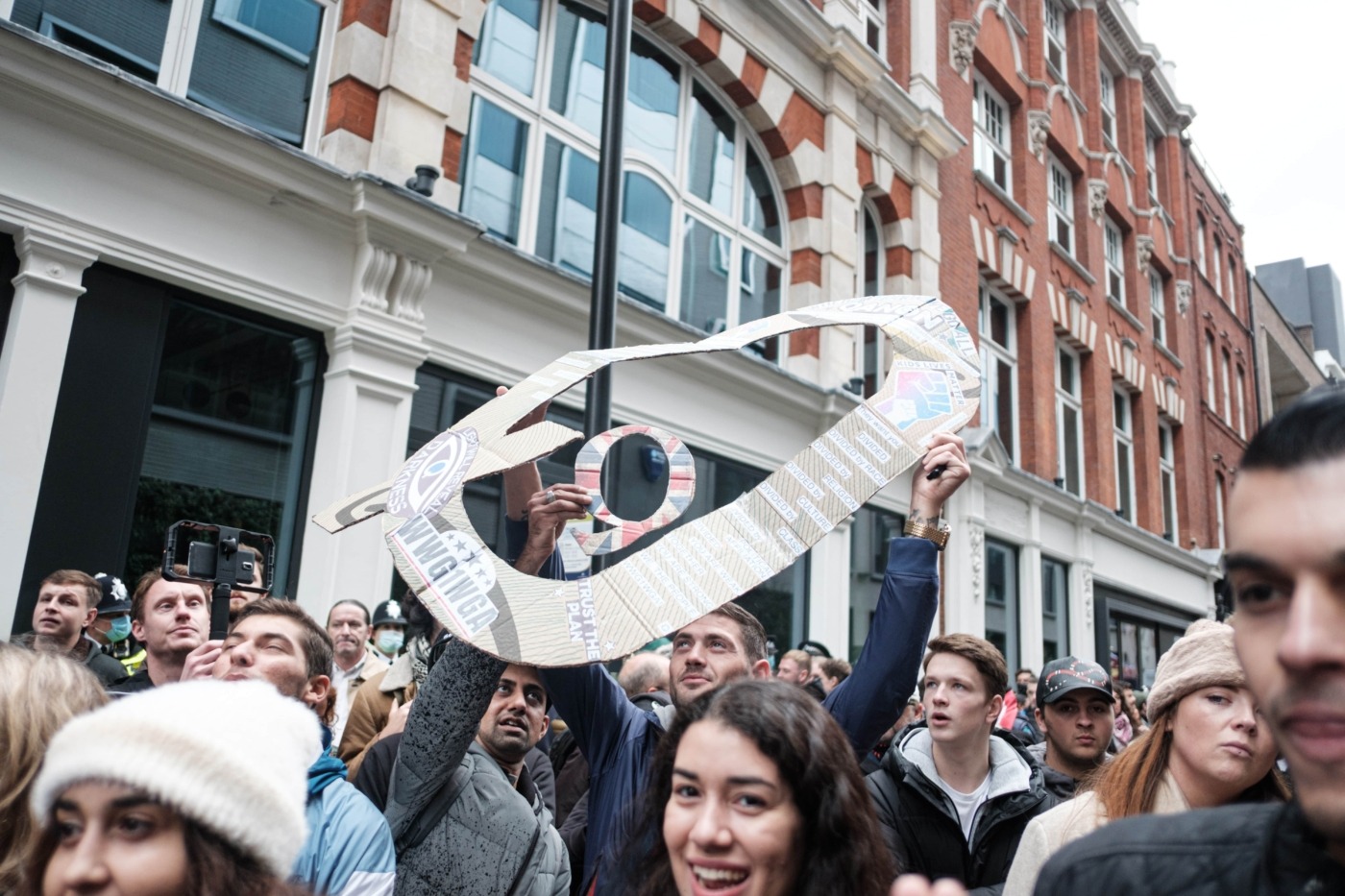 Down the rabbit hole: QAnon, the conspiracy theory taking over the Republican party and threatening American democracy

It should come as no surprise to even passing followers of American politics that Donald Trump has proven himself the most conspiracy-minded president in the last century. This dates as far back as his support for the anti-Obama ‘birther’ movement, right up to his flagrant insistence that the ‘China virus’ was a Democrat hoax. The 45th President has made innumerable statements providing sustenance for internet fringe theories and conspiratorial views.

Nowhere does conspiracy flourish more than on social media, especially in the midst of a pandemic that has barred many from leaving their homes.

Most recently, the ‘QAnon’ theory has gained a degree of popularity among conspiracy theorists. This alleges that Democrats have not only been fraudulently controlling American politics but also kidnapping children for satanic rituals. This has gained both attention and traction as theorists wind up their rhetoric in the looming shadow of the election. Trump himself has addressed the theory, recently banned from many of the major social media platforms, telling crowds that they “like [him] very much” and “love [their] country.”

These combined theories are far more dangerous than they may first appear, and despite the benign appearance, the rapid spread of the movement poses several very real threats to America

The central narrative followed by the numerous streams of the Q-Anon movement started in October 2017, on the infamous anonymous forum 4chan. A user (or group of users) began posting threads of supposedly high-clearance intelligence, announcing that Donald Trump, with the support of leaders in the military and intelligence community, was staging a series of arrests to charge enemies of the state for treason. Particularly emphasised were Trump’s mortal opponents; the Clintons and the Obamas. Over 4,900 posts later and the web of accusations came to include China, Russia, Saudi Arabia and countless political figures. The theory has folded in other conspiracies, including the ‘Clinton Body Count’, Covid hoax theories and even rumours that JFK Jr survived his 1999 plane crash. These combined theories are far more dangerous than they may first appear, and despite the benign appearance, the rapid spread of the movement poses several very real threats to America.

The movement grew steadily on the forums and quickly spread to social media sites such as Facebook and Twitter, taking in Republicans who already despise Democrats in a massively divided America. From here, Q’s information ‘drops’ were broken down into a digestible series of predictions and assertions about Trump’s master plan by influencers and interpreters. A number of accounts flaunted followers in the millions on Facebook, especially as Covid forced Americans to stay home and increasingly turn to social media for interaction.  In the past, censorship against Q, left followers using coded language – such as the number 17, Q being the 17th letter of the alphabet – and disguising themselves under outwardly positive veneers.

In October, YouTube moved to restrict Q-related content on the platform following the lead of Twitter and Facebook to purge harmful conspiracy content from their own. This followed several months of tightening restrictions, such as the removal of Q-associated hashtags from Twitter searches. The decisions have been put down to real-world threats and the spreading of misinformation about Covid and political candidates.

QAnon pages often rebranded as ‘Save the Children’, increasing the draw for well-meaning social media users to unknowingly proliferate the movement

In the wake of their removal from major platforms, and the increasing scrutiny cast by media outlets as the theory came into the public eye, QAnon pages often rebranded as ‘Save the Children’, increasing the draw for well-meaning social media users to unknowingly proliferate the movement. Experts in missing children cases have commented that this shift has actually bogged down their work, flooding centres with emails and calls that have no real-world basis.

There is no verifiability to Q’s wild claims; the second post, declaring the imminent arrest of the Clintons, has still yet to come to fruition three years later. Arbitrary connections are drawn between a phrase used in a Trump tweet and a Q ‘drop’ potentially three years prior. General Michael Flynn, an important player in the Q narrative, posted a video on the 4th of July of himself and several others taking an ‘oath’ for QAnon. Figures such as Flynn retweet and endorse the conspiracy, reinforcing the belief in a ‘Great Awakening’ and drawing in thousands of Americans unaware of the reality that groups like QAnon are a present danger to American democracy.

By design, the theory is dogmatically pro-Trump. Every misstep is interpreted as part of a cunning plan, deceiving the Democrat cabal. Likewise, any negative outcome of a Trump policy can be neatly blamed on those behind-the-scenes Democrats who are sabotaging the president and his plans. The same is said about Q themselves – when predictions don’t come true, the narrative is reworked to portray wild theories as purposeful misinformation to trick media and intelligence outfits.

This exoneration of Trump’s administration prevents real political discussion from taking place in the Q-sphere. Liberals and ‘DemonRats’ are simply wrong, either misinformed or purposefully manipulating the truth: Trump and his followers will always be right in the eyes of Q. It is for this reason that the Q following has been connected with beliefs even before the election result that Trump would not willingly hand over the keys to the White House if he lost the election. Belief in Q necessitates an almost militant opposition to any Democrat individual or policy. With Biden leading in many major polls before the election, Trump continued to undermine faith in the voting process even before knowing the election outcome, spreading his own conspiracies about the Post Office which are quickly folded into the QAnon narratives and anticipating a ‘fake’ victory for challenger Joe Biden.

The phrase ‘fake news’ will perhaps be the linguistic legacy of the Trump presidency, and has undoubtedly coloured the entire QAnon worldview

The phrase ‘fake news’ will perhaps be the linguistic legacy of the Trump presidency, and has undoubtedly coloured the entire QAnon worldview. On similar lines to the President, almost every major news network is interpreted as inherently untrustworthy and in the pocket of the Democrats, China, Russia, or another designated enemy. This distrust of major outlets fanned the flames of dangerous Coronavirus hoax theories, taking cues from Trump’s clashes with health expert Anthony Fauci to declare that the virus was barely lethal or fake. Fauci has since received threats to his life from right-wing users.The QAnon movement has adopted and heightened Trump’s own anti-mainstream media rhetoric, coming hand-in-hand with the decentralised nature of a theory based largely on social media. Celebrities associated with Hollywood have been especially targeted, painted as paedophiles and child traffickers in the complete absence of evidence.

The hold of QAnon on the Republican party has tightened over the last year. Dozens of Republican candidates for the House and Senate have endorsed the theory, and with figures like Marjorie Taylor Greene running in relatively safe districts it is likely that the next session of Congress will include QAnon followers. Clearly, the presence of elected representatives who follow an unsubstantiated theory that preaches inflexibility across the aisle can only serve to widen the fissure between the factions of American politics.

a substantial number of voters were already committed to opposing the Democrats on the basis of fantastical, anonymous internet posts

But it doesn’t stop there; this worrying trend is reflected in the party membership.  A survey carried out by Civiqs found that in early September, only 13% of Republicans thought that QAnon was “not true at all”. With such a broad range of topics touched on in the massive conspiratorial web, it is impossible to know exactly what the other 87% believe. At the extreme, 33% of Trump’s voters think the theory is “mostly true”, indicating a belief in a secret Democrat plot involving paedophilia, child trafficking, and even blood sacrifice. At a time where political unrest and socioeconomic anxieties leave the United States on uneasy ground, a substantial number of voters were already committed to opposing the Democrats on the basis of fantastical, anonymous internet posts.

Given that belief in QAnon necessitates an unwavering commitment to Trump’s re-election, political analysts highlighted before the election the potential conflict that we are now seeing arise due to Trump’s loss. Much of the Q narrative has focused on alleged election tampering by the Democrats, especially the mail-in vote. One USPS employee was found to be  throwing away bags of mail ahead of the election, and was eventually confirmed to have engaged in QAnon conspiracy posts on his own social media pages.

The QAnon belief that a victory for Biden-Harris can only come from corruption and electoral manipulation heightened fears that have unfortunately become a reality that Trump and his followers would not peacefully concede the election result. QAnon followers have been linked to potential terror attacks, in several cases being apprehended with illegal firearms and explosives. These radical-minded fringes of the Q movement have demonstrated willingness to commit violence in the name of the conspiracy, and ultimately in service of Donald Trump.

As the President refused to decry followers of QAnon at his townhall in October, Q’s posts in the weeks before the election promise ‘big booms’ – one of many phrases indicating the imminent reveal of Trump’s next steps in the goal to drain the swamp. Despite a Biden-Harris victory, the QAnon bloc of the Republican party will live on, and continue to spread for the time being. And as Q makes its way across the Atlantic and seeps the shores of the UK, perhaps we ought to pay attention to how this fringe movement pans out.