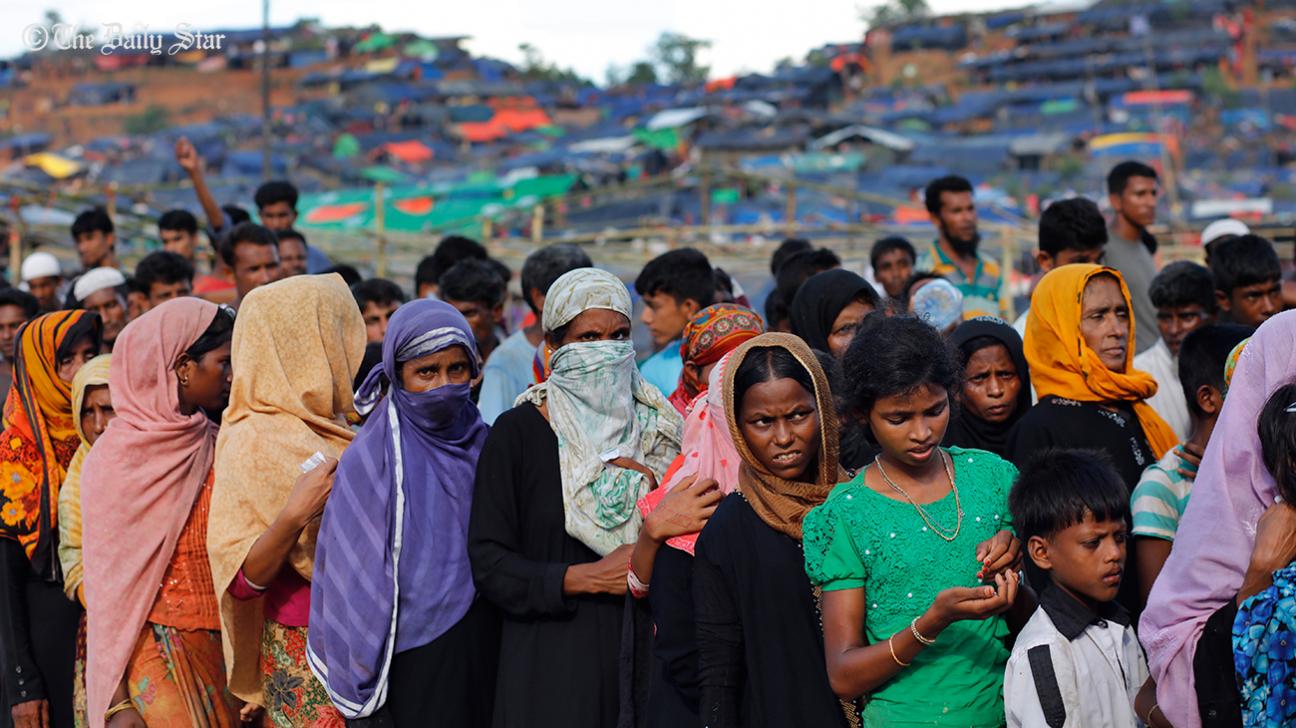 Rohingya Muslims: the most persecuted group in the world

The Rohingya are a Muslim ethnic minority group in Myanmar (Burma), Southeast Asia. They make up the largest percentage of Muslims in the country. The Rohingya are not considered a people of Myanmar and are denied citizenship in the country, effectively making them stateless. At the start of 2017, about one million Rohingya Muslims resided in Myanmar’s Rakhine state. That number has been reduced to half.

United Nations Secretary-General Antonio Guterres described the Rohingya as “one of, if not the, most discriminated people in the world”. Since 2017, they have been brutally targeted by the Myanmar military, with whole villages burned down and masses slaughtered. United Nations’ investigators have accused the army of carrying out a genocidal campaign towards the Rohingya Muslim population living in the state. In 2017, then-United States Secretary of State Rex Tillerson classified the army’s actions as ethnic cleansing. More than one million Rohingya have fled to neighbouring Bangladesh in the past three years, sheltering in the world’s largest refugee camp.

Since 2017, they have been brutally targeted by the Myanmar military, with whole villages burned down and masses slaughtered

Orchestrated attacks against the Rohingya have been carried out for years now and eventually culminated into a full-on mass extermination event reminiscent of the Holocaust. The Rohingya genocide gained renewed attention this year. The International Court of Justice at the Hague ruled in January 2020 that Myanmar must do everything possible to protect its Rohingya population, rejecting Myanmar leader Aung San Suu Kyi’s, a Nobel Peace Prize winner and one-time champion of human rights, assertions that there is no such genocide. She appeared in front of the Hague last year to answer for the allegations of genocide and has been widely criticised for her refusal to condemn or even accept the military’s actions. The Myanmar government has repeatedly denied the occurrence of any orchestrated violence against the Rohingya.

A ground-breaking report in The New York Times last month also reignited public interest in the Rohingya massacre. The report detailed the genocide and mass human rights violations committed by the Myanmar army, known as the Tatmadaw, against the Rohingya Muslims, with two former soldiers who had been actively involved in the atrocities giving their personal accounts.

Myo Win Tun and Zaw Naing Tun are the first members of the Tatmadaw to openly confess to taking part in the genocide. The soldiers claimed to have wiped out dozens of villages and murdered scores of innocent men, women, and children, throwing their bodies in mass graves. “Kill all you see, whether children or adults,” was the order they say they were given by their commanding officers. Their battalions burned down whole villages and raped numerous women. The testimony by the soldiers is the first piece of evidence from the direct perpetrators of the crime, corroborating evidence collected from witnesses including the numerous Rohingya refugees.

“This is a monumental moment for Rohingya and the people of Myanmar in their ongoing struggle for justice,” said Matthew Smith, CEO of Fortify Rights, a human rights watchdog. “These men could be the first perpetrators from Myanmar tried at the ICC, and the first insider witnesses in the custody of the court.”

The crimes committed by the soldiers’ battalions are just part of the vicious ongoing assault launched by the Myanmar authorities three years ago. Survivors and witnesses of this massacre said they saw government soldiers stabbing children, cutting off boys’ heads, gang-raping girls, blowing up houses, burning entire families to death, and rounding up dozens of unarmed villagers and executing them. The UN human rights office said that government troops had targeted “houses, fields, food-stocks, crops, livestock and even trees,” making it “almost impossible” for the Rohingya to return home. Entire villages have been razed and the Rohingya’s homes and all traces of them have been under attack. Thousands of Rohingya have been killed and hundreds of villages destroyed.

The latest genocidal campaign began in August 2017 after a series of attacks by a group of Rohingya militants calling itself the Arakan Rohingya Salvation Army (ARSA) on Myanmar military and police outposts killed more than seventy people. In response, the army launched a vicious crackdown on Rohingya villages in Rakhine state which caused the mass exodus of hundreds of thousands of Rohingya to Bangladesh and started the present-day genocide.

Widespread reports indicate indiscriminate killings and burning of Rohingya villages, escalating to the point that the UN Human Rights Commissioner called the situation in Myanmar “a textbook example of ethnic cleansing.”

The 2017 military crackdown was preceded by a similar attack on a security post along the Bangladeshi border in 2016 which killed nine police officers. The army responded to that with a month-long crackdown on unarmed Rohingya civilians, causing over 1,000 civilian deaths and driving tens of thousands more to flee their homes. In 2016, a UN official accused the government of carrying out ethnic cleansing of the Rohingya. It was not the first time such an accusation had been made. In April 2013, HRW said Myanmar was conducting a campaign of ethnic cleansing against the Rohingya. The government has consistently denied such accusations.

Violence between Rohingya Muslims and the Rakhine-native Buddhists has been prevalent for a long time. The Rohingya face discrimination both from their neighbours and their own home country. Buddhist nationalist groups regularly call for boycotts of Muslim shops, the expulsion of Muslims from Myanmar, and attacks on Muslim communities.

The Rohingya are not recognised as one of Myanmar’s 135 official ethnic groups due to a 1982 law that stripped them of citizenship and restricted their rights to study, work, travel, marry, practice their religion, and access health services. They cannot vote, and limits are placed on them entering certain professions such as medicine or law or running for office. Nearly all of the Rohingya in Myanmar live in Rakhine state and are not allowed to leave without government permission. It is one the poorest states in the country, with ghetto-like camps and a lack of basic services and opportunities.

The Rohingya are not recognised as one of Mynamar’s 135 official ethnic groups due to a law that restricted their rights to study, work, travel, marry, practice their religion, and access health services

This aversion to the Rohingya started during the British rule over the Indian subcontinent from 1824 to 1948. There was significant migration of labourers to what is now Myanmar from today’s India and Bangladesh. This migration was viewed negatively by the majority of the native population. After independence, the Myanmar government viewed the migration as illegal, and refused citizenship to the majority of Rohingya, according to HRW.

Azeem Ibrahim, a Scottish academic, said that much of the animosity could also be traced to World War II, when the Rohingya fought on the British side and many Buddhists in Rakhine fought for the occupying Japanese. After the Allies won, the Rohingya hoped to win independence or join East Pakistan (today’s Bangladesh), which was also majority Muslim and ethnically similar to the Rohingya. But the British decided that the Rohingya areas would become part of newly independent Myanmar (then Burma). Myanmar’s leaders soon began stripping the Rohingya’s rights and blaming them for the country’s shortcomings, claiming the Rohingya were illegal migrants from Bangladesh who had stolen land. Some Buddhist monks said the Rohingya were the reincarnation of snakes and insects and should be exterminated, like vermin. The persecution fuelled a new Rohingya militant movement, which staged attacks against Myanmar security forces until things blew up in August 2017.

The Myanmar government’s consistent refusal to acknowledge the occurrence of any such violence echoes China’s denial of the Tiananmen Square massacre and Turkey’s denial of the Armenian genocide. Disinformation and rewriting history are expected when the corrupt and sanctimonious take power. Aung San Suu Kyi accused the Rohingya and their supporters for spreading fake news and creating an “iceberg of misinformation.” Myanmar’s military has accused Rohingya of burning down their own homes to garner international sympathy. During her argument at the Hague, Suu Kyi did not use the words Rohingya, a term rejected by the Myanmar government, who refused to recognise the Rohingya and call them Bengalis instead.

International response to the atrocities has been mixed. While the ICJ and UN have taken notice, some of the world’s most powerful countries have stood by silently. Countries like China, Russia, and India in particular have complex relationships with their own domestic Muslim population and have as such avoided chiding Myanmar. The treatment of Uyghur Muslims, Kashmiri Muslims, and Chechen Muslims by China, India, and Russia respectively attracted international condemnation not dissimilar to that received by Myanmar. Each state believes that these minority groups pose a threat to the territorial integrity of their countries and so has been repressing and subjugating them. Therefore, any criticism or action taken against Myanmar can call into question the policies of these nations against their own Muslim populations.

Western response however has been more vocal, with news organisations like the BBC and The New York Times publishing frequent reports on the Rohingya crisis. US President Donald Trump and his administration have also been very critical of Myanmar’s treatment of the Rohingya, placing sanctions on Myanmar in response to the genocide.

The response of the Islamic world has led to some progress as well, with the ICJ case being filed by the Muslim nation of the Gambia with support of the 57 nations of the Organisation of Islamic Cooperation. The case led to a victory ruling for the Rohingya, but ICJ rulings have no international effect unless the UN Security Council enforces them. Whether or not that will happen remains to be seen. As of now, over 1,000,000 Rohingya Muslims find themselves without a home.