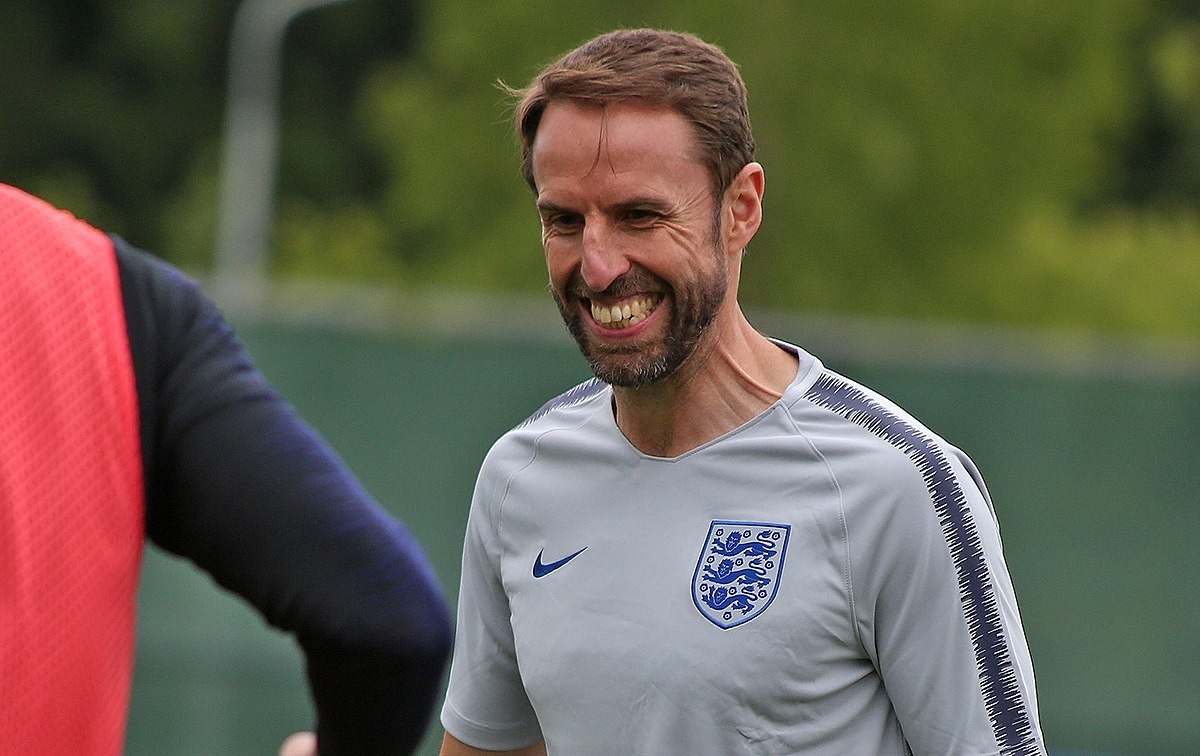 England returned to winning ways last night, beating Wales 3-0 in a friendly behind closed-doors at Wembley Stadium. Three Lions debutant Dominic Calvert-Lewin gave England the lead before the interval, with Connor Coady and Danny Ings scoring from set-pieces in the second half.

England manager Gareth Southgate opted to make changes to the side that limped to a goalless draw against Denmark last month, promoting Calvert-Lewin, Ings, Bukayo Saka, Jack Grealish, and Nick Pope to the starting line-up. There was also a change of system from the former-Middlesbrough manager, with England switching to 5-3-2 formation for the visit of Ryan Giggs’ Welsh side.

The visitors – who travelled to London without Gareth Bale, Aaron Ramsey, and David Brooks – named a youthful line-up, with Rabbi Matondo, Ethan Ampadu and Tyler Roberts included among the starting eleven.

A largely insipid opening 45 minutes was punctuated by Calvert-Lewin’s debut goal, with the Everton forward breaking the deadlock after 26 minutes. Aston Villa stalwart Grealish provided the assist, breezing down the right flank and lifting a cross towards the far post for his towering teammate.

Calvert-Lewin – a player in fine form under Carlo Ancelotti on Merseyside – had the look of a forward who was never going to miss. With an air of unwavering confidence, the 23-year-old dispatched a driven header beyond the reach of Wayne Hennessey.

Despite controlling the majority of the first half, talk among England supporters during the interval focussed once again on Southgate’s credentials. Criticised for playing with an abundance of caution, the charge against the incumbent England manager is that his preferred style of play is too defensive.

The nature of discussions held during the break suggest that the legend of the waistcoat has faded – perhaps the honeymoon period is over?

Across the border in Wales, a mild discontent emerged throughout the second half. Faced with an English side wholeheartedly dedicated to defending, the travelling Welshman failed to truly test Pope.

Within eight minutes of the restart, Coady connected with a Kieran Trippier freekick to double England’s lead. The Wolves centre back was first to react to Trippier’s cross, rifling an instinctive volley into the Wales net.

Both managers made a raft of changes in the 30 minutes that followed, with Tyrone Mings, Harvey Barnes, James Ward-Prowse, and Ainsley Maitland-Niles making cameo appearances for the hosts.

Wales defender Chris Mepham suffered an injury scare in the final minutes of the game but recovered to see out the final moments of the contest. The result marks Wales’ first defeat in 15 months – albeit a run marked by the disruption caused by the ongoing coronavirus pandemic.

Grealish’s performance will have done his cause no harm

Of the players awarded match-time by Southgate, it was Coady, Calvert-Lewin, and Grealish that impressed for the hosts. Coady – who was asked to marshal England’s back three – was a calming influence throughout the team, ending the fixture as the Three Lions’ makeshift captain.

When asked about his goal, Coady said:  “I’m still in shock to be honest, it’ll live with me forever. It’s an amazing night for me. It’s just an incredible night honestly.

“I can’t explain it. To play with these players is incredible for me, the feeling of it and everything about playing at Wembley for England – I’ll never forget it.

“You want to come and impress, everyone does, but I want to help whenever I’m called upon. I will make sure I’m ready and I’ll give 110% every time I play for my country.”

Calvert-Lewin told ITV that his role in England’s win over Wales made for a dream debut. “It’s a shame there are no fans here to celebrate and my family aren’t here,” Calvert-Lewin said: “It’s bittersweet in that sense but to score on my debut it’s the stuff of dreams.

“I’ve worked very hard to get here, it’s felt like a long road but I’m very happy to be here and to get the opportunity and the goal.”

Grealish – handed the freedom to roam at the heart of England’s midfield, dazzled for the hosts – exerted further pressure on Southgate to make the Aston Villa star a more significant part of his plans. With the EUROs scheduled to take place next summer, Grealish’s Man of the Match performance will have done his cause no harm.

Both sides return to action on Sunday, with England hosting Belgium and Wales travelling to the Republic of Ireland in the UEFA Nations League.