When I was about 13 or 14, I had to read Charles Dickens’ Great Expectations at school. I found the language and pacing incredibly difficult to deal with, but I did find myself intrigued by the story, with its vivid, sympathetic characters and palpable gothic atmosphere. At the end of the school year we were shown an old black and white film adaptation of the story. Pretty much all of the class were utterly bored during the lengthy screening.

It was slow, it was based on a book that we hadn’t wanted to read anyway and worst of all, it was in black and white. We wanted to go home. Over the years as I’ve developed a true appreciation of film, especially older films and most especially 1940s British classics, I’ve felt my mind wander back to that screening. Images stuck out to me. Victorian gentleman smuggling a convict into the dead of night in a rowboat. The stark coldness, isolation and deathly atmosphere of the marshes.

A cavernous decrepit mansion lit by a single candle. After a recent viewing of the David Lean’s epic Laurence of Arabia, I discovered that it was Lean who had directed the adaptation of Great Expectations that I’d had to suffer through all those years ago. I decided to watch Great Expectations again. Luckily, the ever reliable CEX in Cannon Park had a copy going for £1.50. Without WiFi to tide me over at my accommodation, I settled in for the evening and put the DVD on.

Within less than a minute, I loved it. We follow Pip, a young and impoverished Blacksmiths’ apprentice who in his youth takes pity on an escaped convict and falls madly in love with Estella, a young girl who has been manipulated by her cruel mother, the jilted and wealthy spinster Miss Havisham, to lack all empathy and seek only to destroy men’s hearts.

After Pip comes into a great inheritance from an unknown benefactor, he leaves home for London where he becomes a gentleman and spends the remainder of the story endeavouring to win Estella’s hand and discover the mystery of his benefactor and the strange Miss Havisham. Pip is an incredibly sympathetic child whose sudden inheritance, lengthy obsessive unrequited love for the heartless Estella and friendship with the courteous and wealthy Herbert Pocket moulds him into a complex man, disconnected from his harsh upbringing, guilty at his snobbishness and desperate for an unrealisable love.

Other characters include Joe Gargery, an immensely likeable and decent human being who serves as Pip’s surrogate father, as well as the quirky and good-humoured Wemmick, the enigmatic Magwitch and perhaps most notably of all Jaggers, a seemingly brusque and uncaring lawyer who is revealed to have a hidden and deep compassion. It is Jaggers that serves as the central piece at the centre of the elaborate mystery, connecting disparate characters in an engaging, well-crafted melodramatic romantic mystery.

All characters are well cast, and especially notable are the performances of a young Alec Guinness as Herbert Pocket, giving the role a bumbling youthful energy, and Valerie Hobson as the effortless charming and unthinkingly cruel Estella. Both would later star in Kind Hearts and Coronets, another 1940s British classic which is potentially the best film ever made.

Lean’s Great Expectations is notable for being the first ever British film to win the Oscar for best cinematography and it clearly deserved it. Fantastically moody and ominous location shooting on the marshes of the Thames Estuary immediately establishes the gothic tone of the story, with a particularly noteworthy shot following the small silhouetted figure of our hero Pip as he runs on raised land below an enormous and foreboding sky.

The very next scene again demonstrates the incredible visual style of the film, as Pip visits the grave of his parents in an empty and dilapidated churchyard, full of crooked tombstones, withered trees and uneven ground. This churchyard set is incredibly expressive and gorgeously photographed in sumptuous black and white.

These early scenes seem to tell us everything we need to know about the loneliness and compassion of our instantly sympathetic young hero and the utter hopelessness of the environment he’s trapped within. An array of picturesque sets and vivid filming gives the film a consistent visual charm and splendour as we follow Pip in his journey through mansions, ballrooms, offices of the law and bustling city streets.

The style of the film put me in mind of several other cinematic classics, with the dark fairy tale atmosphere of Miss Havisham’s estate reminding me of Cocteau’s La Belle et La Bête, the emptiness of the marshes and the stark visuals of the churchyard reminding me of Charles Laughton’s German Expressionist-influenced film The Night of the Hunter and the combination of splendid period costumes and gorgeous location filming evoking Renoir’s Partie de Campagne.

The visuals strongly support and convey the themes and atmosphere of the story: a morbid but ultimately hopeful tale about class, wealth, love, rejection, isolation, friendship, compassion and inner humanity. The richness of the visuals is happily matched by the strength of the story and its characters. As a Dickens adaptation, Lean clearly had excellent material to draw from and in translating the lengthy story and large cast of detailed characters into a two-hour film, he comfortably succeeded, thanks in part to Jack Harris’s superlative and pacey editing.

Great Expectations enveloped me and enthralled me for two hours thanks to its creative, captivating direction and the strength of its story and characters. The central mystery of family, wealth and class at the heart of Dicken’s classic is brought to life in this joyous adaptation, which manages to furnish the strength of the original text with memorable imagery, pacey and entertaining editing and a bewilderingly nostalgic charm. I can’t believe that I ever felt anything but love for it. 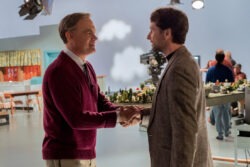