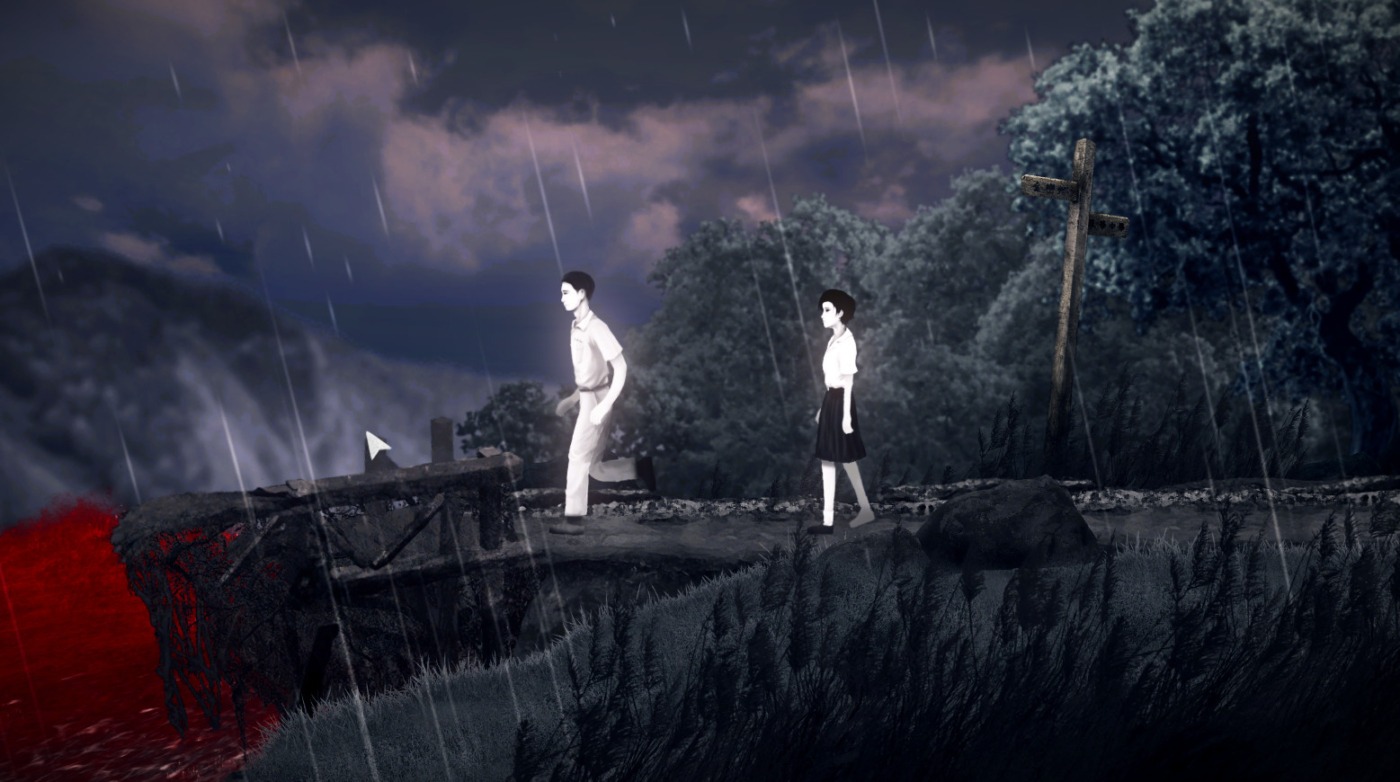 For as long as I can remember, I’ve been a horror-game fanatic. Indie horror, in particular, has been an interest of mine for a while, but the majority of the games I’ve played have either been American or Japanese in origin. To my knowledge, Detention is the first Taiwanese game I’ve ever played, and it certainly didn’t disappoint. It’s not just an unsettling horror, twisting your expectations and inverting classic tropes, it’s also based heavily in local folklore, and tells a story of real suffering during the ‘White Terror’ of Taiwan.

It should be worth noting that this wasn’t my first exposure to this game – when it was released by Red Candle in 2017, I skimmed the first few minutes and found it not just cliché but dull. Wandering around a creepy school, all painted in dull grey tones, in the middle of a thunderstorm with ghosts potentially lurking around the corner? It’s interesting, sure, but overdone.

Franchises like Corpse Party, as well as independent games like Misao and Related, have done this concept to death since the 1980s. Initially, Detention seems to bring nothing new to the table except the setting – it’s one of the first horror games to take place in 1960s Taiwan.

In fact, the game intentionally draws you in under false assumptions, only to pull a complete 360 after the prologue finishes. When you start the game, you play as Wei (a teenage boy), and immediately assume he’s the protagonist of the story, Only for him to die abruptly. Suddenly, you find out the game is from the perspective of his schoolmate, Ray. She’s trapped in her own personal hell – literally – and the player uncovers the story of her life as they stumble blindly through the unfamiliar territory. This is definitely not your conventional high school: there are political prisoners in the basement of the clubhouse, and the presence of the military lingers just as much as the moaning ghosts who patrol the hallways.

By far, the story and visuals are the strengths of this game. Horror lies in the personal and political and how they both interact, as Ray’s struggles at home with her drunken, cheating father and her grooming by a teacher merge with the brutal regime of martial law and books being burnt in the schoolyard. Both at home and at school, people have a tendency to be taken away by the military if they step out of line, and the same tension and fear pervade the haunted school. It feels as if Ray could be snatched up any moment and it could be ‘game over’.

The imagery in this game is intense: there are eyes everywhere, the collectors of souls leer, and a white jade deer pendant hangs around Ray’s neck, said to protect the miserable and alone. Praying to shrines allows you to save, while burning spirit money or spilling the blood of the innocent allows you to move forward. A sense of the inevitable creeps up your spine even as you’re trying to protect Ray from dangers – it feels hopeless. Notably, the game even makes the player an outsider, as you watch Ray’s story from outside the school, peering through broken windows. The player is just an observer and can only guide her, unable to intervene.

Actually, that’s not quite true. The player does get a choice in the final chapter of the game, which ultimately decides Ray’s fate, much like popular indie game One Shot. Obviously, I’ll let you find out what the choice is for yourself, but I will say it’s necessary to pay attention to Ray’s story in order to make the right one. Mimicking the school environment, whether consciously or not, the choices at the end reminded me of a test you might take in class – have you been paying attention and what have you learnt?

As for the off-putting greyscale of the game, it creates a sense of the world through Ray’s eyes. It’s cold, lonely, and unforgivable. While the slow pace at which she moves is initially irritating, almost as if she’s reluctant to move forward, it just adds to the sense of fear later on, as it feels impossible to escape the threat of wandering spirits. Some players may dislike that the game is a 2D side-scroller, but I would argue it’s just as immersive and gripping as any 3D game.

I had never heard of the White Terror, but this game drew my attention to it, and meant that I was faced with real-life atrocities I knew little about

Players may be put off by the stilted dialogue of the game – as some translations do sound odd in English – but I can hardly fault the translators for it. I’ve been studying Mandarin for several months now, and it’s structured completely differently to English, which is one of the reasons it’s so hard to learn. Some concepts are also hard to explain- for example, “了” indicates that there has been a change of state, which is tricky to put into English well. However, people who are fanatical about grammar may struggle to complete this game.

However, this game more than makes up for the occasional translation oddity in its unique game mechanics. Ray is completely stripped of her autonomy and is unable to fight back against the many spirits that she’s faced with. Instead, she has to hold her breath until they pass to avoid detection, which would be fine. However, she can only hold her breath so long. As she’s waiting, her vision slowly starts to blur as she runs out of oxygen until she finally has to gasp for breath. It’s not just realistic, but terrifying as well, and has you holding your own breath.

By far, one of the best aspects of this game is how it exposes you to the history and culture of Taiwan, which few people in the West know much about. Before playing this game, I had never heard of the White Terror, but this game drew my attention to it, and meant that I was faced with real-life atrocities I knew little about. In short, it was a period of martial law in Taiwan, which went on for several decades. Anyone who went against the regime by reading forbidden books, for example, was imprisoned or even killed – including school children. Detention is largely based on real-life events that took place at a school during this time, although to mention them explicitly might spoil the game. Not only does this game expose you to these events, but it also leaves you desperate to learn more about them – I was disappointed to find little information online about it after finishing the game.

Overall, I would definitely recommend this game to anyone who’s a fan of horror or indie games. Not only is it an amazing game, but it’s a cheap one too, costing less than £10 and providing several hours of (albeit tense) enjoyment and education. It has quickly become one of my favourites – sorry, Oxenfree, but you’ve been bumped down the list – and I’d like to apologise to the developers for judging it so quickly. Next time, I’ll at least finish the prologue before writing a game off.