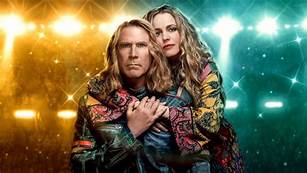 Had the coronavirus not flipped the world on its head, Fire Saga’s plotline might have become even more detached from reality by the time it was released. Iceland’s entry for Eurovision 2020, Daði og Gagnamagnið’s ‘Think About Things’, achieved internet virality at the start of the year and was among the favourites to win the competition.

In the world of Fire Saga, Iceland’s entry is an altogether different proposition. Ferrell, the film’s star and co-writer, is a self-confessed Eurovision superfan, and it shows in the film’s representation of the competition.

Fire Saga – directed by David Dobkin – is as outlandish and ridiculous as you would expect it to be. With several quips directed at the expense of Americans, Fire Saga pays homage to the zenith of European art and culture.

McAdams provides the most obvious standout performance from across the cast

Ferrell’s performance as Iceland’s enigmatic Lars Erickssong is vintage Elf. In a display imbued with energy, there are instances when Ferrell’s Californian twang protrudes through his Icelandic persona. That said, a comical authenticity lingers. Dan Stevens’ performance as Alexander Lemtov – the Russian contest in Edinburgh – is peak Eurovision. Ridiculous, over the top, and yet amusingly alluring.

McAdams must also be commended for her performance as the film’s co-protagonist. Fire Saga was never going to be defined by award-winning acting, but McAdams provides the most obvious standout performance from across the cast. At the very least, her Icelandic accent bests Ferrell’s efforts quite comprehensively.

Likewise, it would be amiss to ignore Graham Norton’s cameo appearance. Cast in the role as Graham Norton – much like Lorraine Kelly’s portrayal of television presenter Lorraine Kelly – Norton’s inclusion adds an element of reality to what is otherwise a film defined by its surrealism.

Netflix clearly did their homework. Fire Saga is laden with lasers, machinelike presenters and a lethal cocktail of Europop, Eurobeat and simply nonsensical lyrics. The decision to set the contest in Edinburgh is peculiar – even the most optimistic Brit would chuckle at the suggestion that the UK could win Eurovision in the context of Brexit.

The film’s protagonists, Lars Erickssong and Sigrit Ericksottir, travel to Edinburgh without the support of their hometown, Husavik. Lars’ father (Pierce Brosnan) is wholeheartedly disapproving of his son’s musical exploits. Sigrit’s mother (Nína Dögg Filippusdóttir) believes that her daughter is wasting her time on Lars.

Brosnan’s performance as Erick Erickssong is a touch underwhelming. Cast in the most irreverent role of his career, Brosnan’s showing is predictable and somewhat limited by his lack of screen-time. Had Brosnan been afforded more time in the spotlight, his role as Lars’ father could have been transformed from banal to film-defining.

However, much like Elf, Fire Saga is a heart-warming tale. Ferrell clearly revels in the freedom that comes with playing a character so bizarre. Thrillingly, McAdams is afforded comparable levels of absurdity. Fire Saga is vintage Ferrell: it has all the hallmarks of a film that has been retouched by an actor who has played the likes of Ron Burgundy and Chazz Michael Michaels.

An astonishing number of elements are whisked together in Netflix’s latest effort, although it is tricky to feel overwhelmed given the rate at which Fire Saga rushed to its denouement.

At worst, Fire Saga is a film you won’t forget on account of its sensationalism. At best, Fire Saga will leave you humming ‘Ja, Ja, Bing Bong’ for days on end. In the words of Chazz Michael Michaels, Fire Saga is “provocative; it gets people going”. Watch it. 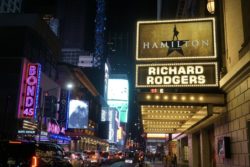 Gallery image with caption: ‘Hamilton’ highlights the ultimate irony of America with its musical numbers