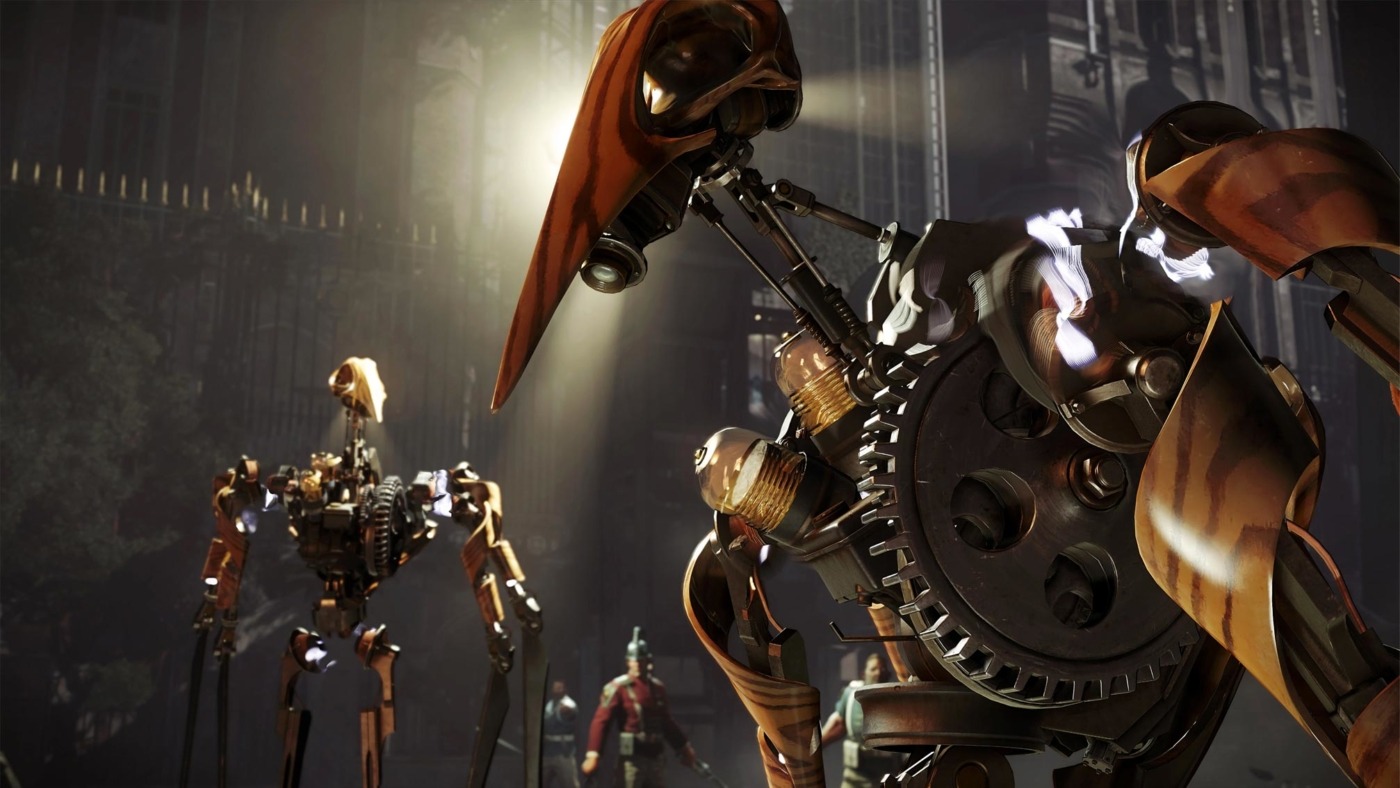 Dishonoured 2 sat on my hard drive for over 2 years. I had enjoyed the first 3 levels enough to think I might come back to it someday, but I never summoned the will to get past a mission called The Clockwork Mansion. Of course, at the time I was busy with other things, and I didn’t take my Xbox to uni, so I had enough reasonable excuses for why I never picked it back up until now.

Playing through it in the last month reminded me of another reason why I put down the game, and that reason is that the level was deeply unnerving. I wouldn’t go as far as to call Dishonoured a horror game, although its dark satire does borrow ideas and tropes from the genre at times. No, this level was just unnerving. It created a feeling of unease that I still felt playing in 2020, in fact, more so now than ever. In the first of a three-part-series on Dishonoured and what its dark political satire and worldbuilding can tell us about the fears that are so pressing in this day and age, I will explain just why this level is uniquely unsettling.

The level takes place in Serkonos, where the deposed Empress Emily Kaldwin is tracking the conspirators behind her overthrow. In this particular instance, you are tasked with breaking into the mansion of Serkonos’ Grand Inventor: Kirin Jindosh. He has been creating clockwork soldiers which have bolstered the insurrectionary force.

These metal monstrosities are more than twice the size of normal human soldiers; they have blades for arms and vision from both the front and back, meaning they counterintuitively need to be approached from a perpendicular angle. Their sharp metal design is imposing. Indeed, Jindosh’s journal states it was specifically made to be as terrifying and alien as possible, as friendly looking clockwork city guards did not have the desired effect. But the real fear these machines instil is not a fear of their alienness to you, but the fact you are alien to them, and yet they hold all the power.

This feeling is all-too-real in an age of big data and predictive algorithms. During the current pandemic, data is being harvested like never before under the guise of public health. Data on who has had the disease, who they have come into contact with, and their movements is harvested to ensure quarantine is obeyed, alongside the biometric data of health apps and the general data collection of the smartphone age. Decisions are made on probability, the likelihood you will do something based on what people like you have done before. Be these decisions about public health, or simply which advertisements are most likely to result in a sale, they neglect the less possible as impossible in their probabilistic decision making.

This lack of understanding is quite common. My favourite instance is people getting mad at statistician Nate Silver on Twitter and ridiculing him for predicting the 2016 election wrong when his model predicted Trump a 29% chance of victory. This shows his victory was more probable than flipping tails twice in a row, but as it wasn’t the most probable outcome, it was simply unconsidered in the thoughts of many who read it.

When it’s just five Twitter accounts making these errors, it can be a source of great enjoyment. When it becomes guidance of national policy, however, it is dystopian. In a sense, it reverses innocent until proven guilty, going even beyond guilty until proven innocent to suggest a person is preemptively guilty of a choice they haven’t yet made. Therefore, any choice becomes grounded in the dichotomy where I must either do as is expected of me or explain my non-conformity, my aberration from the data. It is not illegal to be different, but the idea that you are predicted to do something influences the choice because you know the prediction has been made. You have to explain your deviancy to yourself, first, and others possibly. It isn’t freedom if you have to explain yourself.

Say, for instance, I get predictive ads from a shampoo company. They wouldn’t pay for it if it didn’t convince more people to buy, but the fact it’s pushed into my feed makes me less likely to buy it, as I see it as insidious manipulation. But the very fact I now choose not to consider that brand means I am wasting time trying to second-guess marketing techniques and justify my actions to myself, all based on a shampoo brand I probably had no strong feelings on before. What I really want is to not think about the brand at all, but that isn’t possible under neoliberal capitalism where you are forced to consume the eye pollution of advertisement at every turn.

The real fear these machines instill is not a fear of their alienness to you, but the fact you are alien to them, and yet they hold all the power

But how does this relate to the clockwork soldiers and the fear they instill? Mark Fisher writes that at no point can capitalism in our real experience ever drop the mask of PR. Zizek’s invocation of Lacan’s ‘Big Other’ is important here. The ‘big other’ is the official/accepted understanding of an event or system, and it is unconsciously accepted by those who choose to be part of a society, like a buy-in at a poker table.

He likens it to Soviet Communists, who did not know that it was corrupt and malfunctioning. Not the poor people who suffered, but the official narrative places doubt on their convictions because if things were really as they seem to be, then surely people would not allow it to stand? You have probably experienced this on a micro-level if one of your friends has ever said something to you that you know fully to be untrue, but you don’t call them out on their lie. You invent this idea there must be another explanation you simply cannot see.

There must be a reality which reconciles the lie within your perception of someone. This is one of the techniques that is used to manipulate and gaslight people. Of course, such a reality does not exist, but this mechanism allows friendships to endure and societies to function. However, the moment you admit to the ‘big other’ being constructed, it falls apart. Whether this is Gorbachev allowing criticism of the Soviet system, Elon Musk tweeting Tesla stock prices are too high, or outing yourself as a liar to a friend who trusted you, the doubt that was manufactured by the big other is expunged, and they once again assert what they know to be true.

If you admit the neon lights of consumerism are a facade and the striving work ethic of The American Dream is a convenient fabrication, they will fall apart. They instead must be defended by the PR of the system. Capitalist Realism functions to make these options seem at one time the only way because ‘there is no alternative’ and also attractive on their own merits – not merits you happen to experience but that clearly others somewhere else must have, otherwise why else would things be as they are?

I wouldn’t go as far as to call Dishonoured a horror game, although its dark satire does borrow ideas and tropes from the genre at times

The level design can be read as the confines of our society- there are not infinite ways to traverse the landscape, but there are enough ways to be inventive, to be not just unpredictable, but unpredictably unpredictable. Of course, the contention is that the game is designed to be beaten, ultimately. But, surely, the aggregation of data is not designed to beat?

It is a power structure designed to endure and manipulate. That much is true, but this simply makes its downfall inevitable rather than contingent. It is built upon the human analysis that it uses its own analysis to modify. So its analysis can never be static, and by probabilistic decision-making, it ensures a segment will always fall foul of its calculations but does not account for how this will change them.

Like the consumer who chooses not to buy the over-advertised shampoo, the citizen who hates the clockwork life leans into unpredictability, creating a nature immune to data aggregation. Follow and like posts from brands you don’t enjoy. Share posts you disagree with. Deliberately mix up your routine and your routes. Make your data worthless because it is impossible to know you by it.

Only those who get close can know what you are. In this way, you can fight the clockwork soldier in each of your lives. An evil industry invested with enormous expense wants to commodify who you are. The true technological rebellion is to disorient it by giving it that which it cannot process, thus neutralising it. Lean into unpredictability, face the clockwork soldier and redefine yourself for the modern age.

Video games as art and the case of Konami