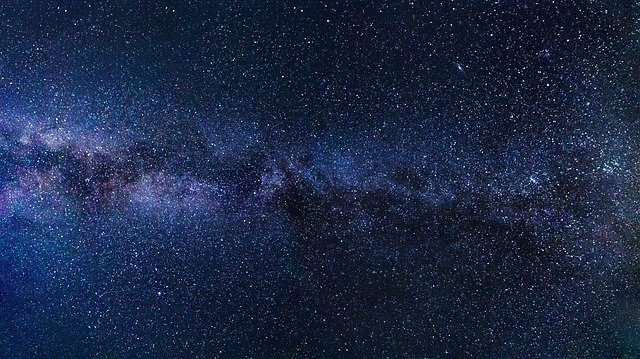 In July last year, the German-Russian Spektr-RG satellite was launched into orbit. On board it carries all of the equipment necessary to act as a cutting edge, high-energy observatory and now it has returned an X-ray scan of the Universe covering the entire sky. This instrument is known as eROSITA and is the main component of the Spektr-RG satellite.

This new image shows evidence of some of the most violent and energetic bodies in the universe including black holes, clouds of hot gas and stars which are moving beyond their main-sequence lifetime in dramatic explosions.

The image is the first of its kind. Never before has a full sky survey been conducted in the medium energy X-ray range. The map shows details that were previously beyond the capabilities of orbiting telescopes and captures within its data over a million X-ray emitting sources. This is a huge improvement on previous scans of the sky which found only about half the number of X-ray sources.

This map is shown, as is common in astronomy, by projecting the sphere of the Universe onto an elliptical image centred on the Milky Way. The new map shows that the galactic plane is where many energetic sources are situated. This plane is where a lot of the material in the Galaxy has settled and this abundance means that radiation from lower energy sources becomes filtered out as radiation moves through space towards our observatories around Earth.

The image also shows a large accumulation of X-ray sources around the centre of the Galaxy which accounts for much of the gas contained within and just beyond the borders of our own galaxy.

Other notable features include accumulations of supernova remnants from the violent deaths of stars greater in mass than our Sun. In these processes, the star can no longer fuel itself and ejects its outer layers in an energetic burst leaving the core surrounded by a heated field of gas and dust.

Away from the midplane and the central regions, much of the image is shown in red to indicate lower energy X-ray emitting sources. This is mostly due to hot gas from well beyond our galaxy but it is also littered with white spots. These spots correspond to highly energetic sources or, super-massive black holes, which sit at the centre of galaxies.

Black holes emit X-rays when they draw in material and then eject streams of radiation from their centre. These sources are so powerful that we can see ancient black holes from when the Universe was only about one billion years old.

Spektr-RG has already provided a wealth of data for astronomers back on Earth but it is still scheduled to have another three and a half years of time operating in orbit and has already begun its next sweep of the sky.

It is hoped that the data returned can be used to re-evaluate the structure of the Universe by identifying clusters of galaxies and studying how they have evolved over time. One of its more ambitious goals is that the project may offer an insight into the nature of Dark Matter which is a hypothesised type of matter unable to interact with light but which could be the key to explaining the accelerating expansion of the Universe.

With three and a half years and seven more complete scans of the sky it is hoped that the number of identified sources can be increased by another factor of ten. This is a highly ambitious project but could supply some of the answers to questions of the formation of our Universe that astronomers are desperately searching for. Over time, more scans will allow for noise to be eliminated in order to clean up the existing data but also, they will allow the telescope to probe deeper into the cosmos in the search for even more sources of X-ray emission.