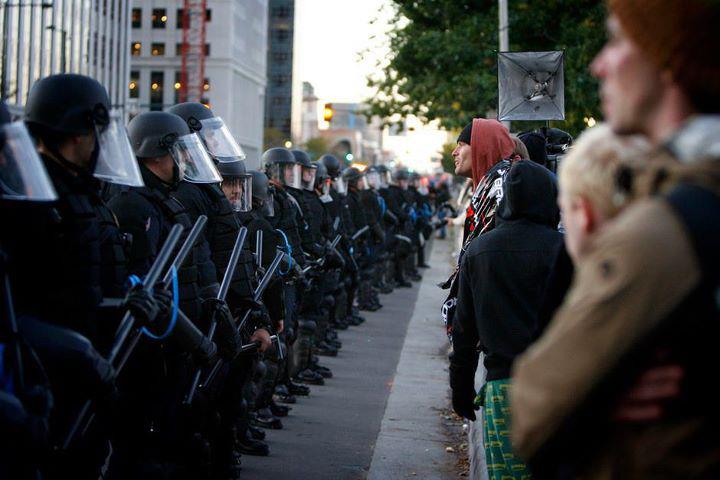 “I can’t breathe”. Eric Garner repeated these words on Staten Island in 2014 as a police officer held him in a choke hold. He was pronounced dead in hospital. Eric Garner was arrested on suspicion of illegally selling loose cigarettes.

“I can’t breathe”. George Floyd repeated these words as a police officer knelt on his neck for almost nine minutes.  He was unconscious for three of those and died. George Floyd was arrested after a shopkeeper called on suspicion of him using a fake $20 bill.

Breonna Taylor was killed by police in her home. A judge signed an order authorising a ‘no- knock’ warrant to search her home on a drugs investigation. The primary suspect of this investigation lived 10 miles away. Taylor’s boyfriend fired on the police believing they were under attack. Taylor was shot 8 times.

These are three examples of police brutality in America. You are three times more likely to be killed by the police as a black person than a white person in America. Protests have spread in response to the killing of George Floyd and to support the #blacklivesmatter movement. Whilst it might be receiving more media attention at the moment, racial bias in the American Criminal Justice System is not new. Nor is the use of ‘excessive force’ by police officers. To understand why it is necessary to look at the historical context. It begins with freedom from slavery.

The 13th Amendment: Neither slavery nor involuntary servitude, except as a punishment for crime whereof the party shall have been duly convicted, shall exist within the United States”.

Slavery, an economic system which the Southern, cotton growing, plantation owning US states relied upon, collapsed following the Civil War. 6 million black people were technically free but without jobs, homes or land.  In some cases, black people in the south were forced into a system of ‘sharecropping’ where they worked the land for free in return for some portion of the cotton crop. Over production of cotton led to its decrease in value. White landowners would insist the black workers could not repay their debt instead forcing them to work more. This was slavery by another name.

The caveat in the 13th amendment to the constitution forbids slavery except as a criminal punishment. Southern states created ‘Black Codes’ and black people were arrested for minor offenses such as loitering on streets. Another loophole which allows slavery by another name.

Fast forward to the turn of the 20th century. Southern states sought to legally separate black and white people under the entirely untrue maxim “separate but equal” referring to Jim Crow Laws. Legal segregation; a lack of jobs in the south; lynchings and KKK activity (often enabled by law enforcement) acted as ‘push factors’ triggering the Great Migration. Large numbers of black Americans from the south moved to new, industrial cities in the north with the intention of securing industry/factory jobs.

Those arriving from the South had similar skills, tended to work in the same factories and earn the same (low) wages. As such they could only afford to live in certain areas of cities creating clusters of black people. White people in northern states were wary of this arrival of black people. Police felt it their duty to ‘protect’ these white communities and white society.

Following WWII the demand for black civil rights took a more formal, organised structure. The 1950s and 60s, saw marches, protests, and the passing of the civil rights Act in 1963 and Voting Rights Act in 1965. The 1950s and 60s saw police brutality too. At protests, police dogs, tear gas and hoses were used to break up crowds. This was also a period of race riots in response to police violence such as the 1967 Detroit riot.

At protests, police dogs, tear gas and hoses were used to break up crowds

It began with Nixon. It is difficult to fight a war without an enemy and so enemies were from common nouns. A War on Poverty; A War on Drugs; A War on Crime; A War on Terror. These are not tangible things to be fought against. Yet they were declared so by multiple presidents.

John Erlichmen, Nixon’s aide, said of the Nixon Whitehouse, “ [it] had two enemies: the anti war left and black people.”. It was 1971 and an official War on Drugs had been declared. Michelle Alexander, historian and author of The New Jim Crow makes the point that the political decision to make “the public to associate the hippies with marijuana and blacks with heroin” demonstrates racist intent in the Whitehouse.

President Reagan continued this trend. He led Congress to increase criminalizing non violent drug users, especially African American drug users, by stiffening the penalties specifically for the crystalline rock form of cocaine known as “crack”. It was this, rather than the powdered version which was more of a problem amongst low income white Americans, that was the focus of policy.

The Voting Rights act passed in 1968 which abolished literacy tests that had been preventing some black voting. Now only those with criminal records lost the right to vote. The 1970s and 80s saw an escalation of black people incarcerated. Those arrested for possession or dealing of crack cocaine received much harsher sentences than powder cocaine.

The 1970s and 80s saw an escalation of black people incarcerated

With these “Wars” as domestic policy, making neighbourhoods and cities safer was the common rhetoric. Police became the main agents of social control, as funding to community support programs was cut. “Only our deep moral values and strong institutions can hold back that jungle and restrain the darker impulses of human nature,” Reagan told the International Association of Chiefs of Police in the fall of 1981.

This war created institutionalised racism across the political spectrum. Under liberal president, Bill Clinton, the total number of state and federal inmates grew more than at any other time. Clinton’s War on Crime introduced much harsher sentencing policies; made it harder to challenge sentences and widened acceptable reasons for the death penalty. Incarceration is the new Jim Crow.

This “war” created institutionalised racism across the political spectrum

In part due to the second amendment, the American police can be seen as more militarily involved than its European equivalents. The US military is permitted to operate with domestic law enforcements for civil disturbances. Local law enforcement have access to military grade weapons which were used by the Pentagon. If citizens have the right to bear arms it is only natural that the police are armed too. Between 2000 and 2014, 2445 police officers died on duty compared with 25 in Britain.  In  2018 San Diego, 19% of police stops and searches were on black people despite them being only 6% of the population.

The McClesky vs Kemp Supreme Court case was what revealed this  as a problem. The case was an attempt to prove that McClesky (a black man charged with killing a white police officer) should not receive the death penalty because in Georgia, it was found an individual charged with killing a white person was 4.3 times more likely to receive death penalty than killing black person. Whilst the court acknowledged that there were racial disparities in the capital-punishment system of the state this was not enough to overturn cases on an individual basis. The consequence of this was it made it incredibly hard to challenged racial discrimination in criminal justice.

The police system is systemically racist. This is not to say all individual cops are racist but that the police and criminal justice system regularly discriminates. Resolving racial bias is difficult because it is difficult to determine exactly at what point and where results in deadly force.

Are individual cops more likely to hold George Floyd down than a white person? Is it to do with discriminatory police practices such as stopping more black people than white? Is it communities in urban poverty have statistically higher crime rates and more black people live in those communities?

Concentrated disadvantaged theory suggests a cumulation of all these factors: poverty, geography, racial bias and police tactics (black people are still stopped more by police even after controlling for an area’s crime rate). Political scientist Charles Epp suggested concentrated disadvantage connects urban poverty and inequality with racial inequality. Police adopt a more aggressive policing style in these urban poverty areas which then leads to a higher number of incidents where lethal force is used.

The Black Lives Matter movement is creating public awareness. Perhaps it also inspires motivation for political pressure and institutional reform. American policing and criminal justice requires a change culture which must acknowledge racial bias and change it. States should pass use-of-force legislation and not leave it up to the police to legislate themselves.

Police officers in the US will remain a more militant force than Europe as long as it’s citizens are armed. However it is possible to move on from various domestic policy ‘wars’; focus on restoring police-community relations and restore funding to community programmes addressing poverty and crime. This should reduce the rate at which ‘use of force’ escalates. After all, the police are not the army. If anything can be done about police-brutality that fact must be at the forefront of new reforms.