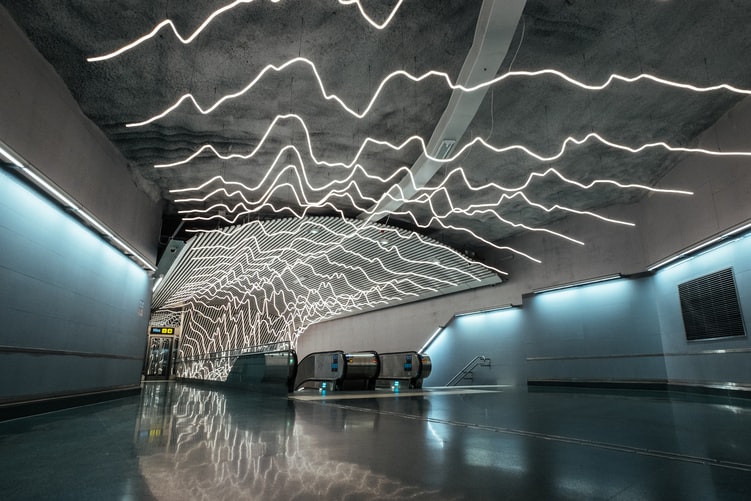 For most of us, taking a trip on the London underground is a means to an end, a quick – if slightly unpleasant – way to get around a busy city. Make a similar journey in Stockholm, however, and you will enter a new world with every station you visit. That’s because the tube network in Sweden’s capital has been designed to include space for art, and the effects are stunning.

T-Centralen Station is the city’s main central transport hub linking bus routes with underground trains. Above ground there’s a simple concourse not dissimilar to London Marylebone, but take an escalator down and you’re immersed in a work of art. At the foot of the escalator, the space opens up into an enormous underground cavern with roughly hewn rock painted bright white and blue. Enormous blue vines extend up and over archways, making the passing commuters look comparatively small. There’s no room for claustrophobia in this space, looking at the wide walls and bright colours creates the same ambience as a museum or art gallery.

Each design is unique to its station and wildly different from the last.

Opened in 1957, T-Centralen was the first Stockholm tube station to be designed in this way, but it wasn’t the last. “Visit Stockholm” have their own website celebrating fourteen of their stations that exist as functional works of art. Each has a different theme: from Solna Centrum’s fiery red background and green landscape silhouettes, to the baby blue Stadion with its wide rainbow arch, and the retro tiling at Thorildsplan illustrating pixelated videogame characters. Each design is unique to its station and wildly different from the last.

Created by different Swedish artists, each artwork tells its own unique story about Stockholm’s past, present or future. Kungsträdgården station is one of the most famous for its depiction of the historic Royal Garden that sits above it. The station is also home to local fauna and is “the only place in Northern Europe where the cave-dwelling Lessertia Dentichelis spider can be found,” according to their website.

A quick online search for more stations will turn out some incredible images of what is an astonishing concept for modern transportation.

Stockholm is a city where you can really breathe.

When I visited Stockholm in 2017, I was shocked to see such dramatic art on the underground. I was using the trains to get around the city and had never thought to encounter anything so meaningful on public transport. Part of its effect is in the amount of open space it reveals. Cavernous underground chambers ensure the network is never crowded and there’s plenty of space to move around. Above ground too, the streets are wide and the traffic slow. Stockholm is a city where you can really breathe.

I’m sure such spaces must have a positive impact on commuters’ mental health. Not being crammed into small spaces with strangers makes the journey a much more pleasant experience. And as a tourist, you never know what you’ll find when you get off at your next stop. Travelling on the Stockholm underground is fun, and a great way to see the city through the imaginations of its artists.

Sweden are creating a more welcoming, positive space for their citizens and visitors.

“Excuse me, you have to do it like this” explained a kindly voice over my shoulder as I tried, incorrectly, to swipe my travel pass on the barrier. The friendly local showed this clumsy tourist how to get through the barrier, walked me to my platform and wished me well. I’m sure that random acts of kindness like this would be much less frequent in smaller, more utilitarian spaces. Perhaps in creating such bright, open, exciting spaces in their public transport system, Sweden are creating a more welcoming, positive space for their citizens and visitors.

Functionality was obviously never the sole aim in the network’s design. It’s wonderful to think that a capital city can build effective infrastructure with art as a fundamental part of its design. A trip on Stockholm’s underground network will get you around the city quickly but it might also be an experience worth having in and of itself.