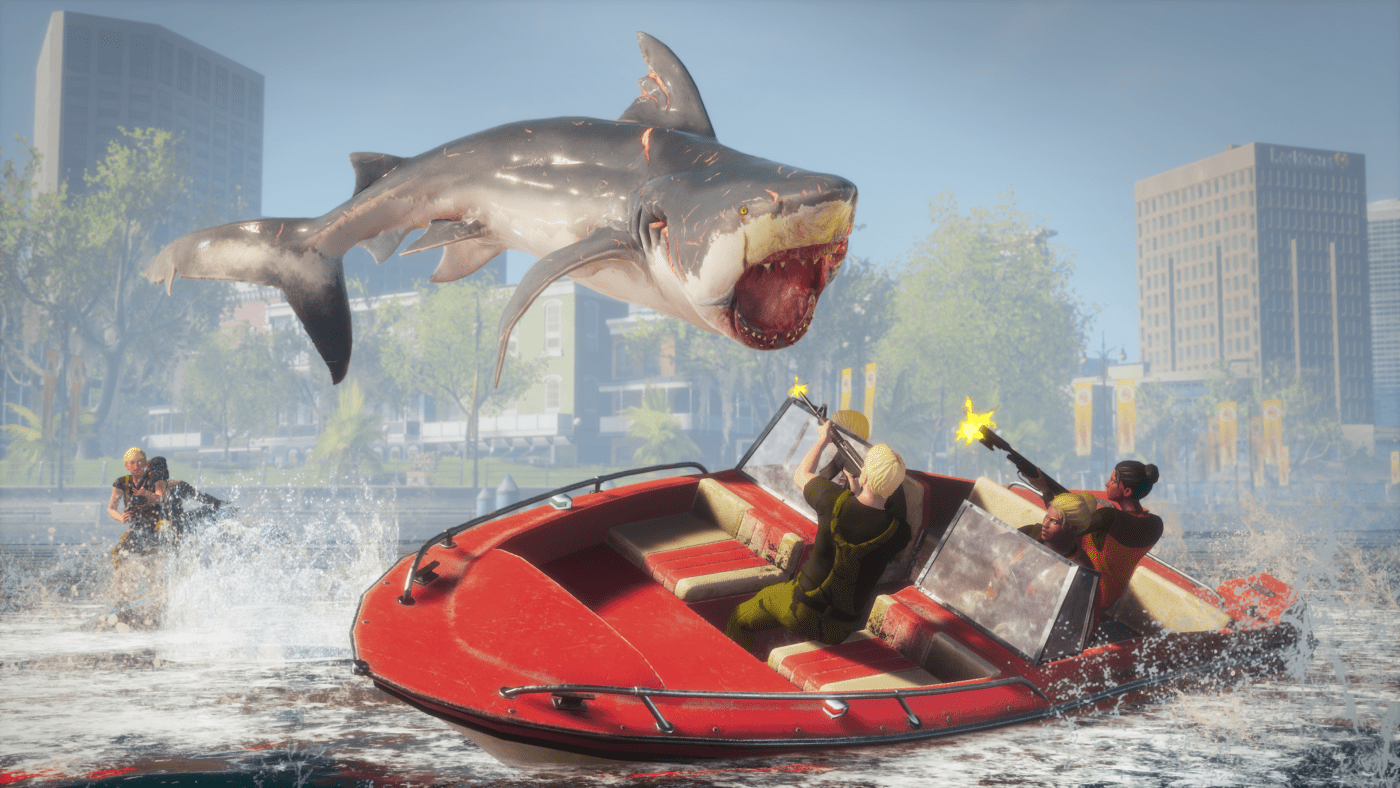 Once in a while, a game comes around with a premise that so obviously guarantees fun, you wonder why it took until now for someone to make it Maneater, an open-world title that lets you hunt and kill unsuspecting humans as a shark- is one of these games.

Maneater follows the journey of a young bull shark, cut out of her mother by a hunter called Scaly Pete who then, much like the classic hunter trope set out by Bambi, kills your mother. As you seek revenge, Scaly Pete’s story is told through documentary-style cutscenes for the fake show, ‘Maneater’, giving you an insight into his motivations, backstory, and shark-hunting plans.

Maneater leans heavily on the documentary format throughout the game, using Planet Earth-like narration to describe missions, fights, and locations you may encounter. Chris Parnell, the voice of Cyril in Archer and Jerry in Rick and Morty, does an excellent job blending the perfect amount of sarcasm, humour, and information into the narration, ensuring it never feels stale or overplayed through the ten hours it takes to complete Maneater.

Each mission that sees you progress is classed as a form of revenge, or a way of protecting the environment

As you’d expect, the gameplay really revolves around one element: biting things. For the most part, your combat experience will consist of attacking with one button, and dodging attacks with another. It’s hard to criticise this, though, as if you’re looking for an authentic shark-like experience, there aren’t many other techniques sharks use.

Maneater is split between two areas: under and above water. While many of the trailers emphasised the carnage you can cause on dry land, I found the underwater aspects of the game to be where most of the interesting combat happens. There are two types of creatures you encounter underwater: passive and hostile enemies. Passive fish such as catfish and groupers are pretty easily killed, and are a great source of health and XP, whereas those that are hostile are often stronger, bulkier foes that will actively attack you. Before buying Maneater, I didn’t expect to enjoy these fights so much, but engaging in intense battles with groups of alligators, orcas, and hammerheads is pure, unadulterated bliss, and I never got tired of devouring these predators, even when you reach a higher level and can pretty much destroy anything in your path.

By eating enemies, you gain a different type of protein that acts almost as a currency to upgrade your abilities and evolutions. While each of these upgrades adds some cool aesthetics to your shark (especially the Bone Set), I felt there could have been more focus on building a certain class of shark. Given how willing the game is to give you proteins, you will have more than enough to upgrade every ability to maximum just by playing the game normally, taking away some of the more strategic elements that come with normal upgrade systems.

In a game called Maneater, the main appeal to many will be the chance to eat humans, and the game does not disappoint. Compared to the underwater foes, humans are easy to kill, taking just a few bites before they end up as fish food. While they don’t offer much in terms of proteins or XP, the shark attack animations, especially the finishing moves on helpless civilians swimming in the sea, are incredibly satisfying to pull off.

As you’d expect, the gameplay really revolves around one element: biting things

Once you’ve eaten a decent amount of humans, hunters are deployed to come put an end to your reign of terror. These are much harder targets to kill, as they have the protection of boats while trying to harpoon you. While mindlessly eating an endless supply of hunters remained fun, I couldn’t help but feel that a better variety of these hunters was needed, as reinforcements don’t extrapolate the conflict that much. It might have worked if Deep Silver had implemented a scaled-threat system, much like that found in other open-world games such as Grand Theft Auto and Saints Row, where harder enemies such as helicopter or submarine hunters would track you down.

Feel guilty about killing a bunch of humans? Well Maneater does well in justifying your rampage. Each mission that sees you progress is classed as a form of revenge, or a way of protecting the environment. The citizens of Port Clovis are rampant polluters, responsible for damaging the ocean ecosystem, and whether you’re targeting civilians, mafia bosses, or fishermen, every mission reflects this. Throughout the game, Maneater subtly makes a statement about the damage humans cause to ocean life, perhaps therefore being one of the most impactful titles for improving the environment without resorting to the preaching and pandering that many gamers take problems with.

While many of the trailers emphasised the carnage you can cause on dry land, I found the underwater aspects of the game to be where most of the interesting combat happens.

Maneater isn’t without its issues, however. I experienced some pretty heavy framerate and resolution drops when entering new or civilian-heavy areas of the map: not surprising given the depth of the map. Much of the endgame content focuses on finding all the collectibles, the best of which are the underwater points of interests. As these add nothing more than a new set of upgrades and you will probably have maxed out your shark to level 30, there is little incentive to continue playing after the main story is over. Hopefully, future DLC may tap into the huge potential for further exploration away from Port Clovis to take on unfamiliar creatures in the ocean’s depth.

Overall, it’s hard not to give praise to Maneater. In a genre of GTA clones and faux exploration, it’s refreshing to play a game that’s not afraid to do its own thing. If you’re in need of a cathartic gaming experience to let out your well justified anger at the world right now, Maneater is the game for you.