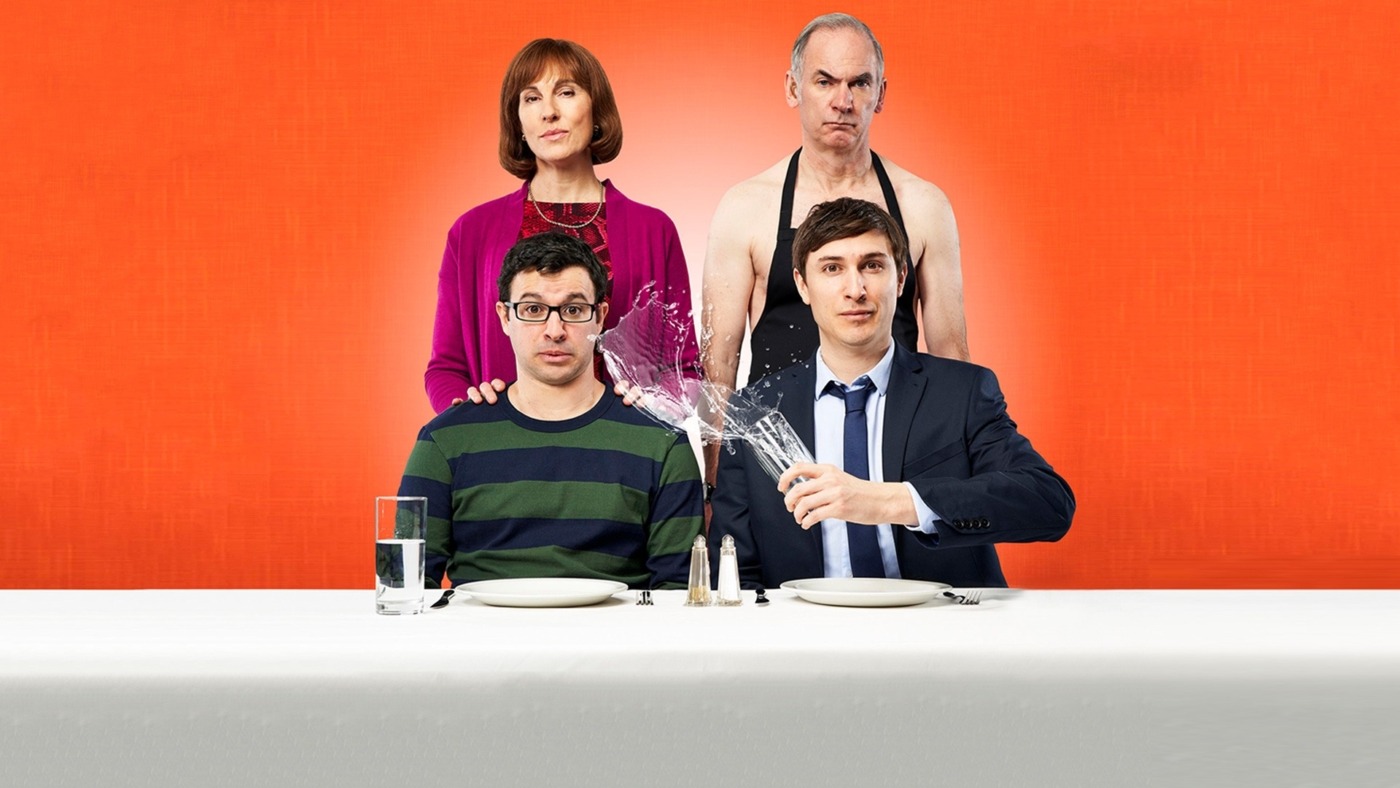 The sixth series of Friday Night Dinner commenced on Channel 4 at the end of March and fans prepared themselves for another short but sweet viewing of the Goodman family and their slapstick chaos. As keen as fans were to binge through the six episodes, they were forced to wait out each week and watch the show every Friday night for six weeks. It’s almost as if we’re secretly spectating the Friday festivities as they fail miserably, how wonderful.

Friday Night Dinner is supposed to be exactly what its title suggests. Jonny (Tom Rosenthal) and Adam (Simon Bird) return to their family home every Friday night to fulfil the Jewish tradition of having a meal as a family with their parents Martin (Paul Ritter) and Jackie (Tamsin Greig). Conventionally, this time is meant to enable a transition from every day, hectic working lives to a spiritual, relaxing bit of family time. However, in the Goodman household, it is anything but.

It’s almost as if we’re secretly spectating the Friday festivities as they fail miserably, how wonderful

And this series proved to be no different. As soon as the first episode began and the boys parked in the driveway, irritating one another as they usually are, it was hard to ignore the dilapidated caravan situated right outside the house. But this was just a minor warning sign for the bizarre activities that were to occur within the Goodman family over the following episodes.

Credit must be given to the writer Robert Popper – who created and cast the show based on his own experience of Friday night dinners – for keeping the original storylines coming. He creates such quirky characters by essentially giving them personality traits on steroids, which are so inflated that at different points every character seems mad. For instance, Martin’s obsession with things that one would usually bat an eye at causes him to appear mildly insane. Not all dads would spend a whole evening constructing a “rake-broom-device-thingy” to get a plastic bag down from a tree, or spend their birthday depressed after choosing to “calculate” their age of death.

True, many of the storylines are predictable once we realise the nature of the strange characters and the strange predicament they are in, but this takes nothing away from the satisfaction and fun we derive and cherish as viewers. Such as when Jim (Mark Heap), the inquisitive (and sometimes intrusive) neighbour, delivered an extra-large steel dog cage to the Goodman’s house so that he didn’t startle his new dog, Milson. We all just knew someone would end up stuck in it, but it’s the series of amusing events that leads up to the anticipated moment which is so entertaining to fans of the show.

Popper creates such quirky characters by essentially giving them personality traits on steroids, which are so inflated that at different points every character seems mad

We also met Gibby, the boys’ Au Pair from when they were younger, who returns out of the blue to visit. Watching the boys try to remember who on earth this odd woman is without offending her was a cringeworthy pleasure. Her peculiar desire for cream teas and her extremely frequent need to use the “facilities” made me almost consider whether she’s the strangest guest character we’ve seen. But then I remembered the blind piano fixer who relentlessly utters sarcastic remarks, and nice Grandma’s horrible 85-year-old boyfriend Mr Morris, and so I thought perhaps not.

The final episode had everything. The “females” (Martin’s name for the boys’ girlfriends) finally made an appearance, much to the delight of Jackie, who had been preparing for the moment for years. This episode in particular really shone a light on the expertise of the cast who all contribute to creating a down-to-earth experience of girlfriends meeting parents. Mum’s overly-excited and trying to make everything perfect; dad’s appearing his awkward self, despite his best efforts to be normal; boys pleading that the parents don’t embarrass them. Sound familiar?

Series six gave us yet another emotional and shocking end to the finale, but in a much happier tone in comparison to last series (R.I.P. Wilson). However, it gave some fans a bitter-sweet message. I won’t spoil the ending to those who haven’t seen it yet, but is this the happily ever after? Of course, I think the show still has so much left to offer; after all, most episodes are focused on some trivial thing that’s blown out of proportion, such as a tin of meat from 1996 (which hospitalised the determined-to-eat-it Martin) or Adam’s violin (which everyone urged him to play but constantly interrupted him during his attempts to do so). The ideas for these are surely endless.

But when thinking about the practicalities and requirements surrounding the potential of a seventh series (considering the final episode’s surprise), and coming to terms with the fact the show started over nine years ago, I realise that the six series have already given us so much to enjoy. So, to the Goodman family, Jim, and the rest of the motley crew: shalom!