I don’t suppose anybody reading this has ever heard of a children’s cartoon called The Amazing World of Gumball? It’s an absurd, silly little show about a talking cat and magical fish, or something to that effect. As you can probably guess, a twenty-something year old university student is probably not the target audience for this show. I’m talking about it because of a rather strange clip that I stumbled across on my YouTube newsfeed. I’m not quite sure how it got there, but there it was. It’s a clip that features the series protagonist, Gumball— the aforementioned blue cat— telling a sentient cactus to “check her privilege”, before proudly asserting that he has “studied the martial ways of the social justice warrior”. This is a show intended for children, throwing out superficial slogans from the online ‘culture wars’.

Actually, I don’t like the term ‘culture war’. The petty Twitter quarrels and dumpster fires of YouTube drama should not be dignified as a ‘war’. Still, petty and pathetic as the online domain might be, it is full of people, from the Left, Right, and Centre of politics, who hold a variety of sincere beliefs. Social Justice Warrior (or SJW for short) is an old pejorative that seems to have seeped from the barracks of online political spats and infiltrated mainstream discourse.

This is a show intended for children, throwing out superficial slogans from the online culture wars

Ignoring my discomfort with such gutter political insults being used in a show intended for children, the real misconduct here is the superficial and exploitative use of the expression. People who hold sincere political beliefs don’t need a children’s television channel mocking them in this way, at least in my opinion. It just doesn’t sit right with me. It would be like if SpongeBob started calling Mr Krabs a conservatard, or the Beast Boy from Teen Titans coming out to Robin as an otherkin before being berated for this lifestyle by the gang of superheroes. It reeks too much of commodification, of out of touch corporate suits dipping their fingers in the online zeitgeist and pulling out catchy terms in an attempt to portray their show as both relevant and… ahem…edgy. Where is Daria Morgendorffer when you need her? Interesting that they selected a pejorative, isn’t it?

I don’t want to accuse The Amazing World of Gumball of being some sort of stronghold for the online right-wing. This show has also talked about the glass ceiling and even featured an antagonist that bears a very striking resemblance to Donald Trump. Again, it’s all very superficial and clearly intended to rile up audiences and give their show some of that lovely corporate edge.

Once again, the sincere political beliefs of ordinary men and women are commodified by moneyed interests

And this show is just the tip of the iceberg. Do you remember the big hullaballoo that emerged following the 2019 Gillette commercial, The Best Men Can Be? Good lord, do I remember. The online political sphere wouldn’t shut up about the damn thing. To be honest, the message of the advert didn’t bother me. What bothered me was the effortless manner with which a corporation was able to latch onto shifts in the tectonic plates of our culture, such as the MeToo movement, all for the sake of selling bloody shaving razors.

Once again, the sincere political beliefs of ordinary men and women are commodified by moneyed interests. Am I the only one that sees this as problematic? Actually, I have several better words than problematic: cynical, manipulative, tiresome, nauseating…you get the point.

The culture wars have been utterly commodified by our corporate masters and, the strange thing is, people don’t really seem to mind. If anything, they seem to be strangely on board. People clap like seals whenever giant corporate entities with far too much political influence use these buzzwords, provided they at least appear to support their own particular ideology. 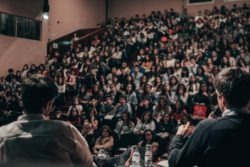