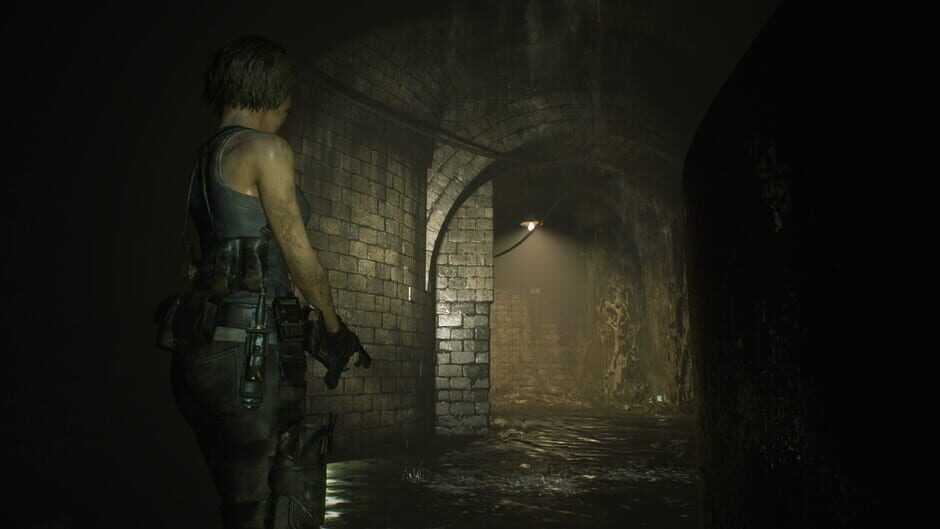 Resident Evil games have never been about their length, particularly the early titles, which often featured only one primary location and the occasional strange detour to keep the game interesting. They were designed mainly around backtracking, and RE3, the last of its kind in many ways, functions similarly.

While the short campaign is no issue – especially if you play periodically like me over the course of a week or two – RE3 is a game that takes its time to get going: and even when it does, it feels a little hollow. This is common for Resident Evil games, so it’s far from a glaring problem, and nor was I expecting anything else, but if you’re a new player hoping to find a game as engaging as The Last of Us, be warned. It might be fun, but Resident Evil is an Action-Horror B-Movie. It always has been, and it always will be.

The closest the series has ever come to that feeling of a complete and coherent story is Resident Evil 7, but RE3 still delivers on the action and horror beyond a satisfactory level. The game is made in the details – such as how radio conversations are timed to last the length you take to walk up a staircase to the next area – and it is exactly these moments that not only give the game its own rhythmic breath, but also leave no moment uninteresting, even traversal time.

Just because the game is short and in some ways a little hollow, that doesn’t mean the pacing is bad. In fact, I’d argue that it is one of the series’ greatest strengths. Because the game has the quality of never feeling like it has started, it achieves a sense of unpredictability and urgency. A particular moment that comes to mind is when you have to turn on four power supplies in an underground area by the subway station. What makes this section so effective is that it is not too complicated in neither layout nor objective, and yet because of the sudden terrors, it becomes a labyrinth of confusion and fear.

It only takes one death and a retry of the situation to discover that if you use your limited resources well, some simple, smart, and frankly easy strategies will be enough to defeat the enemies

That said, some moments stick out for less honourable reasons. For example, a chase scene that involves fire and scaffolding (avoiding spoilers) felt extremely incongruous: not because the actual chase itself was out of place, but because it cut up gameplay with short, admittedly well-blended cutscenes that were not nearly invigorating enough to justify disturbing the tension.

However, the enemies in the game are masterfully designed. Each one – with the exception of typical zombies – is expertly introduced to such an extent that when you first meet them, the fear, combined with the awkwardness of not knowing how to fight them, overwhelms you with a feeling of utter powerlessness, making these moments of horror extremely effective and impactful. However, it only takes one death and a retry of the situation to discover that if you use your limited resources well, some simple, smart, and frankly easy strategies will be enough to defeat the enemies.

The remake also features a new online mode: one that is well-received, given the general lack of multiplayer modes in these titles. This was no problem for Resident Evil 7 and its expansive DLC, but was certainly amiss in Resident Evil 2, and so I’m glad to see something that improves the replayability of the title. Concept-wise, I was excited to hear it was a 1-v-4 mode, envisioning what could essentially be Dead By Daylight with Resident Evil characters. Unfortunately, the multiplayer itself ended up over-complicating things by adding all these additional elements, and forcing some kind of “umbrella plot” that felt out of place.

Overall, despite my issues with some aspects of RE3, this remake is well worth your time. The value of the game is certainly increased when you play it immediately after Resident Evil 2, as both are set in the same time frame. Moments in this game are given depth by existing knowledge of what happens in RE2, and likewise little details about that game are given a backstory in the third iteration. Resident Evil 3 plays well and maintains strong survival horror elements, all the while delivering a compelling instalment in the Resident Evil saga.

Gallery image with caption: Fallout from The Last of Us leaks