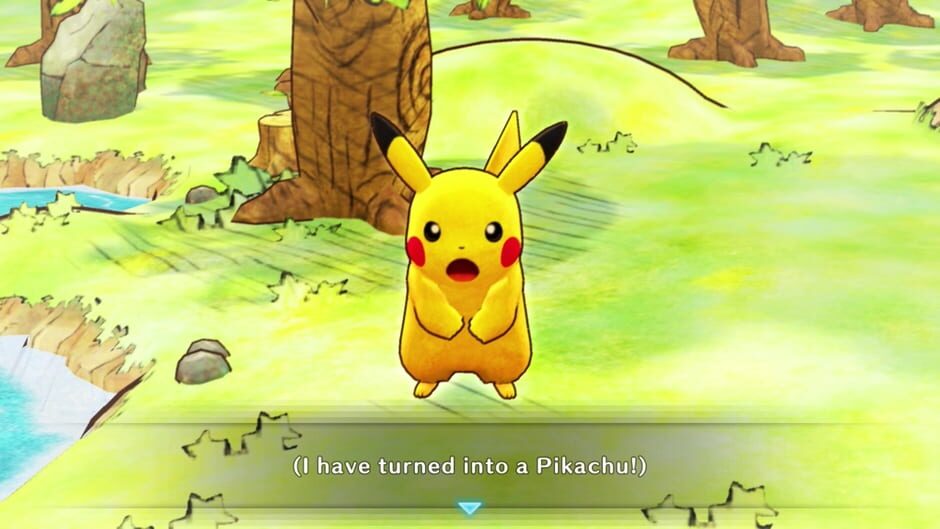 There’s a blue sky, and a Pelipper flies across the screen, all to the opening theme of adventure. When I returned to play the remake of one of my favourite games I hoped to be struck by the same emotion. Pokémon Mystery Dungeon: Rescue Team DX delivered.

As I powered up the Switch I was instantly struck by the presentation. It was perfect; the nostalgia washed over me as I heard that iconic tune and witnessed the familiar setting of Pokémon Square. Everything is as beautiful as I remember, but with a modern art-style that still captures the character of the original. The setting feels fantastical but real, the portraits modern but stylish and even the items have unique illustrations! Every detail of the presentation is tempered to Rescue Team perfection.

I started the game with the familiar presentation of the personality quiz, deciding which Pokémon you play as. As expected, I did not get the same result as when I was a lot younger (I’ve grown up a lot apparently because I got Sassy instead of Timid). Luckily, the extra feature that lets you choose your character instead allowed me to build my original team of a Cyndaquil hero and Totodile partner. This is a feature that first appeared in Gates to Infinity, a game Rescue Team DX makes a habit of borrowing from.

Everything is as beautiful as I remember, but with a modern art-style that still captures the character of the original

Thankfully, it takes only the best features from these older titles, benefitting from a wider pool of items, a movement system that is no longer inherently broken, and a better stat system. While I did miss the busted trick that was keeping Smokescreen on Cyndaquil for the entire game, this was a needed balance decision.

The updates to the game also include adapting a speed stat, which prevents moves like Agility ruining your runs and instead allows you a chance to strike twice in one turn. Additionally, the starters come with egg moves, which meant that Cyndaquil came with a handy Double Kick and Totodile came with Metal Claw and Ice Fang, providing great utility to help players through early dungeons. Despite these neat additions, the game never feels too easy. The enemies – especially the bosses – still hit hard and will punish you if you don’t pay enough attention. Do not run out of apples.

The other thing to address is the 3D model system. I’m generally in the camp that prefers sprites over 3D models, and for the main Pokémon games, I’d replace the current 3D models with sprites in a heartbeat. However, Rescue Team DX has even got me loving the models. Each model has a textured complexion matching that of the illustration style, and the animations are quite frankly charming. I’ll never get tired of Cyndaquil’s flames accompanying bursts of surprise or the Legendary Bird Trio’s dramatic T-Pose. These improvements have given the animation team more to work with in terms of cutscenes and let me be the one to tell you, it doesn’t get much better than seeing yourself as a Cyndaquil mid-jump-punching towards an Alakazam.

My journey began with the aptly-named Rescue Team Blue (see what I did there?) of a Cyndaquil and Totodile about to become involved in events threatening the balance of the world. The story itself remains fantastic; the fugitive sequence which forces you and your partner to journey vast distances to clear your name remains memorable and exciting, even if Mt. Blaze keeps its original difficulty spike (many a defeat happened here).

All things considered, if we get a PMD Explorers DX remake of this quality, I might cry

The storytelling is charming and full of life, with characters that are arguably more interesting than those from the mainline games. At the writing of this review I’ve completed the main story, but what you need to understand about Mystery Dungeon games is that they have a fantastic post-game. In the original, after beating the big boss of the story, you could access dungeons that would let you fight even more, and these dungeons even headed right to the limit at 99 floors. Effectively, you could battle every Gen 1-3 legendary as a boss. The same is available in Rescue Team, accompanied by some fantastic animations and visuals. If you’re looking for content, Rescue Team DX has it and then some!

All things considered, if we get a PMD Explorers DX remake of this quality, I might cry. If you are someone who played the original Red or Blue Rescue Team then you’ll be in for a truly nostalgic retelling. Even if you have not experienced the original game, it’s a fantastic time and frankly this would be the better of the two to play. Rescue Team DX is a brilliant remake that is worth picking up if you’re interested.