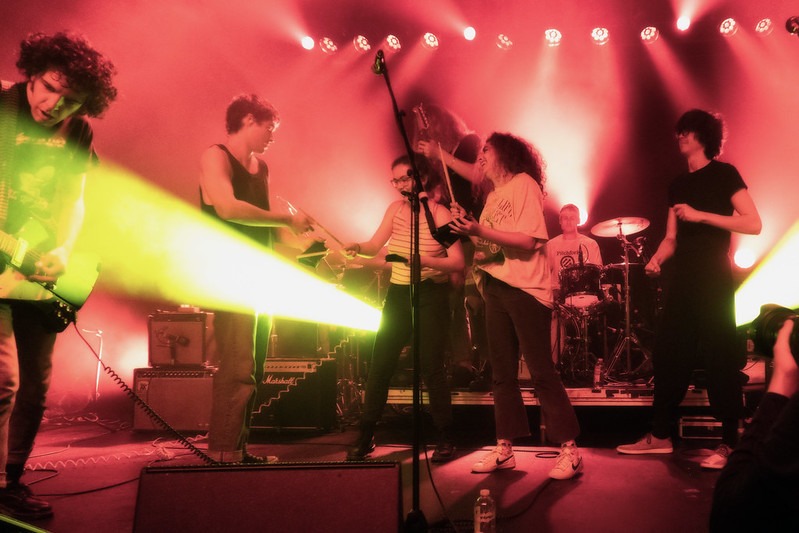 By Dara Hughes
May 8, 2020
Posted in Album Review, Music
Rating:

Indie band goes electronic: it’s a tale as old as time, and while the inclusion of electronic elements is nothing new for Car Seat Headrest, Making A Door Less Open pushes that theme further than ever before. The whole album is undercut by thumping synth basslines and clapping drum machine snares, exemplified by the opening track ‘Weightlifters’, which doesn’t introduce a guitar until two and a half minutes in, led instead by a screaming saw lead that shifts pitch like a banshee’s wail.

This lead definitely captures your attention but gets a bit too close to becoming overwhelming – especially when paired with the maelstrom of instruments that appear in the later verses. ‘Weightlifters’ chorus is pretty catchy but only noticeable because of the paring back of layers that happens in these sections: the verses become lost under the layers of cacophonous instrumentation, taking several listens to even register half of the lyrics.

The second track, ‘Can’t Cool Me Down’ takes the opposite approach. It builds off its groovy bassline, erratic drum samples and chirping electric piano. The song takes the same minimalist approach to lyrics, which is somewhat to its detriment: the repetition gets grating towards the end, being at its best in the only verse section which provides a nice crescendo.

‘Deadlines (Hostile)’ sounds more like classic Car Seat Headrest in its fuzzy guitars and rock and roll drumming, but lacks the bounce or crushing sadness that make their songs so appealing. It picks up in the middle but fails to go anywhere particularly interesting with its final minutes. This lack of tight structure and overblown feeling that haunts many of the songs is surprising considering lead Toledo’s record of eight-plus minute songs that never get boring, and yet some of the four-minute cuts from this album somehow managed to drag.

‘Hollywood’ is the song that demonstrates that the Toledo era of Car Seat Headrest is over: the project is truly a band now, for better or worse. Here it seems to be for the worse, however. Percussionist Andrew Katz takes the lead vocally on the track, and though his energy is refreshing, it’s directly at odds with the soulful and melancholic voice of Toledo. His hyper rhythmic delivery provides little variation over a fairly by-the-numbers rock instrumental.

‘Hymn – Remix’ is completely unique in the CSH discography, sounding more like a breakbeat EDM track for the majority of its runtime rather than the band’s typical indie ballads. The song is pretty impressively executed, the guitar intrusions are paired well with the synthesisers, vocal samples are scattered in an engaging way, and it lasts just the right amount of time, though the drumbeat makes the song sound as though it belongs in a Matrix film.

Experimentation with a new sound isn’t for nought

‘Martin’ is the most lyrically focused song on the album: none of the lyricism contains the ironic bitterness that usually occupies their tracks, however, instead of manifesting as a relatively run of the mill indie love song. The instrumentation on the song is passable, the tripping drums keeping the song at pace, but the acoustic guitar does little to elevate the song, and the garbled and chipmunked vocals that close the track are a purely bizarre addition.

‘Deadlines (Thoughtful)’ takes an MGMT style approach with a steady pumping beat accompanying every moment of the song. Despite its somewhat familiar sound, it ends up being one of the album’s highlights, the downtrodden lyrics and delivery provide a nice contrast to the driving instrumentation, though the “shut up” adlibs in the outro feel a little cartoonish. It is definitely the largest diversion from the band’s signature sound, yet proves that experimentation with a new sound isn’t for nought.

‘What’s With You Lately’ is another intrusion by a band member, this time guitarist Ethan Ives, and once again fails to match up to the high bar set by Will Toledo. The song’s bare instrumentation is somewhat refreshing, but the four-chord formation feels old hat, and it suffers, strangely considering the band’s history, from not sounding lo-fi enough.

‘Life Worth Missing’ is just that: on each listen I barely noticed it come and go. It’s last-minute is relatively ear-catching, but in general, it lacks any distinguishing features and is greatly outshone by its successor: ‘There Must be More than Blood’ is the most well-constructed song on the album. It earns its seven-minute run time by value of its excellent production, catchy chorus and forlorn verses. Its ethereal synthesisers are reminiscent of Death Grips’ underappreciated track ‘Artificial Death in the West’, over which Toledo delivers a classic Car Seat Headrest ballad performance.

A change in sound by no means guarantees a downturn in quality, and certain tracks prove it to be possible when the right balance is struck

Closing track ‘Famous’ isn’t quite as strong as the one that precedes it, but is a well-curated collage of bizarre sounds and the repeated garbled vocal sample, playing at various pitches, speeds and volumes throughout the track. Its short runtime is probably the only instance of being left wanting more but is definitely preferable to the alternative.

Making A Door Less Open follows a pattern of ups and downs, notably lacking in the core sound that made Car Seat Headrest’s two previous projects so engaging. A change in sound by no means guarantees a downturn in quality, and certain tracks prove it to be possible when the right balance is struck, but overblown songs and an inconsistent and confusing style prevent the album from realising its full potential.