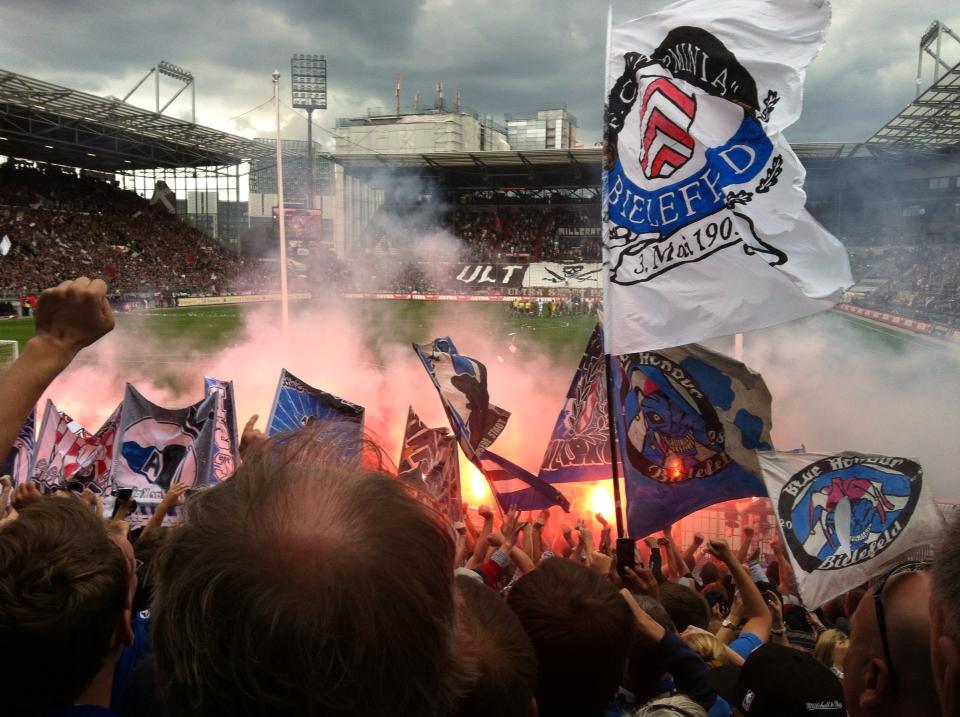 Arminia Bielefeld moved one step closer to promotion to the Bundesliga after beating Holstein Kiel 2-1 courtesy of goals from Jonathan Clauss and second half substitute Sven Schipplock. Arminia’s late winner extended their lead at the top of 2. Bundesliga to eight points, inching Uwe Neuhaus’ side ever-closer to an unlikely return to the top-flight.

It was the perfect start for Neuhaus’ travelling side, taking the lead after just 22 minutes of play as a result of brilliant footwork from the 2. Bundesliga’s top-scorer, Fabian Klos. With the hosts retreating into their own half, Stefan Ortega, who was impressive in goal once again for the visitors, sent a lofting pass into the final third towards Klos.

The German forward controlled neatly on the edge of the penalty area, before sliding a perfectly weighted pass towards the onrushing and unmarked Clauss. The French midfielder did not hesitate: wheeling away jubilantly once his low strike had rippled in the back of net. Clauss’ opening strike was just desert for Neuhaus’ side: Arminia were excellent in the first half.

Just fifteen minutes before breaking the deadlock, another long pass from Ortega to Klos wreaked havoc among the Holstein Kiel defence. Klos’ movement off the ball was vital to his side’s progression up the pitch, unsettling the hosts’ defence while his teammates built attacks in the midfield. Klos has never played in the Bundesliga; he has more than earned his chance to play in the top-flight.

Steffen Schneekloth could only watch on through his fingers as his side missed a gilt-edged opportunity to get on the scoresheet on the cusp of half-time. A smart piece of movement from David Atanaga on the left flank created enough space for the Ghanaian winger to fire a driven cross through the penalty area. Unfortunately for the hosts, Alexander Mühling was unable to redirect the ball beyond Ortega.

After the interval Kiel continued to grow into the contest, equalising just six minutes into the second half. Fabian Reese, who was only introduced at the start of the second period, made an immediate impact by providing the assist to Mühling’s equaliser. Reese’s looping cross was inviting for Mühling, who leapt highest to fire a well-placed header beyond the grasp of Ortega.

It must be said, both ‘keepers were impressive throughout

The game soon erupted. Within minutes of Kiel’s equaliser both sides went close to scoring their second goals of the afternoon. Arminia centre back, Amos Pieper stung the hands of Ioannis Gelios with a speculative effort from long-range, while an audacious half-volley rattled Ortega’s woodwork just moments later. It must be said, both ‘keepers were impressive throughout.

A second flurry of goalmouth activity followed on 68 minutes. Lee Jae-sung was within inches of giving the hosts a famous lead, only to hammer his shot against the crossbar from within the six-yard box. It was huge let-off for the visitors, who would come to rue their missed opportunities in injury time.

Sven Schipplock was the hero in the dying embers for Arminia

With Kiel on top for much of the second half, the match seemed to be petering-out towards a draw in the final exchanges: Arminia certainly weren’t in the ascendency. There was, however, time for one final twist with just 90 seconds left to play. Second half substitute, Sven Schipplock was the hero in the dying embers, sending Arminia one step closer to promotion by firing a header beyond Gelios’ reach.

Arminia Bielefeld have changed divisions 15 times in the past 24 years. If Neuhaus’ side continue to grind-out vital results: Arminia will make their first appearance in the Bundesliga since 2009 next season. Stuttgart and Hamburg are in action tomorrow; Arminia’s lead at the top of the standings is – at least for now – extended to eight points. With each passing week, promotion feels increasingly likely for Arminia.