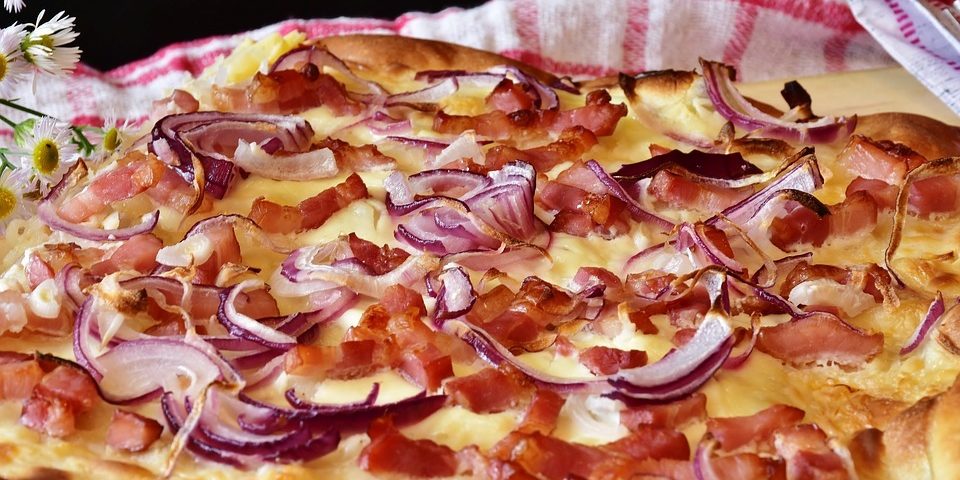 Alsace is unlike any other French region, tucked away in the corner of North-eastern France. It is a region shaped by its proximity and history with its bordering country Germany. Alsace has been left in a cultural limbo of not quite being French or German. Its cuisine is no different.

I visited Strasbourg, the capital of Alsace, at the end of February while on my year abroad in France. I lived in the neighbouring region of Lorraine and as a massive foodie, an Alsatian trip brought with it the excitement of what regional foods I could try. On that cold February day, we ate at a little restaurant called Le Baeckeoffe d’Alsace. This is where we found Flammekueche, or tarte flambée in French.

Literally translated as “flame cake”, this historical dish is composed of dough which is rolled out very thin. It is topped with crème fraiche, thinly sliced onions, and lardons, which I found to be quite a delicious combination. The thing I like about Flammekueche is it that it is not too heavy and filling when you eat it as the base is so thin. Pizza can sometimes feel a little too cheesy (if there is such thing) and a little too greasy, especially in the UK, yet Flammekueche gets the perfect balance of being a light yet fulfilling comfort food!

Flammekueche was traditionally made by German farmers and was used to test the temperature of their ovens before baking bread. They seemingly got bored of eating plain dough and added some toppings. However, these toppings feel more French with the crème fraiche and lardons. As with many regional dishes you can also find variations of Flammekueche, such as Munster, which includes French Munster cheese as another topping; staying loyal to my degree in French, I personally opted for this cheesier version.

I anticipated this meal to be tasty; I would expect anything that has resemblance to pizza to be delicious. In Strasbourg we ordered a variety of different types, including a vegetarian version which swapped out the lardons for mushrooms and sauerkraut, which itself is another Alsatian speciality.

The history and variations that Flammekueche has to offer come as no surprise when we consider the turbulent Franco-German history of Alsace. As a history student, I could write about it all day but to sum it up. It involves the region being giving up to Germany in 1871 and 1940, and then given back to France in 1919 and 1945. Just as Alsace has, Flammekueche has experienced life on both sides of the border which brings us to the delightful dish it is today.

We paired our Flammekueche with a pint of local beer from the Fischer brewery in Strasbourg, although it could also be enjoyed with a glass of local wine such as Riesling, something we would have a few too many of later on that evening. Flammekueche was a new dish for all of us dining but it went down a storm and kept us fuelled for a busy day exploring Strasbourg.

Regional food is so important in keeping traditions alive and giving us a sneak peek at a region’s history. This dish really brings together both sides of the Franco-German border and gives us a glimpse into the complicated yet fascinating history that Alsace has to offer. If you ever find yourself in Alsace or the city of Strasbourg, I would definitely recommend that you give this regional gem a try.