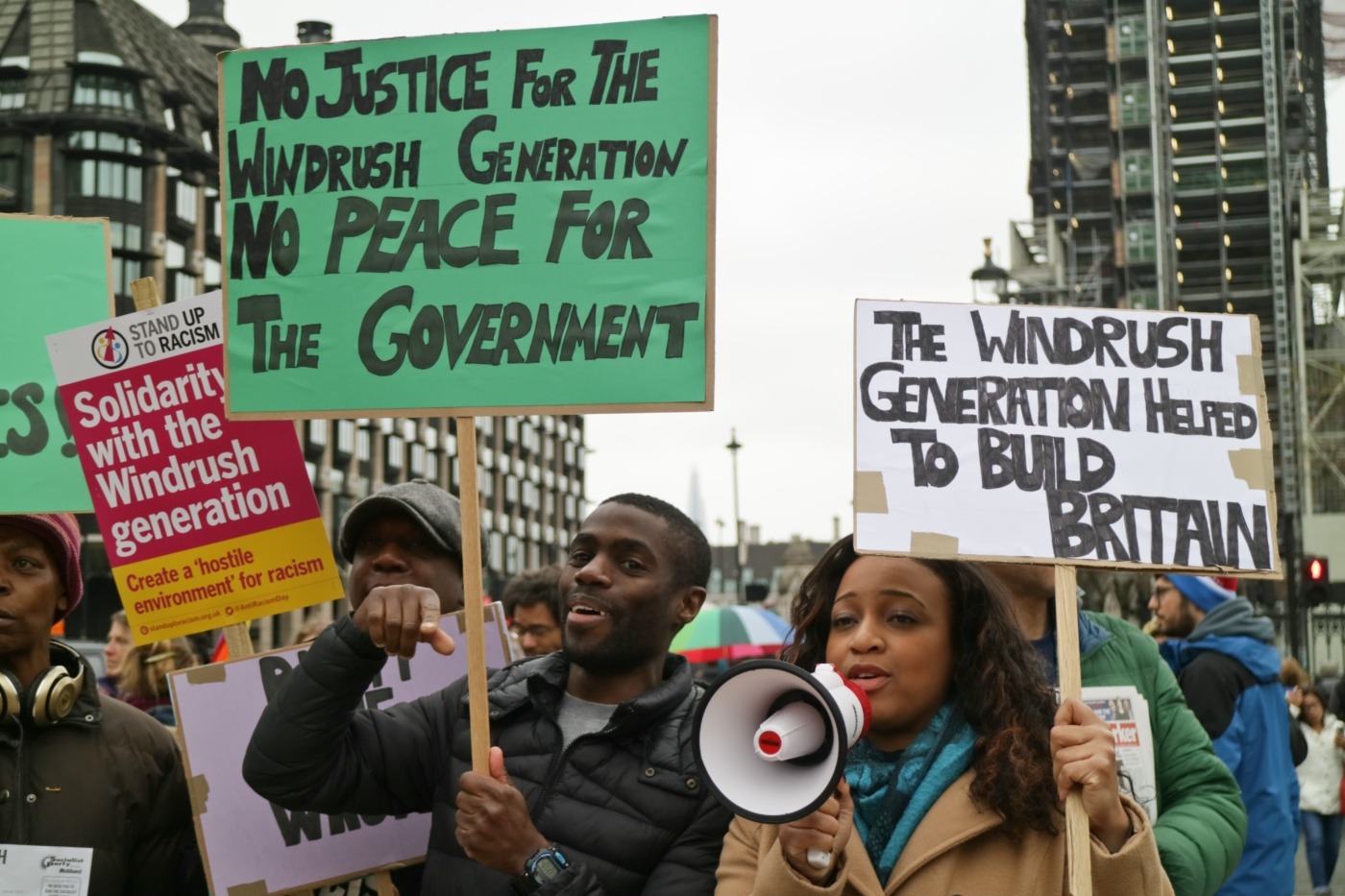 “They made me feel like I’m not British” said Sarah O’Connor, a victim of the humiliating policies that culminated what we refer to today as the Windrush Scandal. Though she had lived in the UK for more than 50 years, at the age of 56 she was told that her identity was a fallacy – that she was “illegal” in the country she understood to be home. A year later Sarah died. She spent the final year of her life fighting for what was hers; citizenship, the right to stay in the country she had called her home. In July 2018 when Sarah was finally formally recognised as British, the moment was bitter-sweet – while she was relieved, Sarah’s daughter says her mother “felt she should have always had it”.

Sarah’s experience is only a glimpse of the distress and degradation felt by those who were affected by the recent immigration legislation. In the aftermath of the Second World War hundreds of thousands of people, left the Caribbean for Britain, a country bridled with severe labour shortages. The British Nationality Act of 1948, which gave citizens of the Empire status and the right to settle and work in the UK, was specifically designed to galvanise such a mass movement to the metropole.  Thus, the denial of their status, years later, can only be described as a harrowing betrayal.

The breaking of the Windrush scandal was a seismic moment in British politics. Deeply divided on the issue of Brexit, the nation came together to rebuke the government’s “hostile environment” policy that had turned the lives of so many Black British people upside down overnight. The widespread criticism of the government suggested that there was a large, national appetite for justice that could not be satisfied with just hollow words and vain actions. However, once the government’s PR machine began working, the “hostile environment” looked safer than ever.

The breaking of the Windrush Scandal turned the lives of so many Black British people upside down overnight.

By removing the clause that affected the Windrush generation, scapegoating the then Home Secretary Amber Rudd and establishing a timid system of compensation, the government subdued national outrage at the scandal, without even acknowledging the structural issues that allowed this inhumane practice to begin.

“Hostile environment” captures the government’s immigration policy. The author Maya Goodfellow notes in her book Hostile Environments: How Immigrants Become Scapegoats, that when the Coalition devised this policy, they “didn’t even attempt to hide its cruelty [instead] they flaunted it”. For this reason, their immigration policy is distinct from other areas of government policy, where they usually attempt to conceal potential malice. For example, they announced the ‘spare room subsidy’ not the daunting ‘bedroom tax’. With their immigration policy, however, Theresa May and the government were unapologetic about their immediate intent to dehumanise immigrants, or people perceived as such, as we saw in the Windrush Scandal.

Theresa May and the government were unapologetic about their immediate intent to dehumanise immigrants.

When 18 year old Stephen Lawrence was murdered by a gang of white youths while waiting for the bus in 1993, and Macpherson published the damning assessment of the police, describing it as “institutionally racist”, it was believed Britain had reached a watershed moment in race relations. However, the treatment of the Windrush generation shows lessons have not been learned. The Windrush Lessons Learned Review – an independent report looking at the causes of the scandal – charged the Home Office with a similar institutional failure to understand race and racism, and the intricate relationship between race and immigration.

The Windrush Lessons Learned Review charged the Home Office with an institutional failure to understand race and racism, and the intricate relationship between race and immigration.

It is clear that the “hostile environment” was not devised in a vacuum. “At its core the nation’s history of immigration legislation is a history of racism” says Maya Goodfellow. The narrative that post-war migrants were all welcomed with open arms, neglects the struggles of the people of colour who, unlike their white counterparts, wrestled with great political hostility.

In the immediate aftermath of the initial influx consecutive Labour and Conservative governments made concerted efforts to limit the number of people of colour entering Britain, while ignoring the large number of Irish people migrating to Britain. Moreover, a comprehensive understanding of the contemporary immigration policy can only be grounded in an understanding of years of exclusionary politics and Britain’s complicated relationship with race.

Hence, in 2013 when the Home Office sent advertising vans with the slogans “Go Home or Face Arrest” were sent to areas with high proportions of ethnic minorities, MP Yvette Cooper compared the slogans on the vans to those used by the National Front in the 1970s. Hostile environment, therefore, is not a turning point in the UK’s substantive immigration policy – but a continuation of Britain’s traditional approach to race and migration.

Moreover, Windrush is not just a tale of an arbitrary and bureaucratic mistake that disrupted the lives of a handful of people, but a reminder of the unjust nature of Britain’s approach to immigration which negates the humanity of many people of colour. Having said that, the scandal should prompt Britain to rethink its approach to immigration, firstly by deconstructing the relationship between race and immigration.

Windrush is a reminder of the unjust nature of Britain’s approach to immigration.

The deputy secretary of the Fabian Society wrote during the Brexit referendum campaign that “the left must stop conflating immigration with racism”. But when the official Vote Leave campaign produced a poster stating “Turkey (population of 76 million) is joining the EU”, hoping to stir up an anti-immigrant and anti-Muslim sentiment in order to win the referendum, the suggestion that we can separate concerns about immigration from racism seems absurd.

The current discourse on immigration can be summed up as “good migrant” vs “bad migrant”, desirable immigration and undesirable immigration. Both labels inevitably invalidate the humanity of those it is used to define. Which one they are is determined by their economic contribution and the extent to which they pose a threat to Britain’s cultural cohesion. Are they a burden to the nation’s already struggling state infrastructure or do they work and pay taxes, supporting the state? Do they fit into “British society”or do they deviate from “British norms”? These standards fail to appreciate the fact that immigration restrictions affect real people.

While making the economic case for immigration is insightful, we must not end the conversation there. Immigrants are real people – the idea that the decision about whether they can settle in the UK comes down to just numbers is cold and disdainful. If the Home Office is really to adopt “a more human face” as the Windrush Learned Lesson Review calls on it to do, it should reconsider the way immigrants are talked about and the requirements set for them to gain the right to come to the UK.

The Home Office should reconsider the way immigrants are talked about and the requirmements set for them to gain the right to come to the UK.

The legitimacy of the nation state and national borders should also be questioned. For centuries, borders have violently and arbitrarily divided people. Britain in its capacity as an imperial power played an integral role in erecting such barriers to movement globally – for example the Partition of India 1947 and the Scramble for Africa. But removing barriers is a long-term goal, in the short term the government should be making the process of migrating easier. They should open a direct route for refugees to safely enter the UK. The cost of applying for the right to settle should be minimised. The narrative that immigrants are “other” and therefore undeserving should be abandoned. With climate change set to displace approximately 1 billion people by 2050, questioning barriers to immigration is more necessary than ever.

The narrative that immigrants are “other” and therefore undeserving should be abandoned.

The Windrush scandal cannot just be dismissed as an accidental misfortune. It is yet another example of how Britain has failed to understand the role of race and racism in Britain. Politicians must not only “right the wrongs” suffered by the Windrush generation but they must also understand how and why immigration has repeatedly discriminated against people of colour.