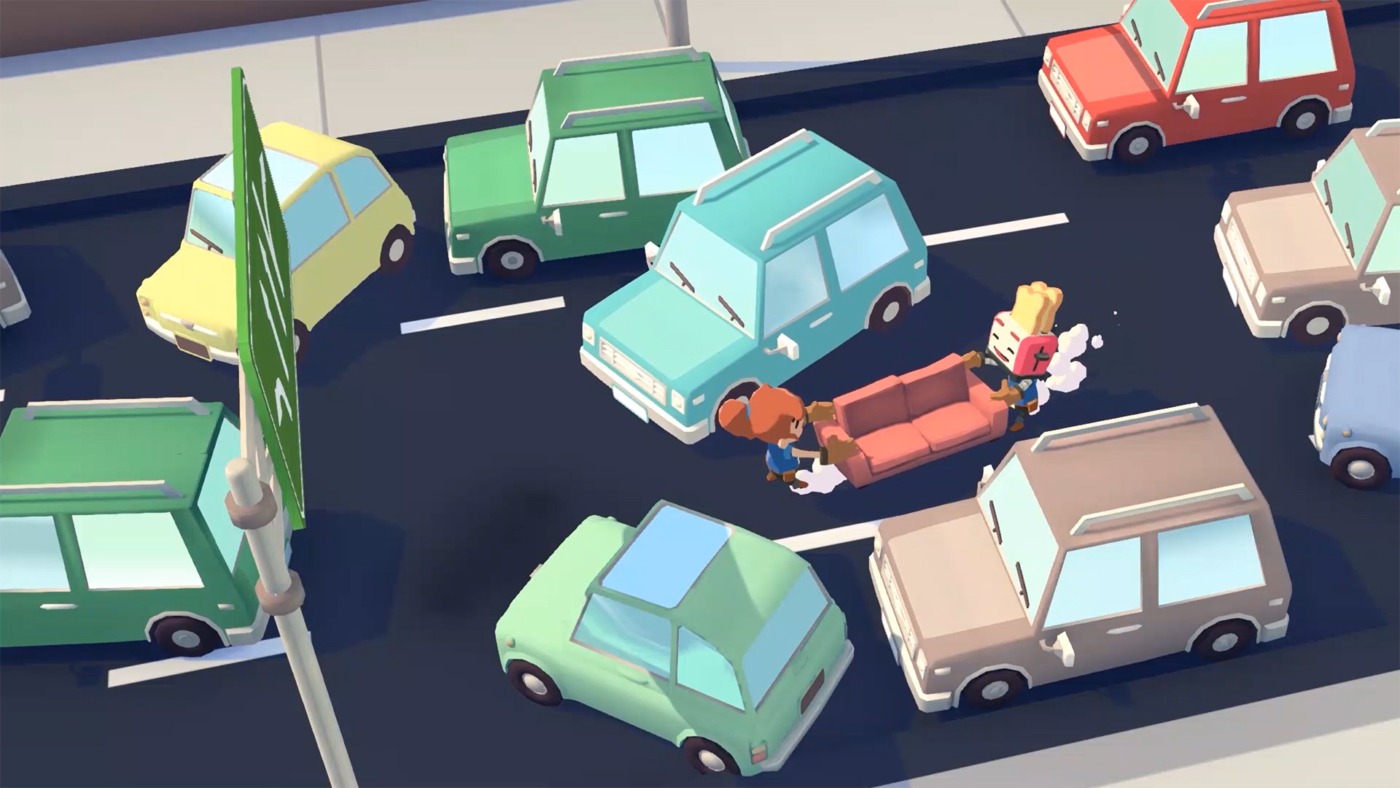 It’s now week six of lockdown. After exhausting all board games and actually finishing a game of Monopoly, families around the country are clamouring for more multiplayer or co-op games to keep them entertained. Moving Out is a new literal couch co-op game that sees up to four players team up as part of a removal company, and will have families laughing, arguing, and breaking TVs…just not in the way you would think.

Moving Out follows the Smooth Moves Removal Company as they seek out jobs in the town of Packmore. On each job, your aim is to load all required items from the house or building into the removal van by any means necessary, and I mean, by any means necessary.  The lawyers at Smooth Moves have clearly worked out an incredible insurance policy, as the wacky and somewhat clumsy employees are encouraged to smash windows, break doors, and throw possessions across running water all in the name of efficiency.

Your first jobs are fairly simple house and apartment removals, but as the company gradually gains a better reputation, your work becomes more onerous as you take on offices, farms and zoos. What starts as a simple grab-and-run mission quickly adds problem-solving elements on the harder, more inventive levels with narrow corridors, live animals, obstacles, and the dreaded ‘L shape’ couch.

It may be tempting to just throw all the items into your van and hope for the best, but on the levels with larger, oddly shaped possessions to move, you will find yourself spending a lot of time organising these objects so they fit perfectly, an element Moving Out shares with one of my favourite games, Death Stranding.

The wacky and somewhat clumsy employees are encouraged to smash windows, break doors, and throw possessions across running water all in the name of efficiency

It is the sheer chaos Moving Out exudes that makes it fun to play. This extends further than just the gameplay, as every aspect of the game, from the level select menu that sees you crashing into cars around the map on the way to your next job, to the offhand remarks from your boss about health and safety tips (which I would not advise you to follow).

Usually in these types of games, you can often rush through levels and not look back to appreciate the finer details of a level that developers will often spend many late nights perfecting. Moving Out makes you want to go back and play past levels, through adding extra challenges for levels that are only unlocked once you have completed the job, my personal favourites being getting the frog to cross the river in a Frogger-like level, and trying not to break anything during the job (I found this one particularly challenging).

Completing these added tasks, along with progressing further into the game, unlocks extra, wackier levels for you to play. Tapes found in the VHS store take you through the history of Smooth Moves (although I believe the manager may be feeding you propaganda), opening up the opportunity for larger-than-life removal missions, such as hastily throwing items off of a low-flying plane into a moving car after the shipment was incorrectly marked for the wrong place.

Levels unlocked in the arcade offer even more of a challenge, further introducing platformer elements into the game. This did alert me to some issues with the controls feeling a bit floaty on occasion, as they often took a few extra steps to stop causing me to fall off the stage and respawn out of a cardboard box. I’m not sure if this is intentional, however, as it added to the overall chaotic and clumsy feel Moving Out goes for.

All the above traits of Moving Out already make it into a solid, must-play title for all your friends and family, but there is one final, absolutely vital aspect that this game gets right: accessibility.

It is rare to see a game that is so accommodating to all types of players, which is crucial for these types of game, given that they are commonly played with your partner, children, or non-gaming friends. The Assist Mode enables the scaling back on some of the challenge in parts of the game, including granting you extra time for levels with no penalty or making items lighter to carry.

On the disability side, Moving Out includes a dyslexic setting that makes the text easy to ready; an important consideration for all games that is sadly overlooked in many, which is what makes Moving Out- a game that is not that text-heavy compared to others – that much more amazing.

One of the most under-represented groups in video games is those in wheelchairs. The wheelchair defines what they can do, and seen as a problem that can be solved, often with futuristic technology. At best, games like Animal Crossing will include a wheelchair in some form or another, whereas at the very worst, they will be mocked.

Moving Out goes further than most games, giving you the option to play as any character, in a wheelchair. The character customisation without such an option is already fantastic, but this addition, while sounding simple, is an incredibly powerful message.  Disabled gamers have often lacked the opportunity to create a character that truly represents them, and this addition is one all game developers should look to include in the future. When talking about representation and accessibility in video games, Moving Out absolutely delivers.