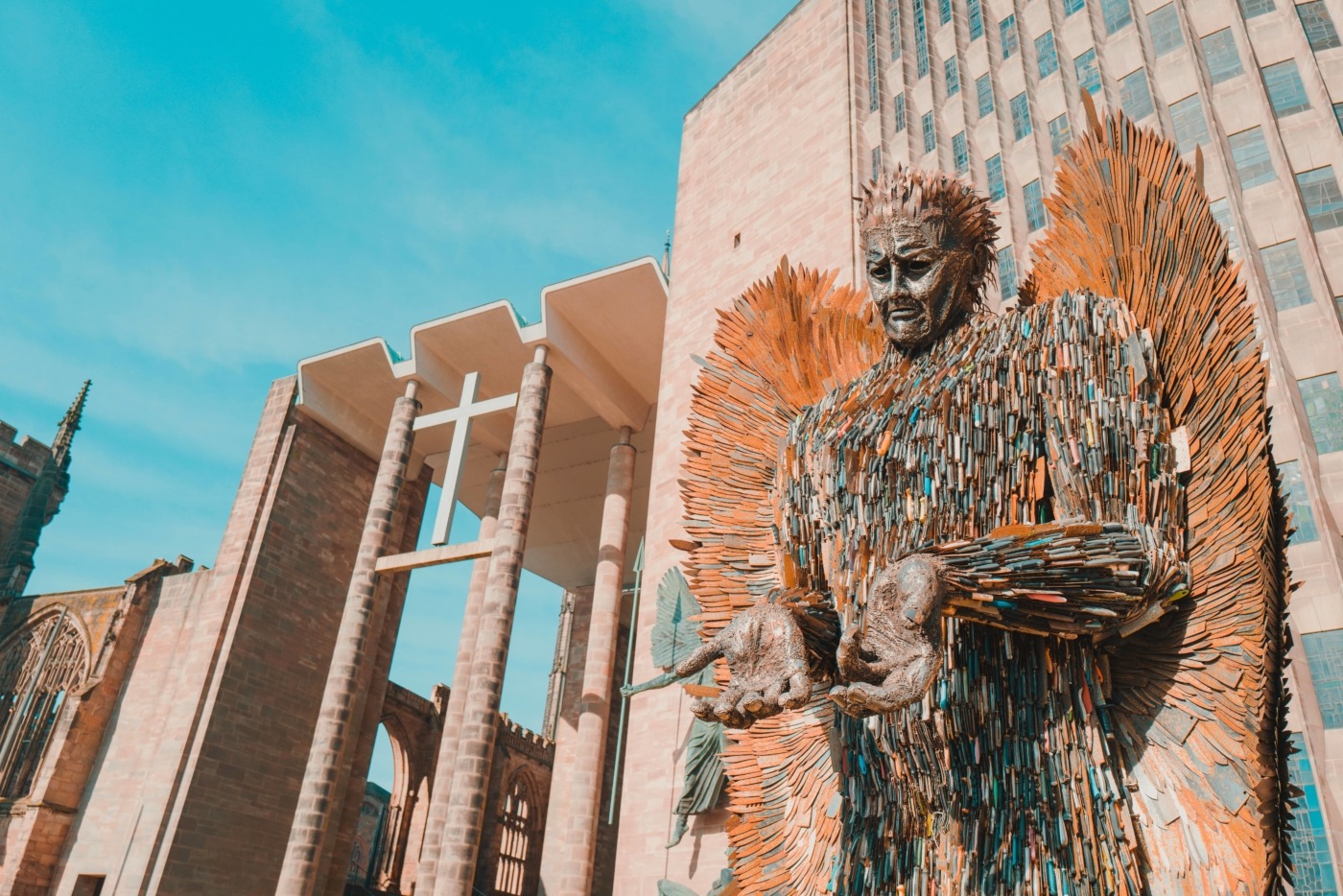 Since the city’s successful bid for the title of City of Culture (CofC) in 2021, renovations to the city’s central hub have been well underway in a number of areas. The introduction of new restaurants to transform the Cathedral Lanes shopping centre, remodelling well-frequented areas to make them more aesthetically pleasing and a focus on preserving and improving the high streets of the city have largely been met with enthusiasm.

Running parallel to these improvements, however, is a troubling rise in crime in the city, specifically gun and knife related incidents. In November 2019 alone, there were 40 weapon-related crimes reported in the city. This is the highest number of incidents recorded since May 2013 when weapons-related crimes were first separated into a distinct category, and points towards a significant growth of weapons present and being used on the streets of Coventry.

In November 2019 alone, there were 40 weapon-related crimes reported in the city.

In November 2019, a 17-year-old teen was stabbed in a McDonalds on Cross Cheaping, a road infamous with locals as a dangerous place to be after dark. This incident was one in a chain of four stabbings within five days, two of those happening in the city centre. A 15-year-old was shot outside the same fast food restaurant in July 2019, and the year saw a 117% increase in stabbings compared to 2018.

In a statement from a public consultation released in February of 2019, Police Inspector Mark Teago identified that “the police have experienced a significant increase in demand and crime since 2015”. Focusing on the St Michael’s area (which covers the city centre), he expressed concerns that “young people [were] at risk of exploitation within specific areas of the city centre”, and that a “significant” worry surrounded “knife crime, due to the often devastating nature of the offences”.

The CofC’s improvements to the city aim to bring a higher influx of visitors in, hoping for a boost to local economy and salvation for shops clinging to their place in the high street. Their goal, as stated on their website, is to bring “large-scale spectacle, music, dance, theatre and poetry as well as more intimate, celebratory cultural and heritage experiences in every ward of the city”.

The CofC’s improvements to the city aim to bring a higher influx of visitors in, hoping for a boost to local economy and salvation for shops.

Given the concentration of the rise in crime in the St Michael’s area, however, there are concerns surrounding the safety of these additional visitors. Alongside the higher number of people expected to populate the city centre who may be at risk, this influx to potentially bring in more conflicts.

In an exclusive comment to The Boar, Rashid Bhayat addressed some of these concerns. A Trustee of the Coventry 2021 scheme, a key participant in the bid for the title and honorary graduate of the University of Warwick, Bhayat’s career has focused primarily on supporting vulnerable members of the community. Founder of the hugely successful Positive Youth Foundation (PYF), he began by highlighting that “it is important to note that Coventry as a city is not unique in its challenges when it comes to issues around safety”.

“Having an event the size and scale of the CofC will no doubt bring in additional visitors to the city, something which we are looking forward to, so we can show the world of all of the amazing things our city and region have to offer”, he went on. Indeed, the city’s rich history is a focal point of interest that incoming visitors are able to access. The cathedral ruins and Transport Museum already attract visitors from around the world, and the CofC will undoubtedly multiply that interest.

He continued that “as a citywide partnership, a number of organisations have, and will continue to come together to ensure that every visitor to the city, alongside our host residents, will be able to look forward to a safe and enjoyable experience”. While he acknowledged that they “can’t predict what may or may not happen outside of our control”, he maintained that “we must remain positive that we will all experience an amazing event”.

The consciousness around the threat of crime sparked West Midlands Police to appoint “a senior inspector” to work alongside the Trust.

Many have expressed concerns that the renovations to the city have been too heavily focused on bringing in visitors from outside areas rather than improving Coventry for the residents living there already. The latest manifestation of this worry came in the protests against the felling of trees in the Broadgate area of the city centre, ending in a mock-funeral being held by environmental protesters. Broadgate had boasted the greenery for years and was suddenly gone, seemingly with no obvious notice or public consultation from the council.

Many have expressed concerns that renovations to the city have been too heavily focused on bringing in visitors from outside areas rather than improving Coventry for the residents living there already.

In response to the divided opinions, Councillor Jim O’Boyle stated that the felling of the trees were part of “The plans to improve the Upper Precinct, Market Way and Smithford Way” areas of the city centre, improvements that had “widespread public and cross-party support and will make a real difference as we get ready for our year in the spotlight as UK City of Culture in 2021”. The council replied to concerns with a pledge to plant two trees for every one they cut down, but many maintained that the felling of the trees was an unnecessary decision.

Bhayat sought to dispel concerns that the CofC scheme was focused solely on the tourism aspect of their goals, highlighting that “There are a number of initiatives already underway in the city, including programmes designed to engage with all ages and cultures of our communities across the city and beyond. The programme will continue to be developed by a team of experienced and motivated staff, trustees, organisations and volunteers”.

“Through the highly skilled partnership around the programme, we will strive to create and deliver a programme that is meaningful to its residents and visitors alike”, alluding towards an equal consideration of both groups. In a nod towards the city’s famous and respectable history, he noted that “Coventry takes pride in its reputation as a city of welcome, peace and reconciliation”, a sentiment that he hopes the CofC programme will accentuate and extend.

His comment that “as a city we recognise that young people and diversity are amongst our most valuable assets. The 2021 programme will work with those young people who most need to realise their potential but also recognise and surface the challenges they face” is particularly pertinent when considered alongside the work that the Positive Youth Foundation has done in youth services. Offering a vast range of programmes with the aim to “help young people achieve their potential”, PYF has the development and support of often vulnerable young people at its heart.

An Honorary Partner of the CofC, PYF’s involvement is an encouraging sign that the programme will incorporate services for the city in its goals. Educating young people and providing crucial support early on could well be a defining factor in combating the rising crime rates and keeping weapons off the streets of the city. It is certainly a step in the right direction, especially when targeting specific areas of the city where gangs are known to scout young people into recruitment.

Bhayat highlighted the “wide range of outcomes” the programme hopes to achieve, mentioning the examples of an “increase in civic pride and cultural activism across the city; participation by under-represented groups; distribution of events across the city; targeted representation of citizens in cultural leadership and programming”.

He concluded by stating that “as a local organisation, committed to working with our communities, we see this opportunity as one that can not only transform our city, but the life chances of generations of our communities across the city and beyond”. An encouraging sentiment, Bhayat’s statement sheds some light on how the programme plans to combat the issues that have arisen with regards to the 2021 title.

If the goals of the CofC programme prove fruitful, then there is the potential for Coventry to experience positive change in light of the renovations made.

As Rashid Bhayat drew attention to, Coventry has a remarkable history of diversity, acceptance and community cohesion, a history incompatible with the reputation of crime it has since attracted. Although the City of Culture title may seem at first glance to prioritise tourist gratification, on deeper levels it strikes me as a programme dedicated to accentuating what the city has to offer as well as developing pivotal initiatives within the communities that need support. This is an ambition that the city is in dire need of and is shaping up to be one that will prove successful, hopefully enacting a much-needed transformative change for the city of Coventry.