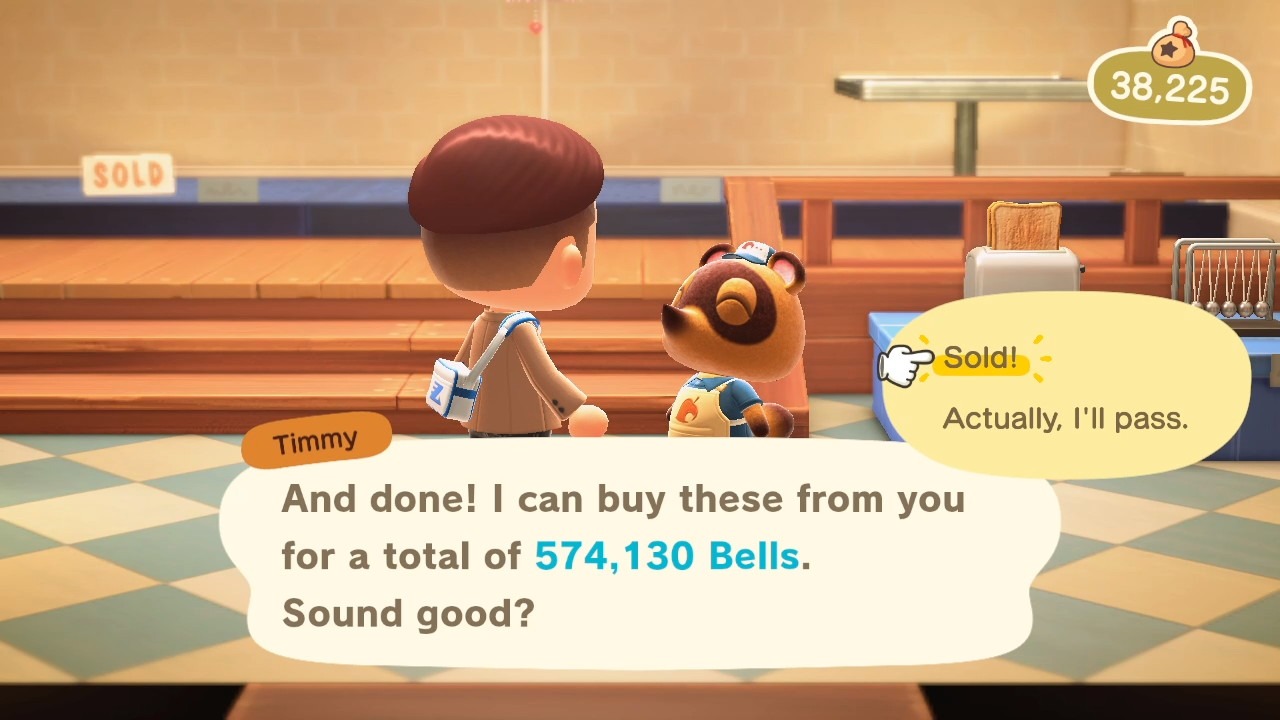 Over the last month, gamers across the globe have put countless hours into Animal Crossing: New Horizons. As a game that runs in real-time, the ‘story’ (if you can call it that) of Animal Crossing has now faded into the horizon, leaving players with the freedom and tools to create a perfect island community.

Unfortunately, to do so requires a lot of Bells. Moving buildings from their starting position will set you back 50,000 Bells, while building bridges and inclines will cost upwards of 200,000 Bells. To put this into context for those unfamiliar with the Animal Crossing currency, some of the rarest and most expensive fish in the game only sell for 10,000 Bells.

For those with little time or patience, fishing and catching bugs for a few hours a day is not an option. There are various ‘get rich quick’ schemes you can find for Animal Crossing, from finding the fabled ‘Tarantula Island’ to planting money trees, but one of these methods has proven more successful than others – selling turnips.

Turnip selling may not seem like the most profitable venture a budding entrepreneur should embark on, but in Animal Crossing: New Horizons, it’s an easy money-making scheme.

Here’s how it works. Every Sunday, a small hog named Daisy Mae (Joan’s granddaughter, for those fans of the earlier games) will visit your island selling turnips for somewhere around 100 Bells each. There is no upper limit on the number of turnips you can buy, and so players will spend thousands if not millions of their hard-earned Bells on these root vegetables.

To sell these turnips, players must talk to Timmy and Tommy in Nook’s Cranny, who will buy them at a price ranging from as low as 20 Bells to over 600 Bells per turnip. This may seem like a small amount, but when you bring in the fact players have spent millions, you are looking at a serious turnip turnover.

The catch, however, is that it is quite rare for the Nook twins to purchase turnips for such astronomical amounts. And so, if you do not want to risk selling your turnip collection for a loss (or risk them rotting after a week), the only way forward is seeking help from the online community.

To find such people, there are Animal Crossing-specific Discord servers and forums, where players will open up their islands for others to sell their turnips at a high price. Is this done just to make friends? Maybe, but there’s also an ulterior motive that often spurs Animal Crossing players inviting others over to explore their island.

The demand for selling turnips is now so high that entrepreneurial players have now implemented queues and entry fees for those seeking to profit. Entrance fees can set you back 99,000 Bells, or a few Nook Miles Tickets, an item that can only be acquired through spending time doing various tasks around your island to earn Nook Miles.

Turnips aren’t the only thing for sale on these forums. While Animal Crossing has a reputation for being a wholesome community, this changes when an ‘ugly’ villager finds their way onto your island.

Certain villagers have become highly sought after online, including Raymond, a smug cat, and Audie, a peppy wolf. As these two animals do not yet have Amiibo cards to unlock them, the only chance of finding them by yourself is to visit ‘Mystery Islands’ with Nook Miles Tickets and hope that out of the 500 villagers, you beat the odds and find your favourite villager.

Instead, people are again turning to Discord servers to fulfil their Animal Crossing needs. Here, they can buy and sell villagers with other players, again for a high price.

Certain villagers have become highly sought after online, including Raymond, a smug cat, and Audie, a peppy wolf

You may wonder how exactly people can trade villagers, so here’s how it works. If you ignore and upset a villager enough, they will come to you wondering if they should move away. Then, with your blessing, they will start packing up their belongings on the day after. This process is known as putting a villager in ‘boxes’, making them available to other players who, if they visit your island whilst this villager is saying his goodbyes, can convince them to move to their island with a simple conversation, so long as they have paid for that villager.

The price on these villagers still varies enormously from person to person, with some happy just to get rid of their villager and replace them with a more ‘aesthetic’ character. Others demand fees in excess of 50 Nook Miles Tickets. Alternatively, desperate players are resorting to eBay listings to find their favourite villagers, where the most exclusive villagers can sell for over £50.

Animal Crossing: New Horizons is still in its infancy, but thanks to some eager players craving perfection, there is now a thriving market of villagers, items, and turnips. In a world where economic decline seems inevitable, the Animal Crossing economy is booming.