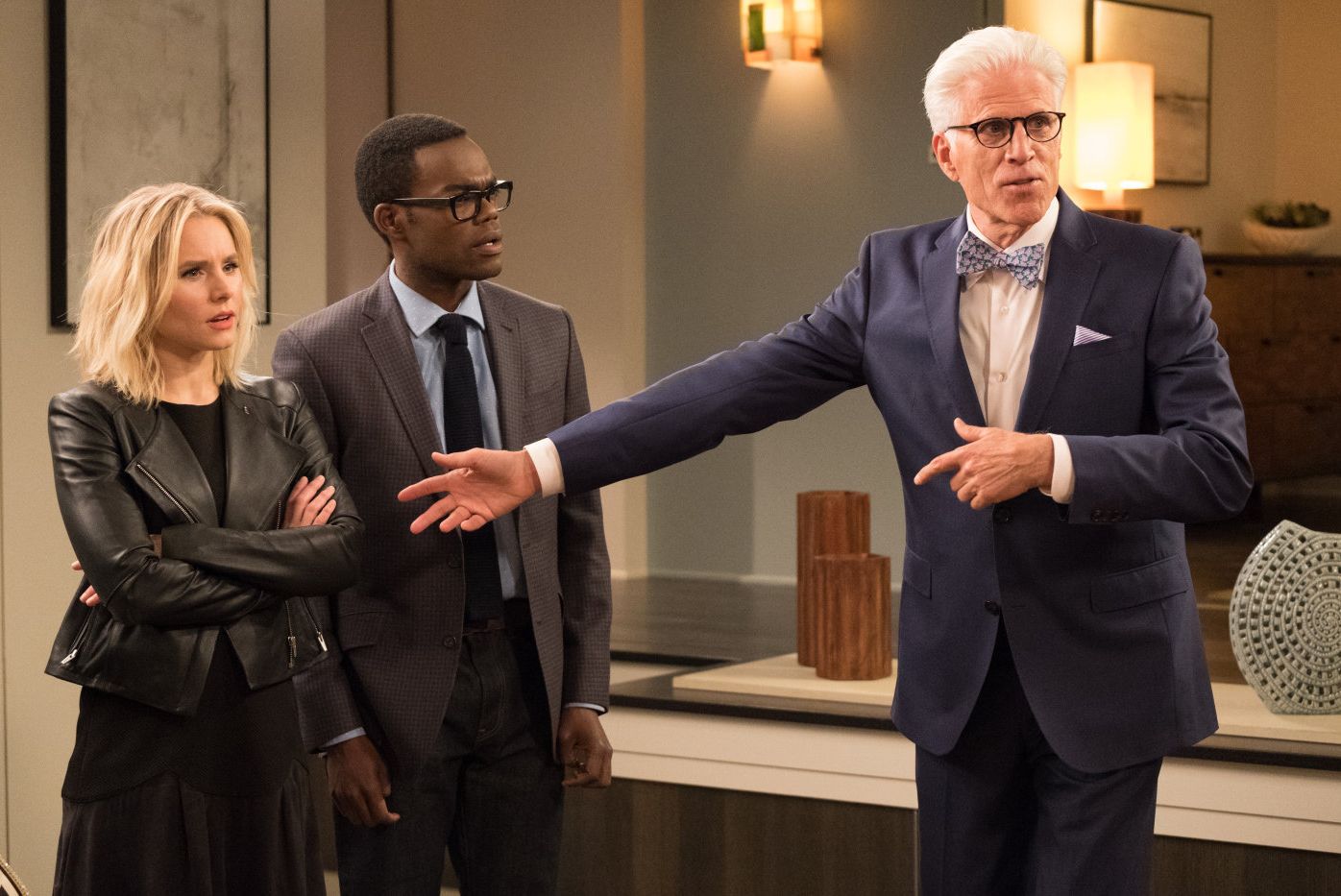 In the beginning, there was the word, and the word was commissioned. And the word was with the show, and the word was the show. That show was broadcast over four years, and when the fanbase looked upon the show complete, they found it good. Actually no, fork that. The Good Place wasn’t just good, it was absolutely forking fantastic, and like all great stories, it ends perfectly.

The Good Place is a show which clearly knew what it wanted to be, what story it wanted to tell, and where that story would end from the very beginning. It’s taken us through a wild, twisting journey through philosophy, dimensions, time knives and Derek in four seasons bursting with ideas and optimism. It’s helped reshape comedy and inspired many more comedies yet to come. So, how do we even talk about the final season? Short version of this review: it’s excellent and wraps up everything with aplomb. Go watch it, now.

The Good Place is a show which clearly knew what it wanted to be, what story it wanted to tell, and where that story would end from the very beginning

Longer version: at the end of its third mostly Earth-bound season, we were back in the afterlife ready to test the idea that humans could learn from their mistakes and become better people. Eleanor has to pretend she doesn’t love Chidi. Tahani, Jason and Janet support her and Michael as they outwit demons, their test subjects and each other’s failings. And in the background the clock is ticking for both our main characters and humanity. The stakes have never been higher.

Now that the series is back in the afterlife, The Good Place feels freer with its ideas and the season effortlessly goes through the works of  interrogating demons, going to Hell and Back, summoning an effervescent elephant to tell universal truths. At times the show falls back on ideas which have been done before, but it all works towards helping humanity evolve into something better, even if that means occasionally cheating the system to do so. By the time the journey’s over, we’re far from where we started, but in the best place possible.

Seeing Eleanor, Chidi, Tahani and Jason grow from four screwed-up people into the best representatives of good in the universe has been a pleasure to watch and Season 4 gives many of them their best moments. Eleanor leads the team with a newfound confidence while never losing her roots. Chidi gets an episode dedicated to his entire life and we see him grow from indecisive to a key decider in how the universe plays out. Tahani, having overcome much of her family baggage, continues to have met every celebrity under the sun but also learns how to help people in the best way. And then there’s Jason: the pure, the unwavering Jason Mendoza, who goes to Hell and back in an episode to save Janet and by the end of this show had me in tears.

By the time the journey’s over, we’re far from where we started, but in the best place possible

Our humans aren’t fighting alone however, as Janet continues to be basically the perfect not-human, not-girl. While this season isn’t quite the showcase that the last one was for her, she manages to elevate the whole show in every scene she’s in. Then of course, there’s Michael, who goes on as great a journey as any human, and if you ever feel gripped with nihilism, the episode he spends with Bad Janet is a showcase for why living and improving is the best way forward.

From everyone’s ideal funerals, to a deadly game deciding who is an imposter and who isn’t, to fixing everything wrong in the afterlife, The Good Place never loses its ambition or its heart and ultimately delivers a perfect end to the show. It’s a journey I’ll be happy to take again, though my heart will take a little while to recover. I won’t spoil anything, but bring tissues for the finale.