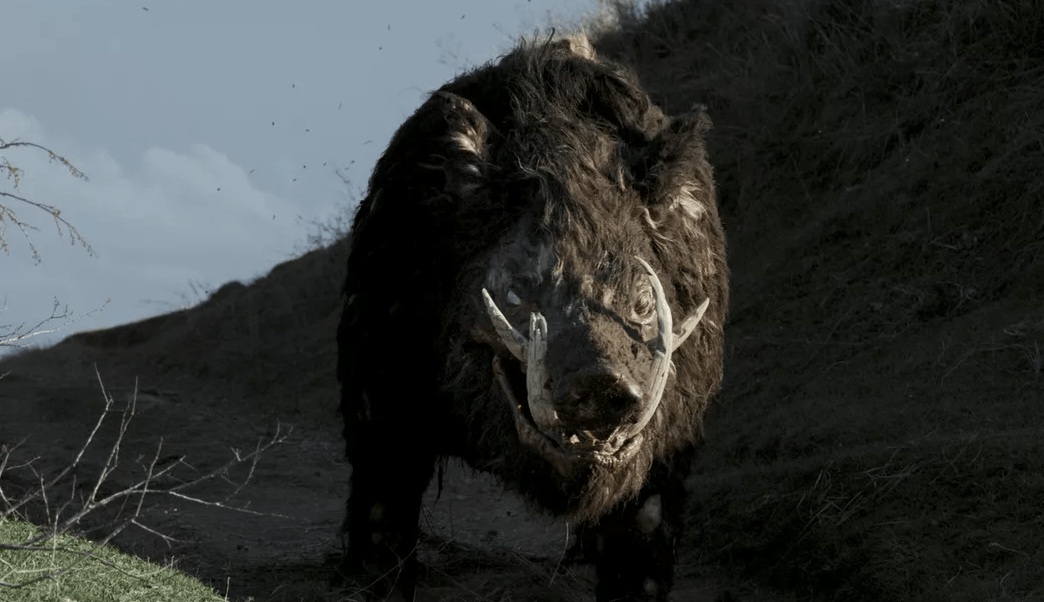 At the time of writing, this is the 100th article I have written for The Boar since I started out in 2016. To celebrate this personal milestone as a writer and former Film Editor for this publication, I decided to review the film that’s title was as close to the publication’s name as possible. Sadly, there is no film called The Boar. But there is one called Boar, an Australian low-budget B-movie featuring, unsurprisingly, a giant killer boar – close enough.

To describe the plot of Boar would imply the film has one, when in fact it does not. While it avoids many of the pitfalls of b-movie monster flicks like the Mega Shark franchise, in that you do regularly see the titular monster on a bloody rampage, the film doesn’t offer anything more than that. It has characters, in the broadest sense of the word, who are introduced in the opening scenes, and they go to do things and mostly get killed. The film features talking, killing by said giant boar, more talking, and more killing via giant boar.

To describe the plot of Boar would imply the film has one, when in fact it does not

To suggest that the film could have been anything more given the title is a fair observation, but Boar is not the first film to suggest a giant beast can make for gripping, albeit somewhat laughable cinema. Highlights of the giant mammal-monster movie genre include the likes of Night of the Lepous, which features an army of giant carnivorous rabbits and Black Sheep, a modern cinematic treasure about a sheep herd with the power of zombies and the herd efficiency to match anything from 28 Days Later. Boar doesn’t have any excuses to be boring or uncreative when it’s clear that previous directors have made far more from less.

As is often the case, a lot of Boar’s issues stem from two things: the monster and the people it loves to chow on. In the case of the former, this is by no means the worst monster ever put to film. Whenever it’s running or moving its legs at all, it is clearly CGI, but when it’s standing menacingly, distractingly still and bellowing with blood-coated horns, it makes for something of a stupid-but-not-horrific presence on screen. It cleaves its way through most of the B cast and a few of the A cast and does so with a lot of chomping, impaling and crashing into people’s cars from unexpected side angles. By and large it doesn’t phone in its performance. Unlike many of its animal counterparts, however, there is no explanation as to how this thing came to be, which is often part of the fun in these kinds of films where radioactive sugar can make giant ants and nuclear waste can turn beavers into berserker zombies.

While the monster is not the worst, Boar utterly fails in every other department. There are barely any characters in this film. Instead we have broad beery Australian stereotypes, confused old men, the most detestable jock-boyfriend on the planet who literally pushes his girlfriend’s dad into the path of the rampaging animal, and other people who technically are in the film. The cheesiness of the premise is barely taken a hold of and instead is played seriously, which, given the premise, doesn’t work. Between kills, characters try to iron out family problems, drinking tabs and attitudes towards masculinity, none of which go anywhere. In the end this is just a film about a boar that kills people and nothing else.

Great horror is about what we fear and what lies beneath the facades of our lives and society. Boar is not great horror. It exists because someone wanted to make a film about a giant killer boar but wasn’t clever enough to make it work as a funny creature feature. Watch drunk with friends if at all.