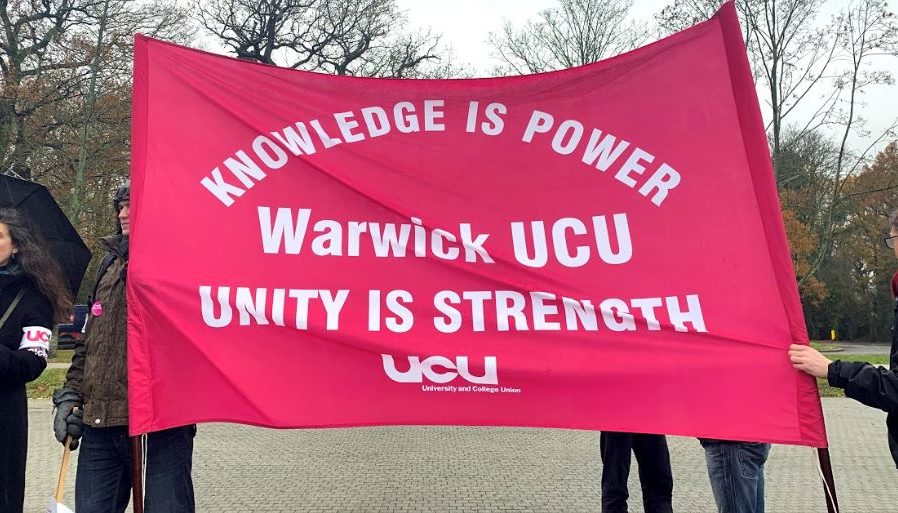 Warwick students divided in support for UCU strikes this term

Warwick students are divided in their support for the University and College Union (UCU) strikes scheduled for this term, a survey by The Boar has shown.

Strikes led by Warwick UCU are set to take place for 14 days between Thursday 20 February and Friday 13 March, during Weeks 7-10 of Term 2.

Warwick is one of 74 UK universities which may see staff striking for two weeks.

The strikes centre around the sustainability of the Universities Superannuation Scheme (USS) and rising costs for its members, as well as on “universities’ failure to make significant improvements on pay, equality, casualisation and workloads”.

Out of 371 respondents to The Boar’s survey, 43% said that they did support the strikes, whilst 40% said they did not and the remaining 17% said they “didn’t know”.

The survey revealed that there was a difference in levels of support between faculties at the University. Over half (52%) of Arts students said that they do support the strikes, while an equal percentage of Social Sciences students responded that they do not.

Science, Engineering and Medicine students were more equally divided, with 43% answering that they do not support the strikes and 39% stating that they do.

Do you support this term’s strikes?
Infogram

Support also differed by year group. First-year and third-year respondents were equally split, with 39% of the former answering “yes” and 39% of the same group also answering “no”.

41% of third-years said they do support the strikes and an equal percentage of respondents in that year group stated that they do not.

However, second-years leaned more towards not supporting the strikes, with 42% and 49% answering “yes” and “no” respectively.

Out of the 11 postgraduate students who responded to the survey, six expressed support, two did not and three answered that they “didn’t know”.

An overwhelming number of respondents believed that monetary compensation should be given to students for lectures and seminars missed as a result of strike action. 89% of respondents thought this should happen at Warwick.

Similarly, 92% of all respondents said that the impact of the strikes on students should be mitigated.

In terms of mitigation measures, 297 respondents thought there should be changes to exam content, 280 said that a later date should be given to coursework deadlines and 256 answered that group mitigation should be applied to the modules that are particularly affected.

This term’s strikes follow industrial action by UCU members in Term 1. Union members at 60 universities walked out for eight days in November and December, reportedly affecting a million students.

34% of those in the Science, Engineering and Medicine faculty felt that students were well-mitigated, compared to 21% of those in Social Sciences and 20% of those in Arts.

Disagreeing with the notion that effects of the strikes were mitigated well by their department last term were 44% of Social Science respondents, 38% of Arts respondents and 32% of Science, Engineering and Medicine respondents.

40% of Arts students felt that their department’s mitigation was “somewhere in the middle”, followed by 27% of Social Sciences students and a fifth of Science, Engineering and Medicine respondents.

Do you think you should be monetarily compensated?
Infogram

Of those who said that they did not support this term’s strikes, 62% said they did previously.
In January, 59% of Warwick UCU members voted for the pensions re-ballot, 82% of which supported strike action and 90% agreeing to action short of a strike.

For the casualisation and gender pay gap re-ballot, the same proportion of 59% voted. 76.8% of voters supported strike action and 87.08% agreed to action short of a strike.

Dr Myka Tucker-Abramson, chair of Warwick UCU, told The Boar: “This is by far the highest turnout we have ever had for a ballot on pay and casualisation and comparable to the ballot we got on pensions in 2017.”

On whether the branch believes students should be able to claim compensation for classes missed as a result of the strike, Dr Myka Tucker-Abramson said: “Warwick UCU believes that no student should have to pay to attend university because this view assumes that education is a commodity and students are consumers. We worry that claims for compensation reinforce this logic.

“However, if students want to organise collectively to demand compensation that is their right.”

Dr Tucker Abramson added that the union has “solidarity funds in place at both a national and local level to support striking members”.

“Our members are fighting for their futures – whether that’s to make sure they are able to retire, to have stable contracts so they can afford to pay their rent and bills, and to ensure that the next generation of women and BAME university staff are paid as much as their white male counterparts,” she said.

“And while our members don’t want to go on strike, they understand the issues are too important not to.”

All percentages are rounded to the nearest whole number.