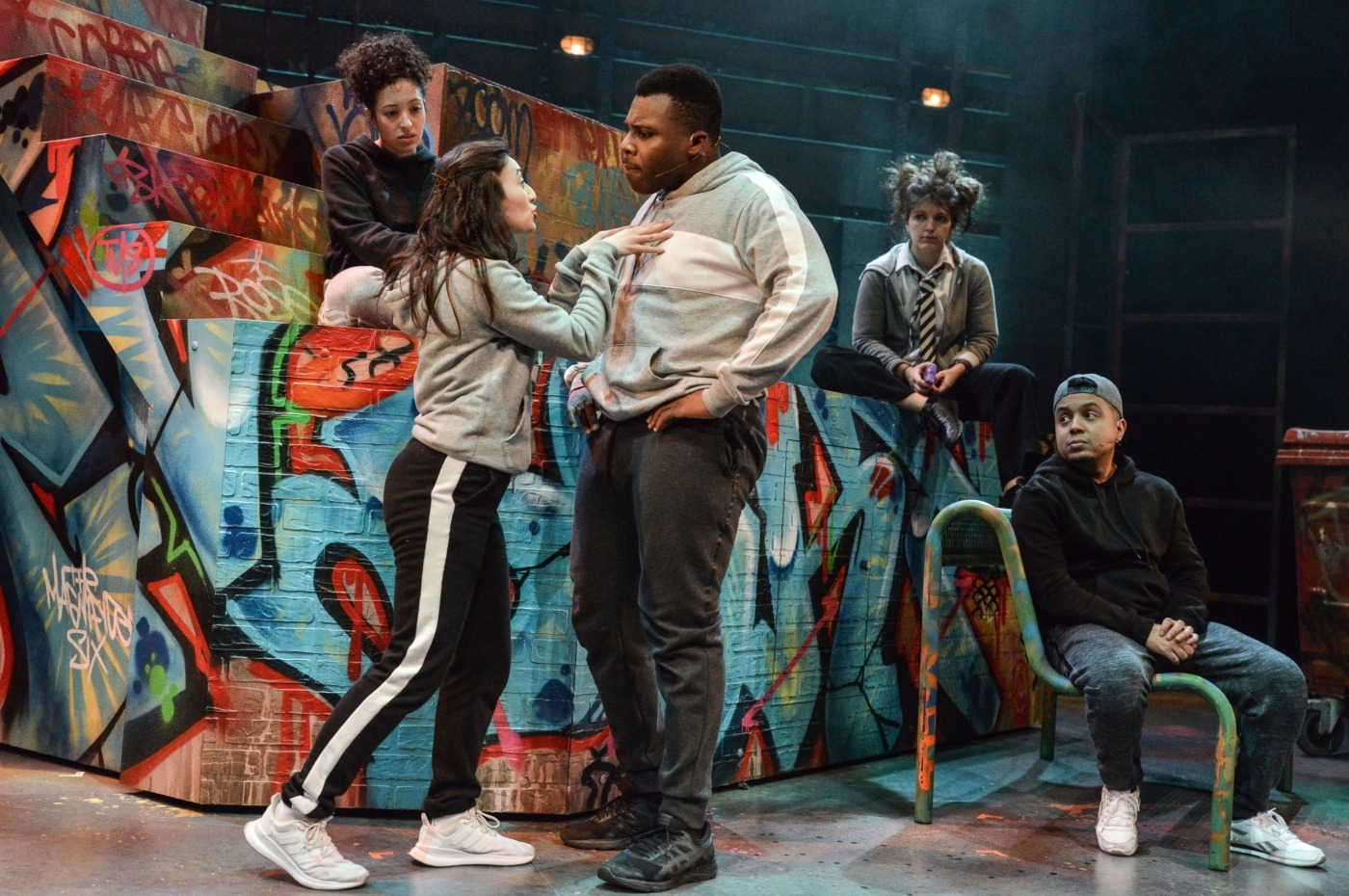 It’s been a while since I’ve had the opportunity to visit the city of Coventry, and so, naturally, I jumped at the chance to review Emteaz Hussain’s adaptation of Crongton Knights by Alex Wheatle. Of course, I made sure to stop by a delightful little pub called ‘The Town Crier’ beforehand. Experience has taught me that it is most unwise to attend the theatre on an empty stomach. It’s a good thing that I didn’t break this habit of mine, for Crongton Knights is an exciting, musically charged and heart-warming production that warrants a full stomach to enjoy to the fullest. Something that it’s protagonist might be inclined to agree with.

Upon entering the Belgrade Theatre, it didn’t take long to notice that all was not silent. The low, intimidating noise of the Crongton estate polluted the auditorium: cars, construction work, heavy trucks and an enigmatic beating sound – the beating heart of the estate? Only the Sound Director, Adam P. McCready, will know for sure but it certainly achieved its aim of drawing me into this world.

As the titular Crongton Knights made their first appearance, in a powerful, energetic piece called “The Magnificent Six.” One of the strengths of the play are the inter-spaced raps, backed up by beat-boxing and song that infuses the play with a very welcome energy, successfully conveying both the euphoria and the anguish of our principal characters, whilst conveying the unique dynamic of the group of friends “different flavours that we’re bringing.” These musical numbers, for the most part, flowed throughout the scenes of dialogue, a credit to the talents of the Music Director and Composer Conrad Murray.

Venetia was played by the beautifully voiced Aimee Powell

The story is quite simple. Six friends agree to journey from their part of the estate to the dreaded North Crongton to recover the phone of Venetia, a teenage girl haunted by a maturity that has been thrust on her by her abusive ex-boyfriend and the death of a family member due to gang violence. The audience follows them as they travel to North Crongton and desperately try to return home, doing their best to avoid rival gangs, all the while overshadowed by the outbreak of a riot that has broken out across the estate.

The aforementioned Venetia – affectionately nicknamed ‘Vee’ by her friends – was played by the beautifully voiced Aimee Powell, who shifted between the psychological fragility of an abused girl morning the fact that “fairy tales don’t last long” and a sexually assertive young woman, very much at home when it comes to the rave that the group crash during the second act. Then we have McKay, a kind-hearted, energetic, flamboyant and food loving teenage boy, who feels torn between his bickering, separated parents and his bickering Father and brother, Nesta. Indeed, Nesta (played with realism and a subtle, almost stoic, aggression), whilst being a loving and supportive older brother to McKay also serves as the catalyst for much of the obstacles that the main group of characters will have to encounter. In one the earliest scenes of the play, Nesta hospitalises the antagonist of the play, gang leader Festus (played with a dark, yet surprisingly amusing charismatic energy by Simi Egbejumi) who later attempts to take McKay hostage to draw Nesta into a confrontation.

The tears that he bursts into following this feel genuine and, devoid of the usual hammy energy with which Shaw portrayed the character, a credit to his versatility as an actor

Whilst Venetia and McKay are certainly crucial characters, the de facto leader of The Magnificent Six is Bit, played by Zak Douglas. Arguably, Douglas had one of the most difficult roles to undertake. He successfully conveyed the myriad of conflicting emotions that drove Bit to such extremes as travelling into enemy territory to recover Vee’s phone. His affection for Vee, his concern for his friends (contrasted only by his frustration with Jonah) and his overriding guilt regarding his previous involvement with the criminal underworld of Crongton estate, especially following Venetia’s personal tragedy.

Jonah, who doubled as Bit’s foil and the primary source of comic relief for the production, was played by Khai Shaw. Shaw demonstrated much talent as the unofficial ‘clown’ of the group. His exasperated (though, not altogether unjustified) cowardice, his rather warped priorities (when the riots start to break out, his ultimate concern is whether he will be able to steal a new phone) and his bumbling attempts at flirtations with Saira often left me in stiches. Yet, Jonah is more complex than the cowardly clown that he often presents as on stage. Indeed, it must be remembered that he is often correct when he repeatedly points out how dangerous the mission they are all undertaking is. Following an encounter with the Hunchbacker gang, Jonah is threatened at knife point. The tears that he bursts into following this feel genuine and, devoid of the usual hammy energy with which Shaw portrayed the character, a credit to his versatility as an actor.

Yeva was able to effortlessly shift from bold, youthful energy into a quiet, subdued persona

Saira, portrayed as simultaneously assertive and vulnerable by Nigar Yeva, served as one of the more troubled characters of the piece. Her history as either a refugee or migrant from Syria has endowed her with a more vocally critical perception of the gangs which dominate Crongton, she recognises that compared to what her family has been through, they are little more than a trifle – and yet Yeva was able to realistically portray Saira’s apprehension (and disgust) whenever the group came face to face with one of the antagonistic gangs. Like the rest of the cast, Yeva was able to effortlessly shift from bold, youthful energy into a quiet, subdued persona, which was most notable when Saira spoke about her missing (most probably dead) Father: “I never thought I would spend every birthday replaying memories of my Dad in my head.”

Of course, it would be wrong of me to leave out the newest member of our central cast of misfits and outsiders, Bushkid, played by Kate Donnachie. Donnachie fully immersed herself into the character, from her scruffy hair, wrinkled school uniform and her chipper personality. Yet, once again, this chipper attitude proved to be a mask to hide the unfathomable loneliness of the characters. I found myself rooting wholeheartedly for the socially awkward girl, as she moved from an unwelcome tagalong, to a trusted watch dog and finally into a key member of the group. Donnachie portrayed this loneliness in a manner that was believable yet still entertaining.

The play seemed to be about creating a contrast between youthful, immature chivalry and an amoral, brutal adult world

The play seemed to be about creating a contrast between youthful, immature chivalry and an amoral, brutal adult world. The noble mission of the six friends takes place on a rough estate dominated by gangs, something that was perfectly conveyed through the marvellous design of Simon Kenny. Indeed, whilst the six friends are working to reclaim an item stolen from Vee, the adult world is more concerned with looting for chocolate, liquor and games consoles. The clashes between the noble, almost Rosseau-like innocence of the kids and the malevolent realm of the adults is often contaminated by violence, sexual perversion and racism.

Yet, as McKay puts it “sometimes have to get so bad before they realise what really matters.” So, what “really matters?” Well, the vision presented to us by the talented co-directorship of Corey Campbell and Esther Richardson suggests that what truly matters is friendship, family and, most
strangely of all in a world ruled by vicious gangs, mercy. If you are wondering how mercy fits into that optimistic triad, then perhaps you will have to see the show for yourself.

Crongton Knights is the The Belgrade Theatre until Saturday 22 February. Tickets are available here.

Gallery image with caption: Pantomime season returns: a review of ‘Puss in Boots’

Gallery image with caption: “I’m hoping something positive will come from it”: a preview of ‘How to Disappear Completely’

Gallery image with caption: “A breath-taking production by an incredibly talented team”: a review of WUDS’ ‘The Normal Heart’

Gallery image with caption: A musical about 9/11? ‘Come from Away’ is the latest hit show