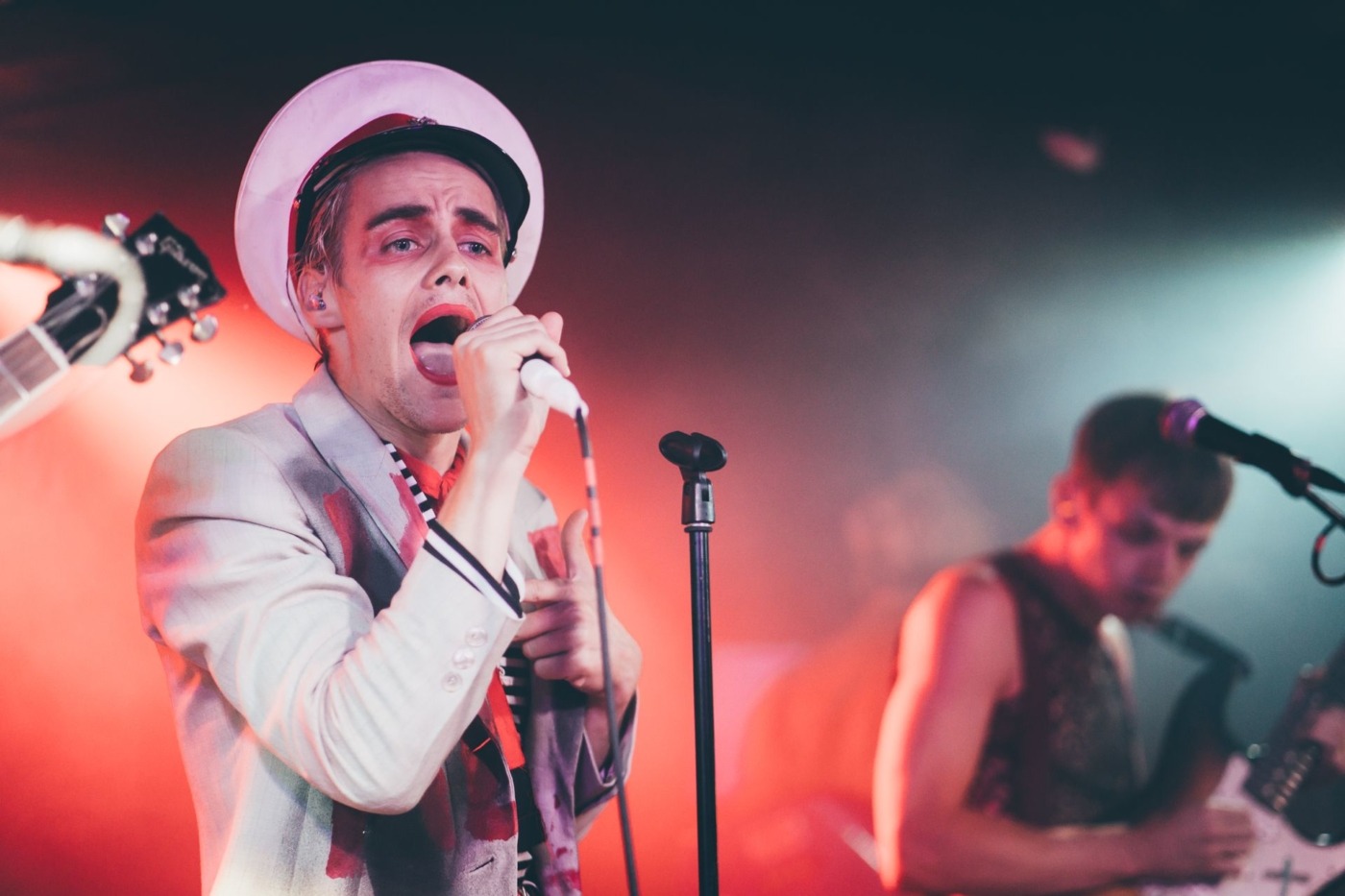 It has been a tough few years for HMLTD. The South London five-piece exploded onto the alternative music scene in 2017 with their gothic infused pop music seen as a welcome breath of fresh air at a time where guitar bands were too afraid to try something new. They signed with Sony and seemed destined for greatness, however that relationship soon soured and they were subsequently dropped, whilst tensions in the band led to their keyboardist leaving.

Here they are three years later, after picking up the pieces and going back to their roots, finally releasing their long-awaited debut.

The opening track ‘The West is Dead’ is a brash criticism of a western world where ‘The Dalai Lama wore Dolce & Gabanna in vermilion red’, with this anti-capitalist sentiment perhaps a nod towards their experiences with Sony. It sets the scene for an album that tells the story of a world full of disorder and greed.

The ensuing track ‘Loaded’ is a raucous guitar-based number where lead singer Henry Spychalski admits the band ‘’their soul to the devil’’ when signing for Sony. ‘To The Door’ is a song that has survived since the band’s pre-Sony days. It perfectly illustrates HMLTD’s genre-bending style, a fast-paced guitar-heavy verse which breaks out unexpectedly into a slow and synth-based a chorus, a combination that should not work, but does.

Here they are three years later, after picking up the pieces and going back to their roots

Another survivor from the band’s early days is ‘Satan, Luella & I’ and is a stand-out track on the album. This brilliantly flamboyant six-minute epic is a clear example of the influence David Bowie has had on the band and embodies their theatrical and melodramatic attitude. The song slowly builds up to a striking crescendo of guitars and piano, in a manner that shows off the band’s creativity at its best.

HMLTDalso show their ability to write catchy pop songs. Depeche Mode inspired ‘Mikey’s Song’ could easily feature on the Radio One it references whilst ‘149’ is a trip-hop infused track that is more evocative of a Massive Attack record. The eclectic mix of genres means that on your first listen you are constantly kept on your toes, unsure what is coming next.

Towards the back end of the album, we hear ‘Blank Slate’ which is the strongest song on the album both musically and lyrically. Describing the aftermath of a revolution, Spychalski espouses an optimistic tone that is few and far between on an album largely decrying the pitiful state of the western world. He sees the world being in “a blank state” as an opportunity, a chance to build a better society. Musically, it is a tried and tested dance-rock song that is evidently inspired by Pulp’s ‘Disco 2000’, a funky verse erupting into a powerful chorus that has the potential to be sung in arenas up and down the country.

The band show their ability to write catchy pop songs

Despite all the positives, the album is far from perfect. At 15 tracks, the album is simply too long, especially considering filler tracks such as ‘Why’ and ‘Nobody Stays in Love’ add very little value to the quality of the album and easily could have been omitted. Also, for all the good that the variety of genres bring, the album does at times feel confused and aimless. Old tracks such as ‘Satan, Luella and I’ and ‘To The Door’ are noticeably different in style to newer material like ‘Mikey’s Song’ and as a result sometimes struggle to mesh together. Any future record will benefit from the band having a more focused approach and not feeling compelled to fit in popular older songs with new material written three years later.

Regardless, West of Eden is a fun and enjoyable first attempt by the band that serves as a welcome infusion of glam and energy to an industry dominated by generic pop music.