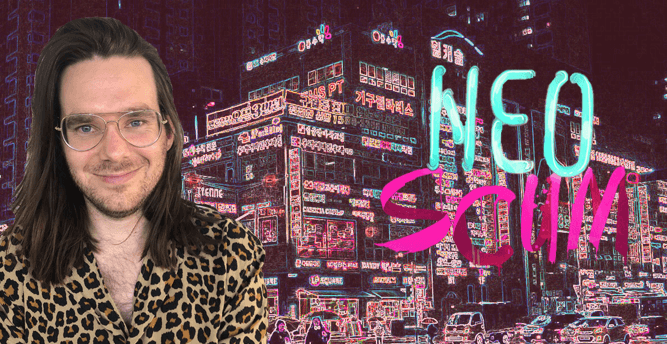 How they levelled up: Gannon Reedy – actual play podcaster

As part of this interview series, I was keen to cover a wide variety of gaming professionals at various stages of their careers in order to provide a thorough overview for students who may be looking to forge their own paths in this direction. That is why I was delighted to have the opportunity to speak with Gannon Reedy from NeoScum. The actual play podcaster not only comes from a background we do not cover enough here, the world of tabletop rather than video gaming, but he also demonstrates the drive required of anybody hoping to work in a creative industry. You might have to keep up with your day job for some time, but if it means getting to do what you love then it is more than worth it!

Gannon Reedy is a cast member of the NeoScum podcast, which his girlfriend has called “like Bladerunner, but dumb.” He acts as Game Master (GM) and as most NPCs for the adventure, setting up scenes and trouble for his players, though sometimes they might be the ones stirring up ways to derail him. This is because NeoScum is not a scripted audio narrative, instead, Gannon and the crew improvise their story using the tabletop RPG Shadowrun as a storytelling tool, allowing the dice rolls to add elements of unpredictability to the world they play in. When the classic Dungeons and Dragons seem like the consistent go-to for the actual play genre, and pop-culture in general, NeoScum does a brilliant job of showcasing a different tabletop option from the broad and diverse catalogue of worlds and rulesets.

Though whilst Shadowrun might make quite a bold divergence from your stereotypical RPG, with its neon-80s inspired cyberpunk to take on fantasy (blending elves and dragons with megacorps and hacking), Gannon’s first foray into role-playing games was your more typical brand of adventure.  He first discovered tabletop at a very young age, playing HeroQuest with his cousins. Gannon adored the well-designed miniatures, the DnD high fantasy setting, and the power Zargon (GM) had to create challenges and puzzles for the other players. Though he never owned a copy of his own.

That would be until his days as a sophomore in college when the game recaptured his imagination. Now armed with eBay as an online tool to hunt down this lost treasure, Gannon not only found a copy but bought it and would begin running sessions for his friends. “I was the one who knew the rules best, so I was the one who ran the games.”

“We all really liked it but the more games I ran, the more often we came against the walls of the system. It wasn’t complicated like DnD so we had to start making up rules on the fly, changing the game here and there to fit the stories we wanted to tell. I started making my own maps and even had two groups going at once. We had this adventure where one group was hunting down the other and I eventually worked them both into the same room. But after a night of having fun, they didn’t want to kill each other when the moment came around. Unfortunate, but they all enjoyed it.”

Unbeknownst to him, Gannon’s cooperative past time was teaching him invaluable skills he would use in his job later in life. Though his social life was not the only source of talent honing during his college years. Gannon studied Theatre Acting in Chicago, and the home of improv had a great impact on his experience there.

“I love writing and acting, improv is like both of those at once. So I was really attracted to it, and it is really hard to be good at it, so I really wanted to be good at it. There was this class at Second City called Comedy Studies, the whole semester was just comedy classes, improv, history of comedy, this class I loved called the context of comedy. A little weird but a total blast!”

This training and study cemented Gannon’s belief that he had to live in that kind of creative environment. So now, Gannon is a company member and Managing  Director for The Runaways Lab Theater, a group known for theatre for delightfully weird performances and creations in the Chicago area.

I would definitely prefer to only be doing creative things

However, like many artists early in their careers who are out there chasing the dream without a lifetime’s worth of well-placed contacts to assist them, Gannon is not yet at the stage where his creativity can fully support him financially. Though when this can seem like a frightening future for some, Gannon demonstrates that whilst it might not be ideal, his world certainly has not ended because of the balance he has to live. “So currently my day job is doing dispatch customer service for a startup, I like it, I’m good at it. The people I work with are sweet.”

“I would definitely prefer to only be doing creative things, I’m always busy from top to bottom, but I’m sure I’ll get there eventually. Right now it’s a balance. I’m currently finishing off this art commission but then I’ll be heading off to my job soon. Later I’ll come back home, eat dinner and try and get something else done and then conk out. My general routine is wake up, work, go to my job, come back, work more, sleep. It’s packed but that’s good, I’ve always liked being busy.”

Although, Gannon is careful not to become a “Crazy Work Monster”, which involves adding an additional aspect into life. Friends. “Hanging out with friends is super important. And make time to hang out with your cool fiance too.”

Sometimes Gannon’s various lives have even coincided, most notably during the events that lead to the formation of NeoScum. When Gannon was in need of a new job, Mike Migdall (who Gannon knew through improv) told him that where he worked was hiring and later Mike would ask Gannon if he wanted to move in after his old roommate was moving out, just as Gannon’s landlord was about to up the rent. The pair would live and work together enjoying, amongst other things, a shared love of RPGs.

“One day when we’re working together, [Mike] turns to me and says ‘Have you heard of this game called Shadowrun?’, and just like HeroQuest, I bought the book, learnt the rules and we had all these people that wanted to play for whatever reason. We played like four or five games like this and I would record them on my phone. This was mostly so that I could remember what happened or to pull out a proper noun that I’ve forgotten. And listening back the recordings were pretty funny. So this grew, different people joined and left, and it became a little side thing where we recorded a couple of podcast episodes, piloted it. Eventually, after what felt like a super long time, we released it. That was the inception of NeoScum.”

It was awesome to get to talk with Gannon. He is a creative just a few steps ahead of me in his journey and has shown that, even if the road is long and hard, things keep getting better. But as he said with his final piece of advice, patience is required to chase down an artistic career.

“It’ll take time. Sometimes it doesn’t, sometimes it’ll instantly work out for you and it’s very nice when that does happen. But, often you’ll be running into brick walls for a year, for two years, for three years, though if your heart still sings, and you can see that this is the thing you want to do, keep swinging at it. As long as you aren’t hurting yourself or your family, it is your passion and it’s okay if it’s taking a long time. You shouldn’t beat yourself up. Still, be critical of your work and keep improving, but don’t be unnecessarily cruel to yourself.”

“Also, whatever you do, even if you know it’s bad, finish your project. Don’t start something and not finish it. It’s a lot easier to get somewhere when you have a finished product rather than a bunch of attempts.”

If you want to find out more about Gannon Reedy you can find him on Twitter @gannonreedy and you can check out NeoScum at neoscum.com.