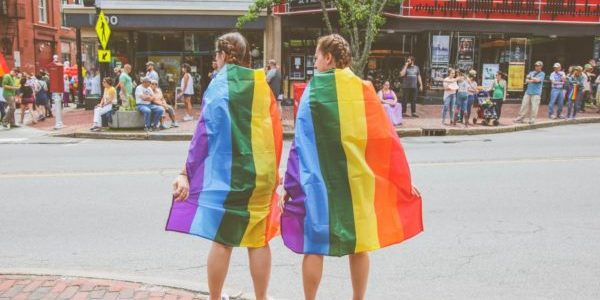 As Wilde himself declared in the preface to his 1891 edition of The Picture of Dorian Grey, ‘There is no such thing as a moral or an immoral book. Books are well written, or badly written. That is all.’. This addition to the classic text came as a result to the huge backlash it received, due to a variety of taboo topics, particularly the heavily implied homoerotic relationship between Basil and Dorian. After Wilde’s death, The Picture of Dorian Grey became iconic, lauded as one of the first novels to portray a gay protagonist. However, it’s arguably not the best representation Victorian Britain could have been given. How, therefore, does the representation not just of the Gay, but all LGBTQ+ inclusive identities evolve through time?

On the eve of World War One, Thomas Mann published his world-famous masterpiece Death In Venice. The novella covers the tale of Gustav Von Aschenbach, a successful writer who visits Venice during a cholera outbreak, and in a Lolita-esque twist falls in love with a young polish boy on the beach. Being a widower whose only daughter is married, his loneliness drives him to follow the boy and his family around the city, and with morale boosted by his infatuation, he begins to explore his creativity and push past his block. Much like Wilde, Mann spends much of his time musing on art and beauty, wisdom and passion, and asks how far do we go to create a masterpiece? Beautifully written, with expert combinations of mythology, passion and symbolism, this is poignant progress on where Wilde left off.

Written by the 19-year-old Françoise Mallet-Joris and published in 1951, The Illusionist explores some incredibly complex subjects. Narrated by Tamara, a Russian émigré who was once hopelessly in love with a young woman called Emily, she turns her attention to Hélène, the daughter of her current partner. Slowly she works her magic on the 15-year-old, who falls head over heels for her glamorous bohemian lifestyle. This is a truly heartbreaking read and we are left to wonder if it is Tamara or Hélène who has the most tragic ending. Stunningly written passages with a painfully accurate representation of teenage sexual longing and confusion, this is well worth the read, but still leaves us with the classic tragic and conforming ending most LGBTQ+ works give us.

Annie On My Mind

“Have you ever felt really close to someone? So close that you can’t understand why you and the other person have two separate bodies, two separate skins?”. Written by Nancy Garden and published in 1982, Annie On My Mind is a novel so timeless it feels like it could have hit the shelves only a few weeks ago. The most organic representation of an LGBTQ+ relationship on the list so far, this is the tale of best friends Liza and Annie. Told from Liza’s point of view, the two fall in love gradually but more deeply than they ever imagined. Knowing that many around them would be against their love, they chose to follow their hearts, building a thoroughly authentic and realistic experience for the reader, no matter their sexual orientation. Banned from school libraries and publicly burned in Kansas City, this is not only moving text, but historically important in LGBTQ+ history.

If I Was Your Girl

Eye-opening, thought-provoking and inspirational are not enough to describe If I Was Your Girl.. Written by transgender woman Meredith Russo, this 2016 novel covers the story of Amanda, a trans woman who has had to leave her life behind to start a new high school and start afresh. She finds a group of wonderful supportive friends, and falls in love with Grant, one of the sweetest men to grace the fictional world. Despite the quite dark topics addressed in flashbacks, this is predominantly the tale of a young woman finding her way in the world. This is a beautifully natural tale, finally filling in the gaps in LGBTQ+ literature.

If there is any book I could thrust into the hands of readers, it would be Alice Oseman’s Radio Silence. A true representation of the Millennial and Gen Z experience, as well as the LGBTQ+, there’s no topic Oseman doesn’t cover with realism, poise and passion. The protagonist holds herself up to ridiculously high standards, her dreams being in academia.

Paralysed with anxiety orientated around her future and the toxic education system, it’s her platonic love for her demisexual best friend Alec which helps her through it all. Alec desperately wants to help his best friend, but he struggles to manage his highly popular podcast, along with crippling depression and dealing with his abusive past. The plot is bewitchingly relatable, the cast a beautiful patchwork of the diverse world we live in, Radio Silence truly proves how far LGBTQ+ representation has come in literature.

How to make the most of your required reading list