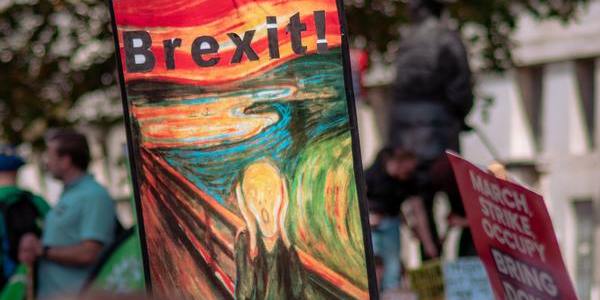 Ever since Brexit, most industries have been drawn into the debate between Left and Right, Remain or Leave. The publishing industry is no exception. The British publishing scene is world-leading, particularly due to its extensive legislation on creative copyrights’ protection. Facing the possibility of global decline in a post-Brexit climate if these attractive rights are not protected, the sector is in danger of decreased outside investment. Currently accounting for 36 per cent of all book exports, the European Union is its most important market, and so it is no wonder that the publishing industry is decisively anti-Brexit.

However, this sentiment is not merely limited to conversations between publishing employees and employers in the privacy of their own homes. In fact, it appears that this anti-Brexit feeling within the industry has affected the way in which Brexit is being portrayed within literature, and more importantly, what side of the discourse is being presented to the public. The Story of Brexit by Jason Hazeley and Joel Morris, a hilarious tongue-in-cheek satire, disguises its Remain sympathies behind a veil of comedy. While undoubtedly entertaining, it is very clear that only one side of the Brexit story is being told throughout. Another recent publication, Rabbitman by Michael Paraskos, contains Remain and Leftist undertones within its fantasy narrative, which envisions that both the election of a Right-wing American president and Britain’s vote to leave the EU were the direct result of a pact made with the Devil. Even publications, such as The Penguin Book of Brexit Cartoons and Can You Brexit?:Without Breaking Britain, attempt to poke fun at those who voted for Brexit in the first place by trivialising the political turmoil we are currently facing into easily digestible quips.

Although these books are perfectly valid, amusing, and interesting ways to deal with the political whirlwind we are in, it begs the question: where are all the pro-Brexit books? In a recent article by The Guardian, it was noted that publishers and book shops are less likely to publish or sell books that are Right-wing. David Shelley, of the publishing giant Hachette, commented that while it is “important to uphold free speech… social justice is also a big part of our mission,” which roughly translates as: books that do not match our ethos are less likely to be published. Book agent Toby Mundy also remarks that there is a clear divide between the “older generation of commissioning editors” who publish any argument as long as it is “interesting, well expressed and adheres to basic values of tolerance and decency,” and the “younger editors” who are “more passionate about contemporary political struggles and take a narrower view about what they and their colleagues should publish.” Some publishing houses themselves are unafraid to admit their Left and Remain bias. Veruschka Selbach, the managing director at Pluto, comments that the role of her publishing house is to “identify and support radical currents in the world at large by publishing books that are useful to those currents.”

Despite its Left-wing nature, I believe that the publishing industry has a moral obligation to provide more representation for both sides of the Brexit debate and thus the entire political spectrum. After all, the results of the referendum were 52 per cent versus 48 per cent. Shouldn’t the books on our shelves and in our bookshops reflect this split of opinion? It is not hard to imagine that the over-saturation of Remain books being published could have implications in the next general election. Those who are only exposed to one way of thinking are more likely to internalise and adopt that view themselves, perhaps depriving them of a fair and balanced array of judgements they can choose from themselves.

For a fraction of the cost of a book, a newspaper can reach wider circles and spread overtly political opinions more quickly

That said, publishing houses do not wield the ultimate power in this matter. Popular Right-wing newspapers such as The Daily Mail, of a decidedly pro-Brexit stance, hold a huge sway when it comes to moulding the public’s opinion on which party to vote for. The daily, easily digestible messages in favour of Brexit could potentially influence voters to a greater extent than the odd book or two read by a much smaller proportion of the population. For a fraction of the cost of a book, a newspaper can reach wider circles and spread overtly political opinions more quickly. In that case, do the Leftist, pro-Remain messages of the publishing industry provide a necessary counterbalance to this?

All these things are really interesting ideas to consider. But to finish, I think the words of author Ali Smith in her novel Autumn best sum up Brexit’s division of culture and our industries most sharply: